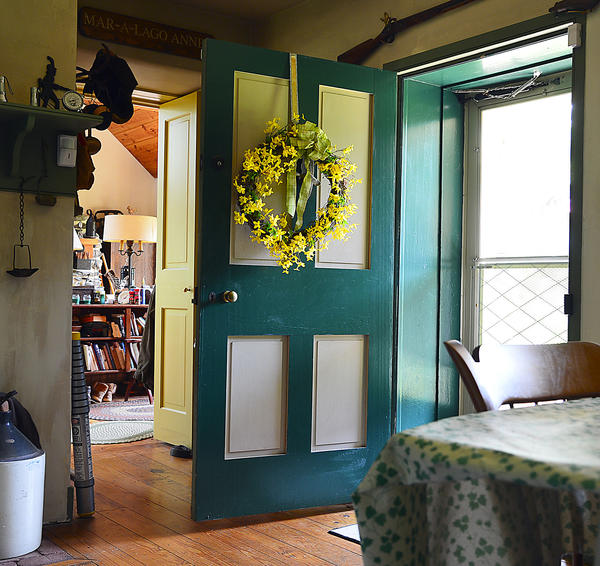 Chestnut Grove Road runs roughly north from Harpers Ferry Road, curling around Elk Ridge on the east. Well up the road on the left, signs announce two addresses at one entrance. Two drives branch almost immediately from this entrance. The right one leads to a farmstead on low ground not far from the road. The left one soon diminishes to a trail that winds slowly up through woodlands for more than a mile. At last a broad, grassy clearing appears on the top of the small mountain. In it, a small two-and-a-half story three-bay house faces east toward the lane, utterly isolated.

Chimneys rise at the gable ends of the house, and a narrow double porch supported by slender square posts covers its front façade. Attached to its right stands a one-story addition with a massive stone chimney curving up its end wall. This addition projects from the main block, with a door opening into its single room from the porch. An interior door also accesses this area from inside the house. A bulkhead in the floor of the front porch opens into a low basement, now occupied by necessary plumbing and two bicycles.

This has always been a summerhouse. The name appears in the deed. The land was part of that vast tract in South Washington County that the Indian Chiefs of the Five Nations deeded in 1727 to Israel Friend, a Quaker. Later governments, ignoring their Indian predecessors, made other dispositions. David Ross, Richard Henderson, Samuel Beall Jr. and Joseph Chapline established an iron furnace on this site in the mid-18th century. After passing through other owners, Col. John McPherson and his son-in-law, John Brien, an ironmaster from Pennsylvania, received a patent from the state of Maryland for 9,548 3/5 acres designated Antietam Ironworks on May 14, 1810. Brien became the onsite manager of the ironworks.

The struggles of the Summer House

When McPherson and Brien acquired the site in 1808, they petitioned to patent it in order to consolidate holdings and to acquire land between established claims. Surveying was more art than science at that time, and there were often vacancies between claims, which might be acquired if the land were resurveyed.

There were also faults or overlaps of claims that had to be resolved before patents were issued.

When McPherson died in 1829, Brien and his son, John McPherson Brien, assumed management of the ironworks. Brien senior died just five years later, and his son struggled with the debts left behind until his own death in 1849. Four years later, Mrs. Brien attempted to satisfy these debts by dividing the property and selling small parcels. By 1853, she sold the entire ironworks. Jonathan Meredith and John Nicholson Spears were appointed trustees to sell its assets. An advertisement placed in the Baltimore Sun on Oct. 19, 1863, by these trustees offered parcels of the Ironworks, and parcel No. 50 was described as “A tract of land, designated on the plat as ‘The Summer House Farm’…containing about 618 acres and improved by a dwelling house and other buildings…”

Lewis and Elizabeth Watson and Augustin and Elizabeth Biggs purchased this parcel and another in 1860. The 1860 census shows Watson as a well-to-do miller living in Boonsboro. Biggs was a prominent physician living in Sharpsburg who, a few years later, would treat wounded soldiers following the Battle of Antietam. Augustin Biggs died, and this parcel passed to Stella McKeen Biggs in 1885. She sold it four years later to her brother, Charles G.Biggs, the first president of the Maryland State Horticultural Society, and Hamilton B. Showman. They, in turn, sold the property to E. Frank Bussard in 1908 for $2,500. Three years later, Bussard sold it for $2,000 to Lancelot Jacques, an orchardist from Smithsburg, who established Lookout Mountain Orchard there.

Bonnard Morgan, a neighbor and once owner of the property, said Jacques clear-cut the trees from the property, terraced the mountain and planted his orchard. He said the orchard aged out about 1946, and the land became overgrown with Virginia Pine during the next 50 years. In the early 1960s only a single apple tree remained. A forester recommended cutting the pines, which was done about 1996 and, after they were gone, tulip poplars grew in their place.

Fred Glaise purchased the property in 1929 and held it for 20 years. It then passed through several short-term owners until purchased by Calvin and Olive Cobb in 1968 for $5,300.

Richard and Caroline Mayfield live in Chevy Chase, Md. In 1983, they were looking for a summer place. After searching for months, they were ready to admit defeat, when they encountered the Cobbs at a party. Upon hearing of their search, the Cobbs told them they had just put their summer home on the market and suggested they look at it. It had been empty for 10 years.

The Mayfields found the outbuildings in a state of collapse and the addition to the house beyond repair. But the house charmed them with its privacy and views. Here was a small place with more than enough space for grandchildren to stay when they visited but not so large that upkeep would be onerous. The more than 101 acres held two ponds in the woods, wild turkeys and deer. It was what they wanted.

The front and back façades of the house, as well as the fireplace in the addition, are laid in Harpers Ferry stone, long slender chunks of irregular rock collected from the immediate area. Stucco covers the end walls of the house. Inside, a steep, closed winder staircase divides the downstairs into two rooms. Fireplaces with simple mantels center on both end walls. The upper level has a similar layout.

The house appears to date from around 1850, prior to the sale of Ironworks property. Who built it isn’t clear, but it is almost certainly the house mentioned in the Ironworks advertisement. The Mayfields were respectful of the house and set about to restore it. They hired Boonsboro architect Eleanor Laikin to design the replacement for the addition and oversee restoration.

When the original fireplace in the addition was dismantled, the stone from the chimney was salvaged to build its replacement. When more stone was needed, the masons went into the forest and collected more. This is the largest room in the house. The vast fireplace is offset to the right, with windows on its left. A bath tucks into the southwest corner of the room. Shelves are filled with books, Dick’s collection of antique oil lamps and pictures of wild turkeys.

The kitchen fills the north side of the first floor. Too small for the amenities of a modern kitchen, it is fitted with a soapstone combination sink/stove with a small cupboard above closed by a raised panel door. The refrigerator hides in a cupboard. A simple sitting room occupies the south side of the stairs.

The rear façade of the house is completely covered with a deep double porch enclosed by Anderson windows and doors both up and down. The lower level has a brick floor. The stone wall of the house is exposed on both levels, and the windows fill the space with light. The upper level is a sleeping porch, with four single beds, while the second floor of the house has two small bedrooms separated by the enclosed staircase. The attic holds yet another two beds. The view from the porches expands across the Potomac into Virginia and West Virginia.

Gable ends of the house were again stuccoed. A patio was built that now fills the corner between the addition and the lower porch, and the original lintel from the fireplace, a huge chunk of wood more  than 10 feet long, became a bench here.

The Mayfields have furnished the house with simple, functional old furniture, everyman antiques that they feel are appropriate for the house: a dry sink, a sugar box, and mule-ear wood-seated chairs. Grandchildren visit, watching the turkeys, playing in the ponds and sleeping on the porch. It is peaceful and yet exciting.

For more than 25 years, on nearly every weekend, Dick has left his office at noon on Friday; he and Caroline stop in Boonsboro for groceries and then go to the Summer House for the weekend, returning Monday afternoon.

Dick is 92 this year. He still practices law three-and-a-half days a week, is the senior partner in his firm, and has a hearty laugh that comes easily. Caroline’s smile is quick, her manner welcoming and upbeat. Caroline thinks Dick likes coming in the winter best because he loves to build a roaring fire in the fireplace. But it is a little harder to make the trip to the summerhouse. They have installed handles in the steep stairway to secure their steps up and down, but, while they are not getting up to Washington County as often these last couple of years, they make few other concessions to age.

P.S. Many thanks to Sandy Izer for her intrepid records searches, which have added to my understanding and to this article.

Bay: a space along a façade of a building defined by a window or door.

Closed winder stairs: a stairway, enclosed with walls and having doors top and bottom, with some treads wider at one end than the other so that a turn can be made without a landing.

Raised panel: a wood panel with beveled edges held by stiles and rails to make a door.

Lancelot Jacques: (pronounced “jakes”) This name has been part of this county’s history since Jacques joined with future governor of Maryland Thomas Johnson to establish an iron furnace at Green Spring in 1766. Jacques was a French Huguenot who emigrated from England and first settled in Annapolis. However, he never married, and all subsequent Lancelot Jacques are descendants of his nephew, Denton Jacques.

Lookout Mountain Orchard: Jacques chose the name because Union troops had established a lookout in that vicinity during the Civil War. A photo of this structure by Alexander Gardiner shows a small, crude log structure that could elevate observers to see beyond surrounding vegetation. The exact location of the lookout is not known.

This article appeared in the Herald Mail Newspaper, Hagerstown, Maryland,  July, 21, 2013 the 199th in a series of articles by Patricia Schooley about the historical and architectural treasures of Washington County.