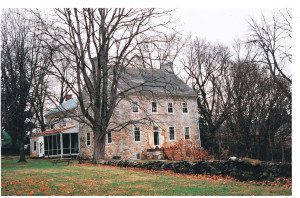 Manor Church Road wends back in time among farms that were established early in the history of the county. This country road is sometimes bordered with stone fences, and the rolling landscape dotted with stone buildings. On the south side of the road, behind a stand of trees and a tall fence, a large stone house sits close to the road but with its back turned. Built around 1800, Search Well faced an earlier road well to the south of it. The vestiges of the original driveway from that road remain, held by a tall stone wall that curves around before the house; but both terminuses are indistinct. It is not clear exactly where the earlier road ran or where the driveway went after it passed before the house.

The grounds of this elegant home are now about four-and-a-half acres and slope away from the building toward a stone springhouse that sits low and centered in the long space which once met the original road. Accessible from both sides, the springhouse guides water through its channels from a spring, which rises just to its west and is enclosed by a stone vault. The land also slopes from west to east and has been somewhat leveled in the center. The old driveway retaining wall is tallest on the west and terminates a little after it passes in front of the house. There is a section of new stonework directly in front of the house that fills what was once the entrance to the “cave”—a long unused root cellar. The yard is shaded by mature trees and landscaped in keeping with the age of the buildings. A number of gardens filled with perennials and boxwood are arranged in formal patterns. 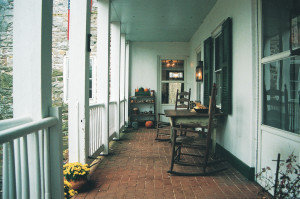 The stones in the house are evenly coursed and finished with German raised point. The corners of the house are quoined with massive, hewn stones. Windows have flat lintels made from seven stones, the central one a key; and there are nine-over-six sashes set in the beaded, pegged frames on the first floor and six-over-six sashes on the second level. The original main entrance is located in the second bay from the west of the four-bay façade and is reached by stairs. Rectangular panels, the height of the door and the four-light transom, have been plastered on either side of this entrance and inscribed with an egg and dart pattern which corresponds with the egg and dart molding used in the cornice of the front parlor. (This trim was probably added during a renovation in the second quarter of the 19th century.) The single-bay Greek Revival entrance porch with octagonal fluted columns and pilasters will eventually be returned to complete the entrance. Because of the slope of the ground, six-light basement windows are also revealed in this façade, giving the house a massive aspect.

Inside this entry, the house is divided by stairs and an entry hall which goes through the house and exits on the lower of the double porches that extend across the east side of the ell. Stair brackets are scroll cut, and the spandrel of the stairway is painted to resemble panels. The hall floor has been painted in alternating black and white diagonal squares. The front parlor has a fireplace with a period mantel and marbleized baseboards. A wide plaster cornice molding incorporates the egg and dart pattern.

To the west of the entry hall, a fireplace with its original mantel serves the long, narrow dining room. It is possible that this space was once two smaller rooms and that the intervening wall has been removed. Beyond this, a back parlor and kitchen fill the lower level of the ell. A small, one story addition was made to the west end of the ell, and the quoins were removed from the corner of the ell and incorporated into the corner of this room. This small space is now a pantry and may always have been intended for this purpose. Beside the pantry, along the length of the ell, a screened porch accesses both the pantry and the back parlor.

The most striking feature of this home is the wall separating the two upstairs chambers above the front parlor and the dining room. This wall is built of vertical, beaded boards with chair rail and baseboards on both sides; and it is hinged at the ceiling. It could be raised by means of a rope and pulley, then secured to the ceiling with the great eye screws that are still in place. This building predates the Manor Church, which was built about 1830, and tradition reports that this large space was used as the meeting place of the early Manor congregation that began to worship together in the 1790s.

In 1861, Manor Church Road was laid out in its present configuration, skirting close to the rear of this house and changing its primary entrance. Visitors now pass the fence and shrubs that guard the house from the road and enter the tree shaded yard across a stone patio, proceeding onto the lower of the double porches to the kitchen door. This porch shelters three doors into the house and is surrounded by a simple banister with round balusters and two gates. When closed, the banister appears to contain the porch without entrance. To the east of this entrance is a hand-dug well and beyond that a small, story-and-a-half stone building with a single room on each floor, both still clad in their original white paint with blue-green woodwork. To the west, beside the ell is a stone bake house with a small workroom attached on the south. Both sections of this building may be entered from the outside by separate doors. An interior door between the rooms also exists. Beside the bake house is a square, stone smokehouse with its original chamfered post and cross pieces for hanging meats as they were smoked.

Originally this complex of early buildings was called Linden Hall. Since there were other farms with that name in the county, recent owners renamed their home Search Well as they labored over the restoration of this lovely property and placed it in the National Register of Historic Places. Well-loved and well-cared for, Search Well faces back toward its beginnings but is prepared to serve as a gracious and inviting home in the 21st century.

Epilogue: In February 2001, Allison Severance and her husband Rick Henry purchased Search Well. The last owner had upgraded the kitchen by adding an island, a hanging pot rack and an elegant stove. But the porch is still in the cellar. Allison and Rick look forward to rebuilding this porch and creating a new traffic pattern that will bring guests to it and the original front door. The couple is presently restoring the servants’ quarters as Allison’s pottery studio. The brick bake oven and the springhouse are also on the long list of projects for Search Well.

This article appeared in the Herald Mail Sunday, September 1, 1991 as the 27th in the series.