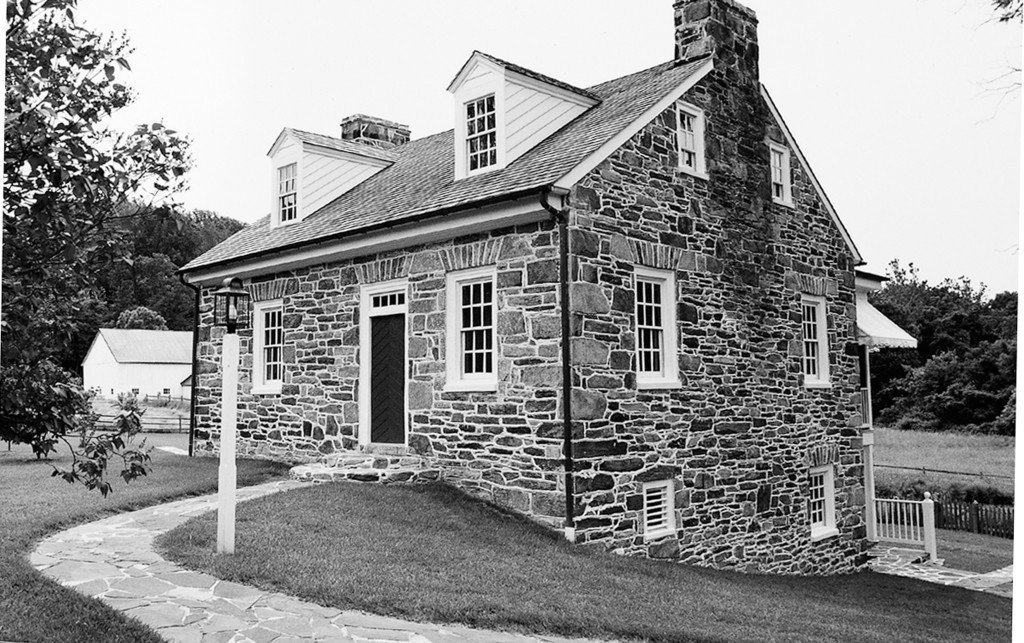 Garretts Mill Road is cut into the rolling landscape, halfway up a hill, as it curls around a valley formed by Israel Creek. A small stone house snugs into the slope below the road. It overlooks rolling pastures that meet the woods along the creek. The house is a single story with a steep roof and two gable dormers of later vintage. It has two irregularly placed windows on either side of an off-center door with a four-light transom. Quoins finish both the corners of the house and the window openings, a rare feature. Large voussoirs form flat arches above windows and doors. In a few places, the builder used a wider stone in the arch, then cut a groove in it to simulate a joint. This groove was then filled with mortar so that the larger stone appears to be the same size as the others in the arch. 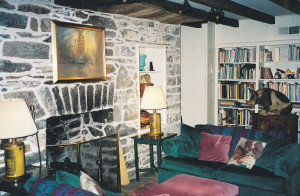 One of the several stone fireplaces in the Robert Clagett House. Photo by Natalie Brown.

Architectural details indicate that this small structure was built between 1770 and 1790. At one time it was the miller’s house for the mill a short distance away. Robert Clagett’s father Dr. Zachariah Clagett and his grandfather Posthumous Clagett were both large landholders in this area. In 1809 Robert received, from his father, a part of a tract of land that had been patented in 1786 as The George. This may have been the mill site, but early land records are not clear. It is certain that in 1854 Robert Clagett’s heirs sold 130 and 1/8 acres of land, parts of The George, Keep Trieste, King Cole, Boteler’s Ramble and The Resurvey on Grim’s Delight and that this parcel included the mill and this small house.

In 1811 land records called the mill Clagett’s Mill, indicating that it was run by Clagett at that time. In an 1824 advertisement, Robert Clagett offered, …I will sell a first rate Merchant Mill, an old Mill, Saw Mill and miller’s House convenient to the mill with, from 5 to 40 acres of Land. The following year his son-in-law Edward Garrott purchased the site. The mill became Garrott’s Mill, and the spelling of Garrott was corrupted to Garrett by the late 19th century. 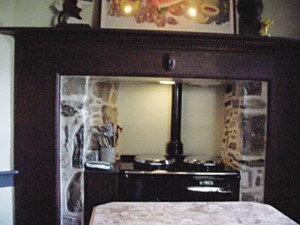 A modern stove has been fitted into the original stone kitchen fireplace. Photo by Natalie Brown.

The little house is unusually well finished. Changes had been made over time, fireplaces filled in, paneling added, sashes replaced; but most of the original fabric remains. When the house became available, Richard and Nancy Hamilton were looking for a smaller house and were charmed by this one. They purchased it May 1, 1998. After placing the house in the National Register of Historic Places, they hired a skilled restoration contractor and embarked on a year of discovery.

Each gable end of the house has large interior stone chimneys. The main floor originally was divided into three rooms, a single room on the west and two rooms to the east. The western room has a twelve foot wide chimney column with a firebox in the northern half. The broad chimney and the off-center firebox were built to accommodate the flue from the cooking fireplace in the cellar. A later renovation of the house divided the room in half, with the partition cutting across the mantel that stretched the breadth of the chimney. The first thing that the Hamiltons did after buying the house was to remove this wall to reveal the long mantel, the paneling and the woodwork around the fireplace as it was meant to be. Then the concrete Romanesque arch that had filled in the firebox was jack hammered out to reveal the original stonework. Remnants of plaster around the edges of the fireplace indicated that it had originally been finished with plaster. Reluctantly, the stonework was again covered with plaster to replicate the original. Once wallpaper was removed, the silhouette of an overmantel with crossettes appeared. This has been replaced using reproductions of molding found in the house. It is a charming room with doors at either end, dominated by the fireplace but not overpowered by it. 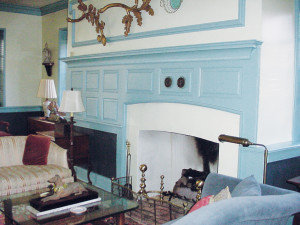 Massive stone corner fireplaces, set back-to-back, serve the smaller rooms. The north room, now the dining room, has a paneled mantel with dentil molding. Drawn plaster cornice molding was added to this room, probably when the firebox opening was changed to the Romanesque arch. At one time, there was a medallion at the center of the ceiling. One handmade wooden peg is still set in the wall in this room, the last of many that were fixed in the plaster at two foot intervals around both the living and dining rooms. When styles changed, these were sawed off, leaving the wooden butts embedded in the walls to tell the story. What so many pegs were used for is unclear.

The south room’s mantel is simple with beaded edges. The house is small, perhaps 1,400 square feet on three floors; and the south room was to be the kitchen. It was at this point that preservation and practicality seemed to be at loggerheads. Keeping the large fireplace and having a modern kitchen appeared impossible in such a small space. Always working on the principle of doing “the least amount of damage we could do to the house and still use it,” the Hamiltons finally found a solution. The firebox opening has been enlarged to accommodate a new gas stove of old design. The mantel’s overboard has been cut back and the mantel itself raised on the wall fifteen inches to fit around the new opening. Simple plinths similar to ones used at the interior door architraves fill the space between the original mantel and the floor. Molded woodwork and chair rail finish each room. Ceilings are ten feet high, and it is probably these high ceilings that allowed the builder to boldly add such large fireplaces to such a small building and still have it work visually. 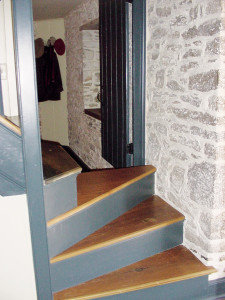 A closed central staircase rises to the second floor. Here the Hamiltons have added a shed dormer on the back of the house to enlarge the space without greatly changing the profile of the house. Two rooms and a bath are finished with beaded board and plaster walls. Ceilings are seven feet high. Lath on the first floor is split; but that on the second is sawn, indicating that the upper level was not finished when the house was first built. Poplar floors upstairs are original, as are the wide-board oak floors in the two small rooms downstairs.

The floor plan of the cellar is similar to that of the first floor. The cooking fireplace had been filled with stones, and only the north edge of the original firebox still remained intact. The fireplace was rebuilt with a narrower firebox than the original, using stones from the fill. The floor has been excavated to make the ceilings a comfortable height. During this excavation, holes at floor level–like scuppers on a ship–were discovered beneath the south-facing windows. The purpose is not quite clear, but Rick has been told that a spring once rose in the basement. Perhaps these scuppers permitted the basement to drain.

The two bedrooms are small and dominated by the stone walls that support the corner fireplaces above. The stairs into the cellar originally descended to a landing three steps above the floor. Steps on either side of the landing, set at right angles to the main stairs, served the main room and the south room of the cellar. This was discovered when paneling was removed to reveal both the door and the short stairs on the east. These steps have been restored.

Windowsills on the house had rotted and had to be replaced, but the frames were still solid. These frames, with molded faces and ovolo trim, are shaped from a single piece of wood rather than having moldings applied. This technique prevents rotting between separate pieces of wood but must have been most difficult to make. Most of the window sashes had been replaced; so new, period six-over-six sashes have been made and hung. The main entrance has a new door, built of battens held together with rose head nails and hung on HL hinges copied from others in the house. 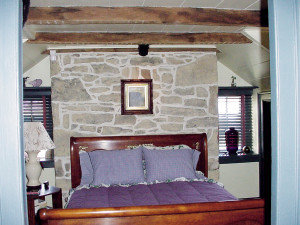 The cellar openings on all but the south side were probably ventilators with square rods set horizontally in the frames. One of these openings has been enlarged to create a window that meets county building code. When the kitchen was in the cellar a modern window was placed over the kitchen sink. This has been rebuilt with the extra arch stones from the ground floor fireplace. This window now has an arch similar to the ones on the main floor. New window sashes were installed, leaving a single ventilator in place behind glass.

Physical evidence suggests that the front and back doors had small stoops originally. A full-width front porch with a roof supported by square, tapered posts was added in 1910, and a tiered back porch with chamfered posts was added more than 60 years ago. The back porch has been enclosed with sliding glass doors and screens. A deck with a Chinese Chippendale style rail has been added at the top of this double porch.

A pressing issue in restoring the house was the location of utilities. Not even purists live without plumbing, central heat and electricity. The cellar, with its stone fireplace and ground level opening onto the quiet pasture, was too valuable as living space to sacrifice it to utilities. Building an addition would compromise the profile of the little house, one of the few in the county that has never had any addition. In the end, a space was excavated beneath the lower porch and all the utilities placed in it. Chases were placed in corners and behind shallow walls to allow services to reach all floors. 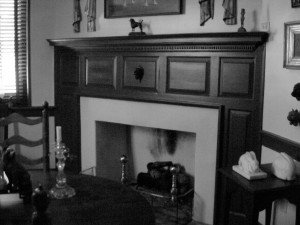 Concrete steps and walls were removed from the back of the house, exposing caches of large, flat stones. These have been used to make new retaining walls, steps and to repair stonework elsewhere in the house. The whole surface of the front yard had sloped toward the house, creating a moisture problem. To move storm water around the house, the east yard was excavated to correct this problem. A small pond, newly dug, is filled with water piped from the spring in the back yard.

Each day brought new discoveries. Shards of Gaudy Dutch and Staffordshire pottery appeared in excavations. A bulky, square, red-clay hearth tile emerged when the fireplaces were restored. Even a piece of a B&O plate has been found, a reminder of the railroad that once ran just to the west. The little house with its fine workmanship has a new life to welcome a New Year, and the Hamiltons will soon move in to begin the new millennium.

Note: Merry Stinson wrote the National Register nomination upon which this article is based.

Epilogue: The house is finished now, and furnished as well. Dormers had to be redone to more closely resemble the earlier ones and the railing at the rear was removed so that tax credits could be earned. Rick notes that, “as we were finishing the house we did find a lead figure eight where the front stoop would have been that would indicate some kind of highly finished stone porch tied together with the figure eight, but we didn’t find any stone that was that highly finished or had a cup place where the tie would fit. More mysteries! Hard to imagine all the little details now that the house is ‘done.’”

This article appeared in the Herald-Mail Sunday, January 9, 2000 as the 123rd in the series.