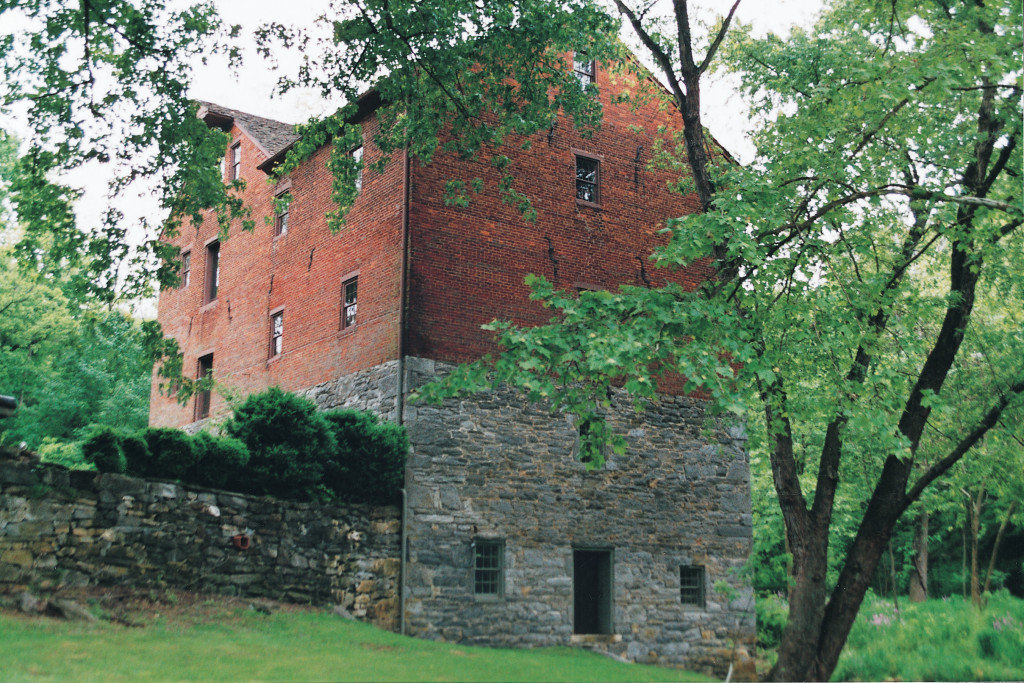 Just above the confluence of Little Antietam and Antietam Creeks in the southern part of the county, Keedysville Road makes a sharp turn and heads east along the north bank of Little Antietam Creek. A small community of buildings gathers at this turn in the road, remnants of a commercial complex that developed in the early 19th century. The focus of this community was the gristmill that rests at the edge of the creek, well below the road and just visible as the road turns the corner.

A driveway descends to the mill, dividing to pass along the north side of the building at the second level and meeting a door in the east end of the building on the lowest level. The setting is tranquil and private, another world nestled beneath the road and the homes above. Stone retaining walls are set into the bank that rises to the road, and old foundations extend from the west side of the mill along the creek. These foundations and the ghost of a gable on the mill’s west wall are the last vestiges of a sawmill that once shared the property. 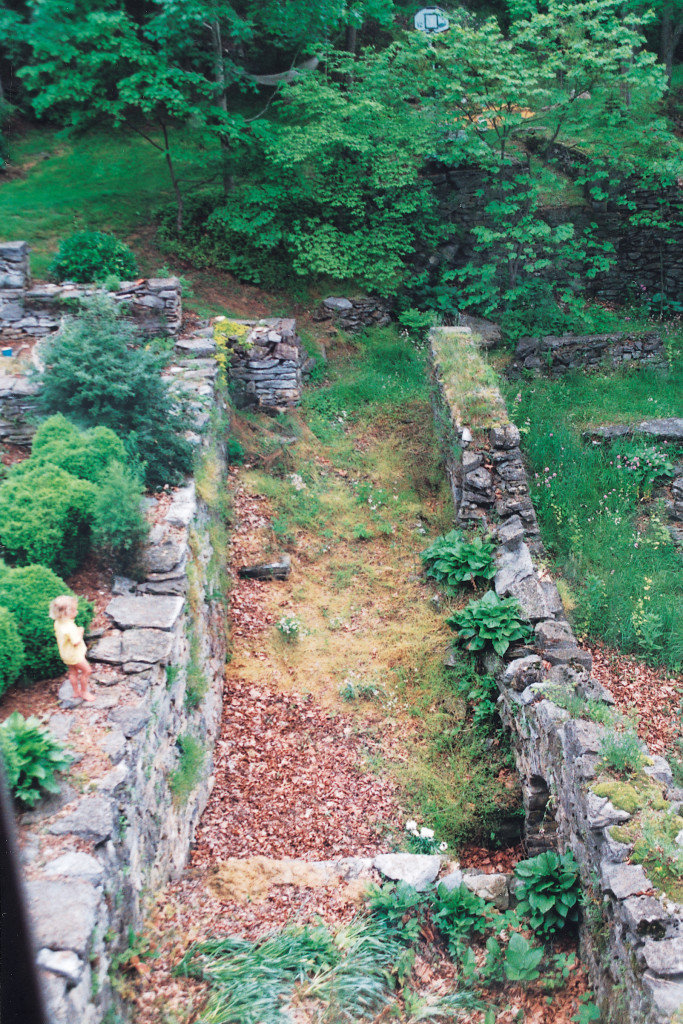 The Millrace at Pry Mill. Photo by Natalie Brown.

The mill has five stories, with its foundation anchored in the stream on the south side. The first two stories are stone, with quoined corners. The upper three levels are brick laid in common bond, with a cross gable at the west end of the roof. At each level of this gable end are doors that open into space, for no porches or steps project beyond them. These doors have been converted to windows. Wooden lintels top the windows and doors in the brick section.

Joseph Chapline, founder of Sharpsburg and the owner of vast tracts of land, conveyed twenty and one-quarter acres of land to Andrew Baker, who later passed it to Robert Smith. The parcel of land was typical of a mill site: long and narrow, including both banks of the creek. This elongated property allowed the miller to control enough of the stream to assure that other millers would not flood his mill or be able to access his pond, the source of his power. Charles Varle’s 1808 map of the area shows a house with the name R. Smith in the immediate area but no gristmill, indicating that the mill had not yet been built.

In 1818, Robert Smith’s will bequeathed the mill property to his grandnephew Samuel Merritt Hitt, who apparently built a stone mill on the parcel. Hitt was also influential in the 1830 construction of a bridge over the Antietam Creek just below his mill (now known as Hitt Bridge). In that same year, Hitt was party to an Article of Agreement with the Justices of the Levy Court in which he agreed to repair the road from the bridge to the summit of the hill toward Hess’s Mill in Keedysville. When he made these repairs, he changed the course of the road so that it passed beside his mill, as it still does.

Hitt and his family moved to Illinois and in 1846 sold the mill property to Lewis Watson, who resold it the following year to Samuel and Philip Pry. Samuel became the sole owner in 1850, and the mill remained in the Pry family until 1941. 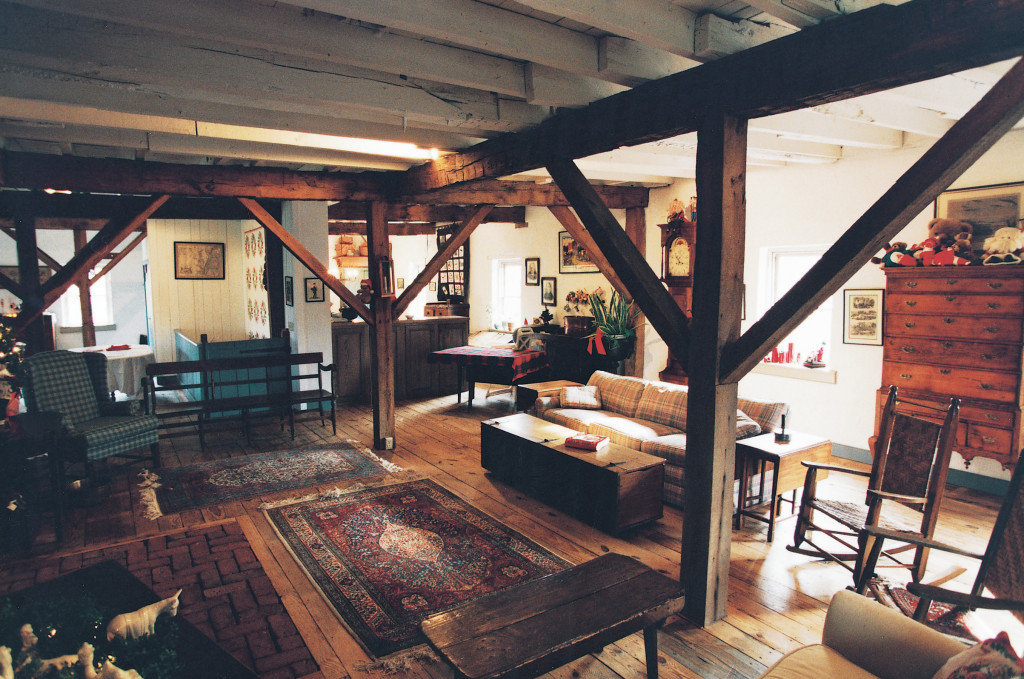 Samuel Pry rebuilt the two-story stone mill with brick, and the mill assumed the shape it still has. The first two levels are the coursed stone of the original mill, which is fully exposed on the creek side and pierced with segmentally arched openings. There was a small corner fireplace on the second level, probably where the office was. Because of the grain dust, fireplaces in mills were dangerous, so heating was quite limited. Great hand-hewn beams carried on chamfered posts support the upper levels. The posts on these two original levels are topped with short horizontal members that spread the weight carried by the beams. On the upper three floors, the posts are not chamfered and are supported by a pair of diagonal braces between the posts and the beams. 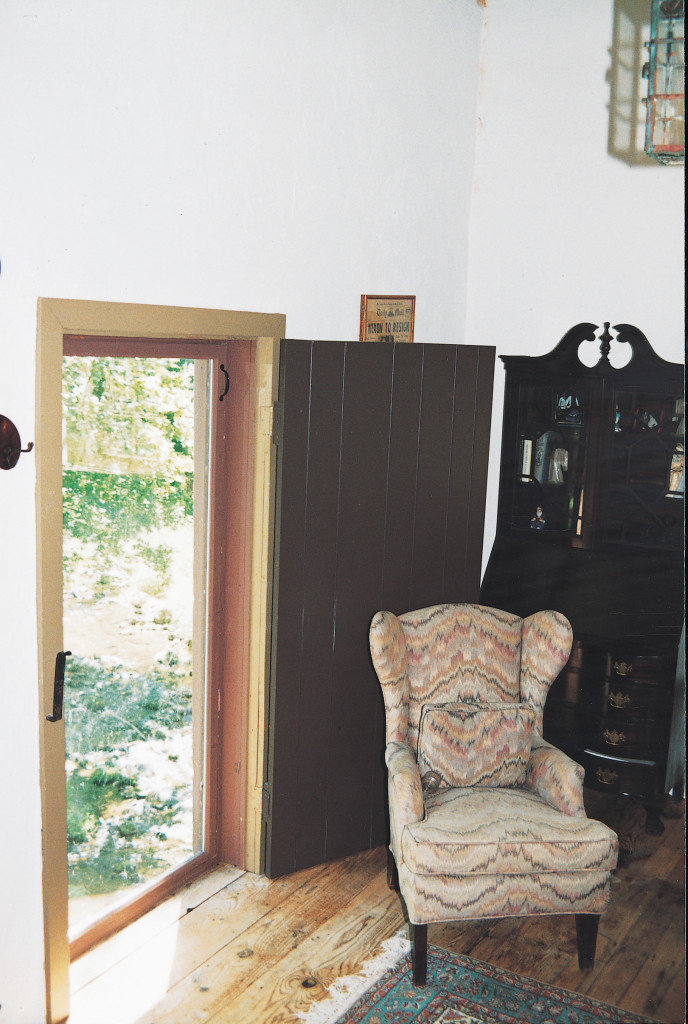 An former loading door has been converted into a window that overlooks the millrace. Photo by Natalie Brown.

The mill prospered under Samuel Pry’s ownership, but this prosperity was interrupted during the Civil War when Pry Mill was chosen as one of seven Union hospital sites before the Battle of Antietam. It was a bloody place after the battle as the wounded and dying soldiers were treated. A wagon full of wounded from the Sunken Road was accidentally dumped into the creek on their way to the mill, and some of the young doctors were later censured for drinking the distilled spirits instead of dispensing them to the wounded. Local legend claims that the Pry women baked bread for the wounded soldiers. 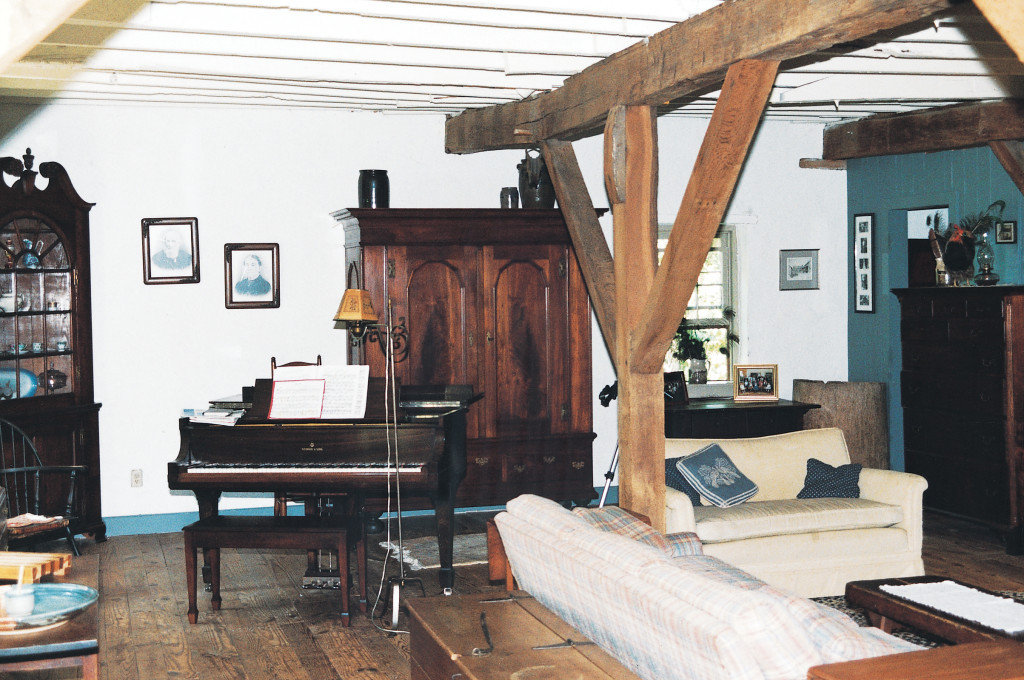 Pry was able to resume his business after the war. The 1880 Manufacturing Census describes the mill as having four runs of stones with a daily capacity of 300 bushels. The two, five-foot overshot wheels were powered by the fall from a 22 foot stone dam upstream, which turned the wheels at eight revolutions per minute and produced 24 horsepower. In terms of production, Pry mill was among the top five in the county in the 1880s. Samuel Pry died in 1901. Milling declined during the 20th century, and in 1926 Pry Mill ceased to operate as a gristmill. The millpond continued to be a favorite spot for picnics and swimming until 1956, when the dam was destroyed by a milk truck that had been swept off the bridge upstream during a flood.

When the mill was purchased by Frederick Banfield Hanson in 1970, it had deteriorated to the verge of collapse. The roof had to be reframed and was then covered with wooden shakes. Several of the massive posts and beams had to be rebuilt. All the windows and doors were replaced, and the exterior of the building was stripped of vegetation and repointed. The floors, each about 1,800 square feet, were recovered with pine flooring salvaged from an old warehouse. Hanson restored the second and third levels of the mill for an antique shop that he ran. In the rear corner of the third level, Hanson created a room around the new stairs by using the façade of an old home, two six-over-six windows, a paneled door with its ornamented architrave, and clapboard walls. In 1979, the mill and several other buildings in the community were listed in the National Register of Historic Places. Hanson died in 1987 before he could complete his plans for a residence on the fourth and fifth levels. 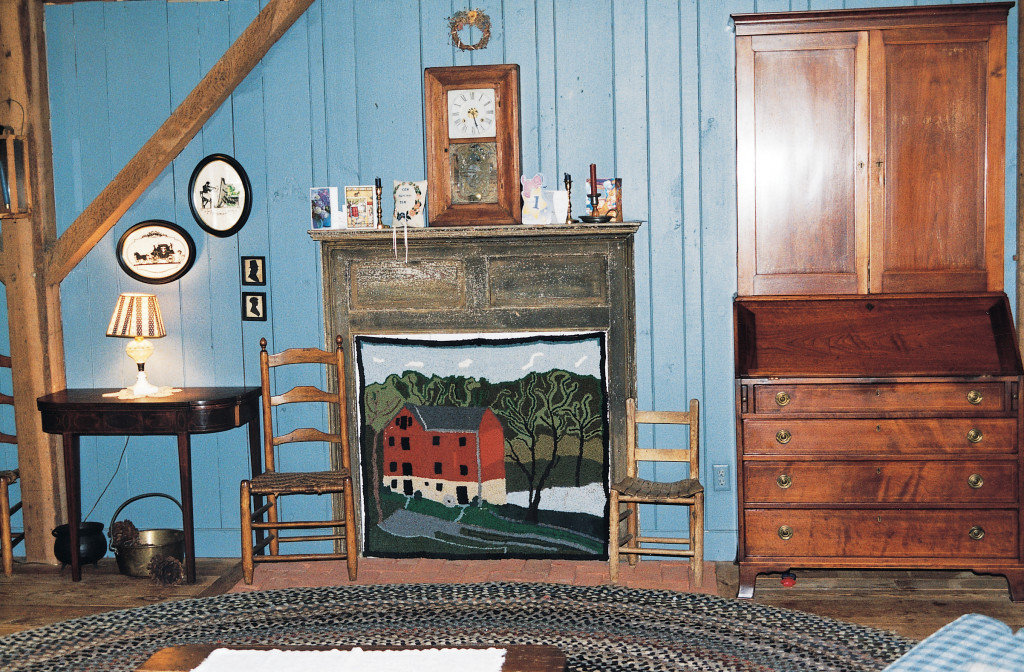 To settle Hanson’s estate, the mill property was sold at public auction in July 1987, to Todd Lakin Hershey. He pressed on with the restoration, converting the fourth level into living, dining and kitchen space with a master bedroom and bath. In 1989, the mill was on the Maryland House and Garden Pilgrimage, and Todd was teased about owning the perfect bachelor pad. Two years later, Todd married Catherine Hart, and both the wedding and the reception were held in the mill because they felt it was so much a part of their lives. The fourth floor became the honeymoon suite as the young couple worked together to create a home and their life together in the mill.

Todd and Katie went to auctions and antique stores to purchase furniture that would be both comfortable and functional. On the fourth level, an antique mantel is the focal point on the central wall, its opening covered with a primitive picture of the mill hooked in a small rug. No fireplace stands behind the mantel, but a broad brick hearth opens before it. In the dining room, a large antique table can seat twenty for dinner. The upper floor has been finished with sloped ceilings and exposed beams to provide comfortable bedrooms and play space for the children that have now blessed Todd and Katie. 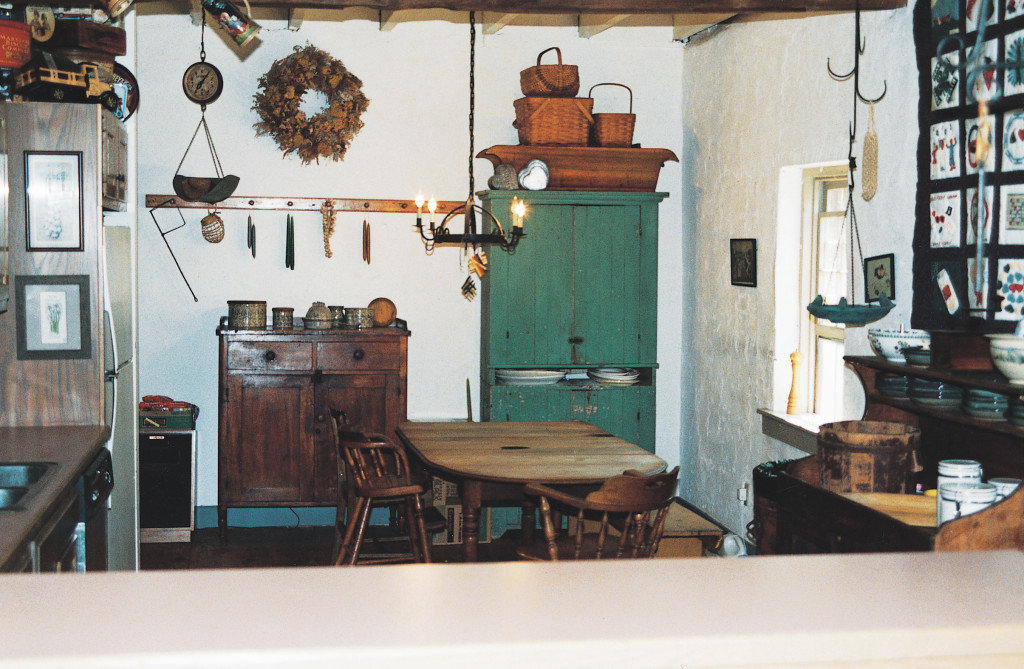 A few mementos of the operating mill remain. On one lower wall is a copy of the stencil that was applied to T. Pry’s flour sacks, and in one corner is one of the huge hoppers that once held grain as it was waiting to be milled. Outside, a millstone leans against the wall, and the path of the millrace forms a depression in the lawn. The first level of the mill, still looking much as it did when the milling machinery once operated there, fills with water when the creek floods. The dirt floor shifts, and new silt is added, but the water never rises to the next level. The size of the support timbers, the massive stone walls, and the undulating floor are impressive.

The second level, once Hanson’s antique show room, is an open space that can be used as a vast entertaining area. The furnace and other mechanicals are in a room on this floor. It was here and outside on the lawn that the Hershey wedding reception was held. The third level has more open space and the façade of an old home that encloses the stairs to the living area. 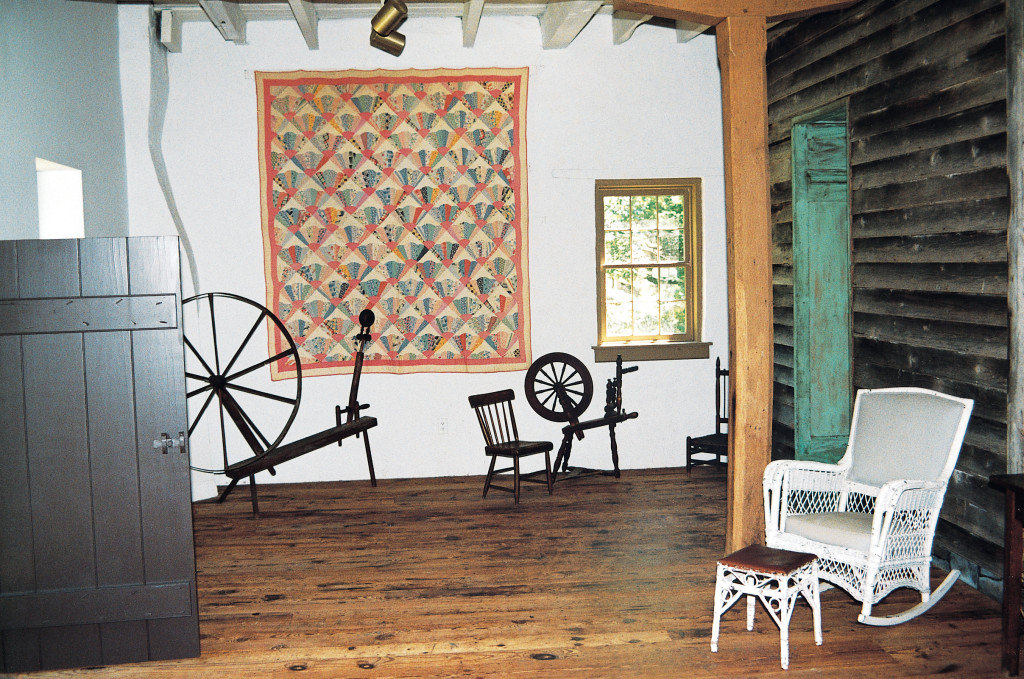 The mill provides a vast, open space for living, with windows that open to a spectacular view of the tops of the old trees surrounding the mill. It is a different way to live. Going outside requires a trip down several flights of stairs. Groceries have to be taken up those same stairs. An elaborate system of pumps carries wastewater from the mill to a leach field on higher ground; the well is up the hill, near the tenant house. Todd and Katie have labored with love to convert this old industrial building into a beautiful, comfortable and functional home for their family. It is a special place for a special family.

Epilogue: Little has changed over the years. The mill is still a wonderful home for Todd, Katie and their six children.

This article appeared in the Herald-Mail Sunday, January 4, 1998 as the 99th in the series.