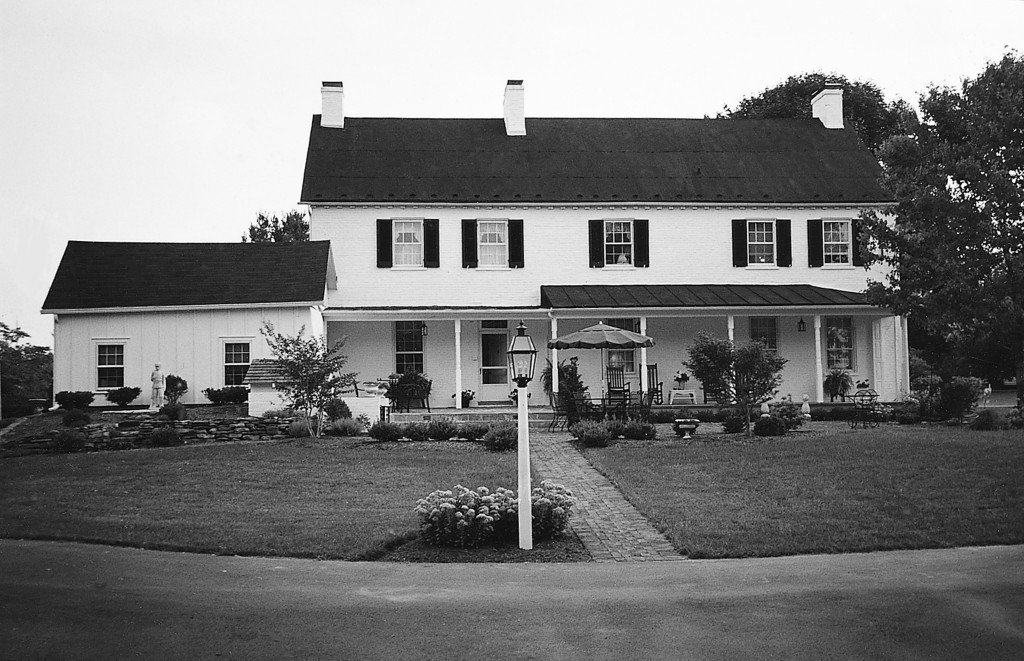 Paradise Church Road heads north from Longmeadow among an assortment of fields and new homes. To the east, Paradise Manor Drive leads into a subdivision with established yards and a settled, substantial look. Among these homes stands an elegant, white-painted brick residence in such remarkably good repair that its age is not immediately apparent. Its yard is immaculate, of about the same size as its neighbors and filled with trees and shrubs of middle years much like the surrounding yards. This is Paradise Manor, the original home on the 207 acre farm that became the subdivision. 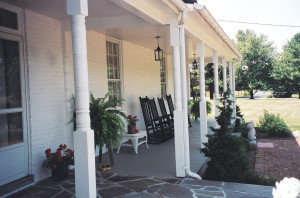 During the 18th century when Washington County was first being settled, land speculators would accumulate tracts of wilderness and hold the land hoping for appreciation in value. Thomas Cresap was granted the 550 acre tract he named Long Meadow by Charles Calvert, the fifth Lord Baltimore, in 1739. In 1746 this tract was sold to Daniel Dulaney who increased its size to 2,131 acres. He held the parcel until 1763 when it was purchased by Colonel Henry Bouquet who was known for his role in the French and Indian War in western Pennsylvania. Bouquet died of yellow fever while on duty in Florida two years later, and this tract changed hands twice in the next ten years. Then a 1,300 acre section was sold to Samuel Hughes of the Hughes Iron Works family in about 1780. Hughes sold this to Thomas Hart in 1789 and about two years later, 207 acres were sold to Dr. Richard Pindell, the first physician in Washington County. Dr. Pindell married Eliza Hart, the daughter of Thomas Hart and sister of Henry Clay’s wife Lucretia. It was probably Dr. Pindell who built Paradise Manor and lived there until 1812 when the farm was sold, and Dr. Pindell moved to Kentucky to become Henry Clay’s physician. 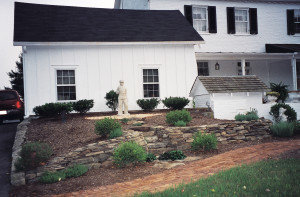 Samuel Brand owned the farm for six years, then sold it to Daniel Middlekauff whose son sold it to Adam Baer in 1869. It was not sold again until 1928 when Samuel Diller acquired it. In 1947 Irvin S. Martin purchased the farm and in 1964 sold it to the Paradise Homes Corporation, which subdivided the land into lots, and the house was slated to be demolished to make room for the new homes. Instead, Amos C. and Hazel E. Baer purchased the home his grandfather had owned and began a five-year restoration effort. The lower portion of the recessed double porch had been enclosed. A door had been made from a window in the back of the living room in order to make the main entrance of the house to the north, the side closest to the barn. Both these changes were reversed: the porch was opened and the main entrance was returned to the south side of the house, which faces Paradise Manor Drive. While removing the wallpaper in one of the downstairs rooms, Amos Baer discovered the date February 1783 under it. Is this when the house was built, or does it have some other meaning? If this were the date when the house was built, it would have been during the Hughes ownership, not Dr. Pindell’s. 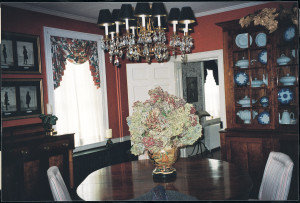 Paradise Manor is five bays wide and two stories high with Flemish bond brickwork on the south façade and common bond on the others. The bricks were made of clay excavated from the cellar and were fired on the property. This home is unusual because it was constructed all at one time. Often families in this area built a central core and added wings as need required and finances allowed.

Four rooms fill each floor with the walls of the upper rooms standing above those of the lower so that the weight of the building is carried without sag. Three interior chimneys served the eight fireplaces that were in each room. All but two of these still exist today. The large cooking fireplace in the kitchen and the one immediately above it were removed so that only the vestigial chimney above the roofline remains. This room above the kitchen must have been intended as servants’ quarters, for it was accessed by steep, narrow stairs in one corner of the kitchen and had no entry to the rest of the second floor. These stairs were removed to allow room for a half-bath, and a door was opened into the hall on the second story. In the kitchen a hand-hewn beam taken from the barn has been used in a brick wall at the end of the room. Counters are finished in terra cotta tile and the whole feeling is remarkably fresh and functional. 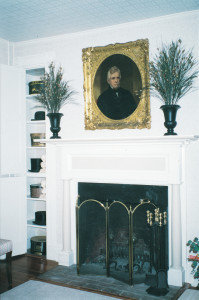 The front door has a large iron box lock with a brass knob and opens into the front hall. Above the door is a transom with diamond panes. The stairway to the second floor is accented by an elegant curved rail and simple balustrade. The original basement entrance, now closed, was under this staircase. The fireplaces have their original mantels and side closets. The windows on the ground floor have nine-over-six panes, with the upper story windows six-over-six. Many have their original glass.

Outside of the kitchen, and set back, is a small building with a loft. Once the summer kitchen, it is now a guest cottage. The cooking fireplace is gone, but on the narrow porch is a large, shallow sink with a hand pump. In the ground behind this building is a small stone root cellar with an arched roof covered with sod.

Amos Baer’s son William purchased Paradise Manor in 1978. He remembers the effort his parents expended to reclaim their family home, and he and his wife Nancy continue to care for it with a special sense of mission. 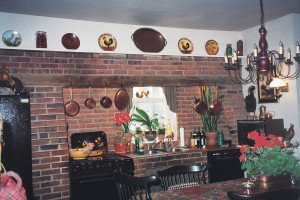 Epilogue: The rear porch has been rebuilt and a large brick patio has been added.

This article appeared in the Herald-Mail Sunday, July 1, 1990 as the 15th in the series.