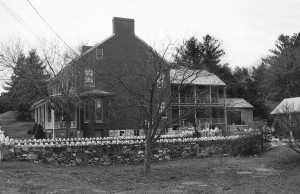 Built in 1823 by John Miller along the busy National Pike, today Miller’s Tavern is being carefully restored by another family of Millers to be a bed and breakfast and gift shop. Photo by Kevin Finnin. 2002

In the first quarter of the 19th century, the westward movement was changing the face and the character of the country. Roads were built to carry pioneers west to new lands and their products east to markets. One of the major trails of this migration was from Baltimore to Wheeling, West Virginia, through western Maryland, now known as the Old National Pike. This road gave birth to many towns that provided services for travelers along its length. Transportation was slow in the early 19th century, for wagons usually traveled less than twenty miles a day. Taverns appeared frequently along the roads to feed the travelers and accommodate the many overnight stops that they made. 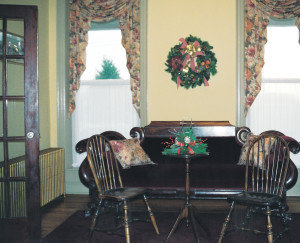 In 1819, Wilson Bridge was built across Conococheague Creek, and the traffic surged west. The National Road had been authorized by Congress in 1806 to be built from Cumberland, Maryland, to Wheeling, West Virginia. In order to connect this federal road with Baltimore and other settlements in Maryland, the State of Maryland authorized turnpikes to be built by private companies. When not enough turnpike companies were created to finish roads quickly, the state legislature required that banks, in order to be chartered, create and finance turnpike companies. The section from the Conococheague to Cumberland, a distance of 60 miles, was one of many such bank roads. 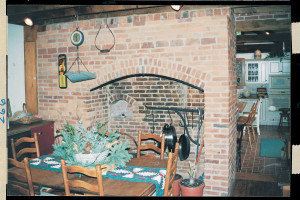 In 1823, a few miles west of the Wilson Bridge, John Miller built a handsome red brick building for his tavern. Rising from a stone foundation, the front façade of the house is laid in Flemish bond, and the rest of the walls in common bond. The front block of the house has five bays with two front entrances, each transom holds diamond shaped panes. The central door enters a hall that bisects the main house. There are two rooms on either side of this hall, with the ones on the right being slightly larger than the ones on the left because the hall is a bit off center. The doors leading from the hall to the forward rooms have both been widened and turned into French doors, but the original paneled jambs and side moldings have been retained. 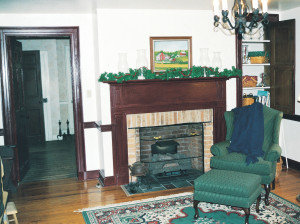 The room on the right side of the hall can be entered from the other front door as well as the hall; it was once the barroom. Impressions of the bar itself remain in the ceiling of this room. Originally, the first story windows had nine-over-six sashes, but these were removed and replaced with modern single pane sashes. The barroom has no fireplace but expands with a bay on the east wall. Curved arches top the three windows in the bay, while the other windows in the house have flat arches. The other three rooms on the first floor have fireplaces with flaring mantel boards, deep molding and small closets built in beside them. On each closet are two doors with beveled-back, low profile, raised panels.

Stairs to the second floor ascend with a gentle rise on the right side of the central hall. Shallow scroll-cut stair brackets and a simple balustrade and handrail finish the staircase. The second story is laid with the same floor plan as the first, with fireplaces vented by interior chimneys on the outer wall in each room. The stairs continue to the unfinished attic. The metal roof is laid over original shake shingles on the back slope. At either side of the attic, the fireplace flues slant across the gable ends to join into single chimneys at gable peak. 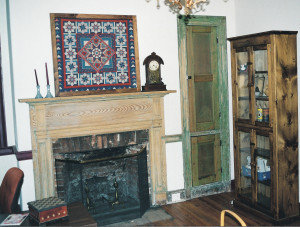 A two-story, five-bay wing with a double porch on the east side is attached behind the main block of the house. The lower level of this porch can be entered from a door at the far end of the central hall opposite the front door, and the upper level can be reached from a door on the landing of the stairs. The windows in the ell have six-over-six sashes with original glass in them. The four rooms in the wing have doors leading onto the porches. At the end of the wing is a one-story clapboard addition. Three of the nine-over-six windows that were removed from the front block of the house have been reused here. This addition has two doors, one to the smokehouse section and the other to the summer kitchen. The basement is divided into several sections and is entered through two bulkheads and a door under the bay and partially below grade.

Life along the National Pike was busy. T.  J. C. Williams reports in his History and Biographical Record of Washington County, Maryland that, The farmers were enabled to do this hauling as cheaply as they did by the saving of tavern bills. The wagoners not only took with them enough food for themselves and their teams to last until their return, but also carried their bedding with them. This they spread upon the floor of the barroom and the only profit the landlord of the tavern could get from such economical guests was in the whiskey and hot coffee they bought. With whiskey selling at a “flip” or a “levy” a pint, the profit from that source could not have been very great, unless the amount consumed was enormous. This was probably the case, for the amount of whiskey drinking in those days, when adulteration was unknown, was indeed incredible… In The Old Pike, Thomas Searight reports, …Three miles westward his house, adapted to dancing purposes, and young men and maidens of the vicinity frequently tripped to the notes of the old time music in its spacious halls. The waltz was unknown, and the figures varied from the “hoe down” to the cotillion, closing always with the “Virginia Reel.” The old wagoners were invariably invited to participate in these festivities and engaged in them with a gusto not excelled by the lads and lasses on the surrounding neighborhood. 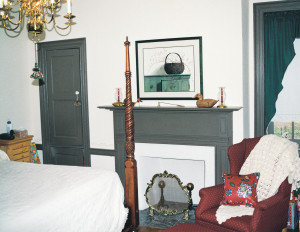 The Miller Tavern property was the subject of an equity case in 1858, but records of this were lost in a courthouse fire. A second equity case in 1897 shows the Miller heirs trying to straighten out the ownership of the farm after Melchor Miller died without wife, children or a will. To settle the estate, the property was auctioned in November, 1897; and was described in the newspaper notice as Being a tract of the best quality of limestone land in the highest state of cultivation, situated along the north side of the National turnpike seven and a half miles west of Hagerstown and three and a half miles east of Clear Spring, at Spickler’s postoffice …The improvements consist of one of the best two-story BRICK DWELLINGS IN THAT SECTION, good bank barn, spring house, wagon shed, buggy shed, hog pen, and all other outbuildings. There is a never failing well of water and a cistern at the kitchen door. There is an elegant apple orchard on the farm. 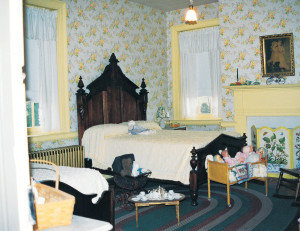 It is apparent that the property had ceased to function as a tavern well before this sale. The farm was purchased by Martha S. Grove, probably one the Miller heirs, and after her death was purchased by Victor G. and Zora L. Funkhouser, who sold it to William and Viola Bloyer in 1933. Just recently the farm was sold to another Miller family. David Miller and his wife Elizabeth want to restore the building and hope to turn it into a bed and breakfast. Miller’s Tavern will open again.

Epilogue: The Millers learned soon after starting work on the house that interior walls were also brick. New electrical service has been run by excavating channels in the bricks to carry the wires then plastering over them. Behind a paneled wall in the kitchen they discovered a large, brick cooking fireplace with a lovely arched lintel five feet off the floor. David searched out the person who had purchased the crane at the estate sale and bought it back. Because of this inviting fireplace, they decided to use this space as a dining room and move the kitchen to the single-story frame wing at the end of the house. When they began restoration, the Millers discovered that termites had done too much damage to repair. The wing was leveled and a new structure of similar size and footprint was erected. Hand-hewn beams from the wagon shed were used in the roof support system and are exposed in the kitchen. Counters circle the room around a wood-topped central island.

Much of the house has been restored and the floors refinished. David, Elizabeth and friends stripped wallpaper, patched, painted and stenciled trims in the three front rooms that then served as offices while Elizabeth ran an insurance company. These rooms have now been converted to living space. The front hall took a year to restore, but the results are lovely. The double porches on the rear wing have been rebuilt, and the second floor porch can be accessed from a door on the landing of the main staircase as well as from the two upper chambers of the wing. Eventually these rooms will become the master bedroom suite. The old carriage house has been removed and will be rebuilt as garage space and a workshop. The Millers hope that they can rebuild the original double porches that were once on the front of the house.

This article appeared in the Herald-Mail Sunday, January 3, 1992 as the 42nd in the series.