Barnes Road is part of an old route that runs generally north and south between Lappans and Wagaman roads, changing its name as it moves north, first to Roxbury then Garis Shop Road. Houses along this rural way are widespread among woodlots and farmsteads.

Beaver Creek circles through an 18th-century farmstead in a small hollow and then dips under the road beneath a lovely 1906 bridge. The farmstead spans the road. 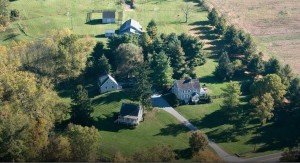 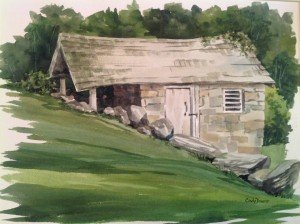 A small stone springhouse stands on the west, tucked into the earth not far from the edge of the stream. On the east, past low stone walls, stand two stone houses and a collection of fences and outbuildings.

The larger of the two houses has three bays with an entry door, sheltered by a small gable-roofed porch, in the south bay. The first-floor windows have nine-over-six sashes, with wide frames secured by wooden pins. The upper windows have the same wide frames with six-over-six sashes. All the sashes have wide muntins. These windows and the gentle stone arches above them indicate an early building date.

Between the upper windows are two panels set in arched recesses that once must have proclaimed the date and the initials of the builder, but these inscriptions were long ago obliterated. 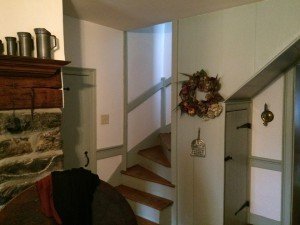 John Ridout of Annapolis patented Jerrico Hills Resurveyed in 1776. According to the National Register nomination for the house, on Feb. 26, 1791, Michael Taylor purchased 256.5 acres of land, part of Jerrico Hills Resurveyed, for 641 pounds. He probably built the house shortly after. Jacob Keedy purchased about one-fourth of this parcel in 1842 and sold it 21 years later as part of an expanded tract. 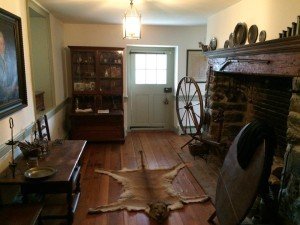 The house has three rooms arranged around the central chimney in the simple German flurkuchenhaus floor plan. The main entry door opens into what was once the original kitchen, a narrow room dominated by a huge stone fireplace with a firebox about 7 feet wide and more than 3 feet tall. An arched recess is built low in the brick back of the fireplace. Winder stairs, enclosed with hand-planed, beaded boards, lead to the second floor. To the left of the fireplace, a door opens into the other half of the house. The dining room fills the front half of this space, with the modern kitchen in the area to its east. Ceilings throughout the house are a bit taller than 8 feet, giving the space a welcoming, ample feel. 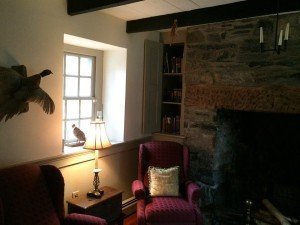 At some point early on, another stone room, about 12 feet square, was added at the back of this house at the end of the original kitchen. Apparently the builder needed more room and felt that a smaller kitchen would allow the larger room to be used as a living area. Although not as large as the first, this smaller kitchen has another large fireplace with another hand-hewn lintel spanning its firebox. It is now used as a den. Doors with stone sills open on both its north and south walls. The space between this room and the end of the modern kitchen became a porch with a roof and flagstone floor.

Upstairs, a wide hall accesses two bedrooms, a small one at the head of the stairs and the larger one to the north. A small firebox is set in the corner of the larger room’s south wall. The small room at the end of the hall has been converted into a modern bath. At the other end of the hall, above the stairs, is another set of steep winder steps leading to the attic. This space has been finished, but the original collar beams are quite low and make the space better used as storage. 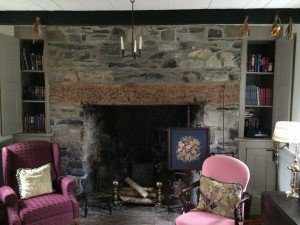 The smaller stone house, a tenant cottage, grows from the gentle slope leading to Beaver Creek. Originally a single room with a loft above, The main door, on the east, has four window panes in the top, with a sliding wooden panel that can be pulled up to cover this glass in case of danger. Another door opens on the west wall opposite the first. 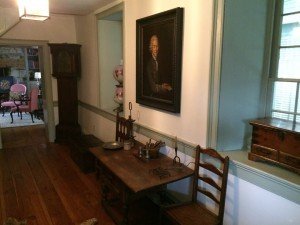 In 1972, George Maharay and his wife, Janet, came from Washington, D.C., to look for a weekend place; they happened on the house on Barnes Road. Then run down, it became the source of many projects over the years. The Maharays removed the garage and built a two-story structure with an office above in its place. They rebuilt the cottage, which had suffered a fire, with a wide brick swath running between the two doors in front of the fireplace. The living area then got new wood flooring, and a small kitchen was built in the southwest corner. Upstairs, the loft became a large bedroom with a closet and a bath on the south wall. 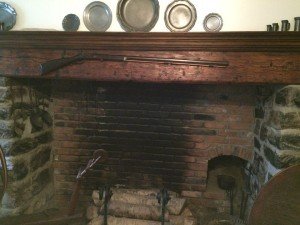 Both houses were repointed and reroofed. The main house’s front porch was removed and rebuilt. The back porch was closed in, the flag stones moved outside to form a path to the parking area and a new floor laid. In the second kitchen, which had been used for chickens, the Maharays replaced the floor, removed the wainscot and repaired or replaced window sashes, plaster and woodwork to create the den. After removing boards at the cornice level of the house’s exterior, George noticed that the joist tails were curved. This touch is typical of early homes in Pennsylvania but seldom seen south of Chester County. He replicated a curved board to restore this element. A yellow pine corner cupboard from a log house in Pennsylvania was built into the dining room. 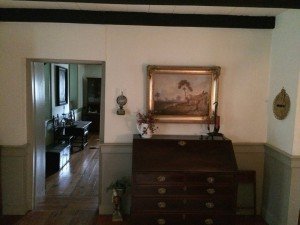 In his search for parts to repair his home, George Maharay found a piece of glass made by Baron von Stiegel, famed for his glasswork produced around the 1760s. This piece was placed in the dining room window nearest the hall. After retirement, the Mahararys moved to Barnes Road and lived there many years. Finally they retired to smaller quarters. Talie Brown purchased Keedy House and devoted herself to rebuilding the barn and fences to shelter her llamas and to defend the bridge from a proposed replacement. 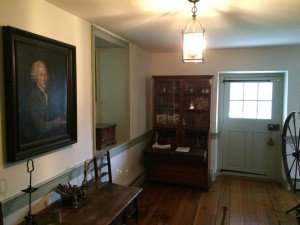 In January 2004, Kevin and Cindy Damewood came from Atlanta and purchased the property as a vacation home. They became so entranced with life on Barnes Road that Kevin Damewood left his job, and they moved into the house. For several months, they lived in the cottage, and they fell in love with the view of the bridge from its back porch. The serene picture with the bluff behind the bridge epitomizes all that is unique about life at Keedy House. 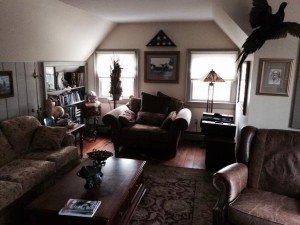 The Damewoods have moved to the main house. They have begun to make the place their own, first lining the den fireplace so that it can safely have fires. New paint colors are selected, and they are researching a new roof.

But the Damewoods say they are concerned about the future of the nearby bridge.

The Barnes Road bridge is scheduled to be replaced by the Washington County in 2007. Some engineers say it cannot be repaired to last. Others feel that repairs would last a quarter century. Maryland Historical Trust officials are concerned that replacing the bridge would severely impact the Keedy House, a National Register property. Representatives of the Trust have asked the county to consider ways to preserve the bridge. The bridge is the oldest unaltered concrete arch bridge in the state, eligible for the National Register of Historic Places and perhaps the only example of its subtype ever constructed in the state. 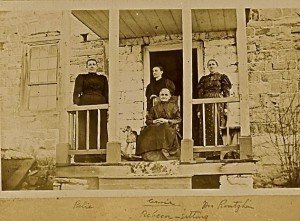