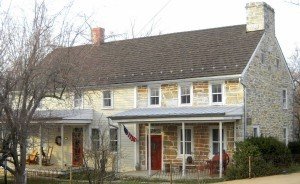 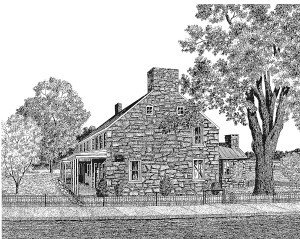 The house rests slightly below street level, on land sloping down to a sharp bend in Little Antietam Creek. Mature trees that shelter the house and the sloping terrain create a secluded and private space in the heart of the village. Large, flat stones pave paths around the house, and a stone wash house sits behind the house, near the cistern. A large fireplace with two cranes still awaiting kettles dominates the south wall of this small building, and steep stairs with winder steps lead to the loft above. The dam that once held back the stream for Hess’s mill still stands and is part of this property. One of the stone walls that once carried the millrace retains the yard near the stream. 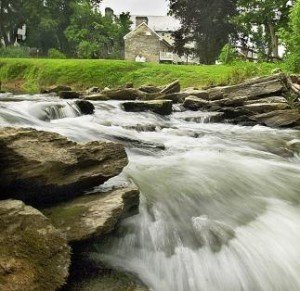 Jacob Hess was born in 1740, and was brought from Lancaster County, Pennsylvania, to superintend the construction of a mill on Antietam Creek for Christian Orndorff. He married Margaret Orndorff, Christian’s eldest daughter, about 1768. His father-in-law gave him property near the spot where an early road crossed Little Antietam Creek. Aaron Orndorff (1784-1845) has been quoted by his son Darius as saying, …After Jacob Hess completed his mills for Herr Orendorff on the Big Antietam, he took Peggy to wife and with her fled to the Little Antietam where he built a large dwelling, Swiss barn and a flour mill. The barn and the mill are gone, but the house remains, the oldest in Keedysville. 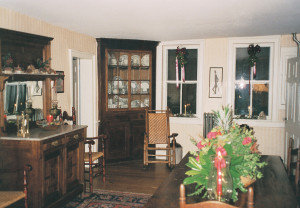 The large log wing with its irregularly placed openings was the first section of the house that Hess built. This building may have followed the early German floor plan, with a center chimney surrounded by three rooms, for there are stone piers in the cellar that might be the remains of supports for the massive stonework of a multi-flued chimney. This stonework has been partially removed, and the stairway in the center hall now rises above it. 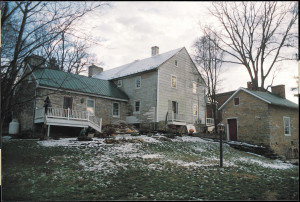 The cellar is entered both from steps under the stairs in the center hall and from a flight of stone steps leading from the exterior of the house on the west side. One window still has the original wooden grille, a door frame still carries a pair of wooden pintles attached with rose-head nails, and several cubbies are built into the wall to hold candles or lanterns. 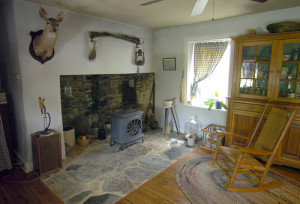 A central hall now bisects each floor of this wing of the house, and the stairway to the second floor is in this hall. The west side of the central hall has been divided into two rooms. The south room remains intact with a fireplace on the dividing wall next to the hall. The mantel has pyramidal panels and is a replacement from a later period. The original chair rail still circles the room. The small room to the north has been divided into a kitchenette and bathrooms.

A narrow dining room, the depth of the log section, joins the hall to the east. Built into a corner of this room is a large cupboard with eight-pane glass doors in its upper section that may have been built around 1820. Woodwork is original. Most windows have replacement two-over-two sashes.

The stairway in the center hall of the log wing rises to a landing and then divides. Three steps lead to the rooms to the west, and a second rank of three steps enters the center hall on the upper level. Three bedrooms, a nursery, bath and a hall to the stone wing fill the second floor. Ceilings are low, about seven feet, and the rooms still have most of the original woodwork around the doors and windows, as well as original batten doors and hand-forged hardware. A large summer beam, cased with boards, supports the weight of the attic floor across the log section. This beam accentuates the low ceilings on the second floor. 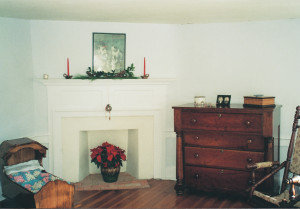 A corner fireplace in the Jacob Hess House. Photo by Merry Stinson.

The three-bay, two-story stone wing to the east was added to the log house along the eastern dining room wall. An enclosed staircase is entered through a door at the north end of the dining room and it leads to the second floor in the stone wing. Two other doors in the dining room open into the two lower rooms of the stone section. This wing has two rooms on each level, with the south rooms being slightly larger than those on the north. All four rooms have corner fireplaces served by the great stone chimney that rises from the gable. Corner fireplaces are rare features and are almost always identified as having been built in the 18th century. The mantels of these fireplaces are simple. Original woodwork and chair rail trim the room. On the second floor, the north bedroom has a built-in, painted corner cupboard opposite the fireplace. 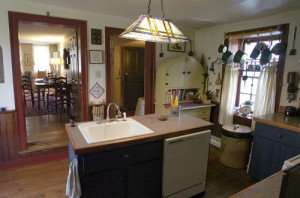 The main entrance to the stone wing opens through a batten door beneath a transom with fan tracery. The jambs of this door are paneled, and it opens into the larger of the two downstairs rooms. The window jambs are paneled, and chair rail trims the rooms. The attic above the two sections is continuous, indicating the roof was redone when the stone wing was added. Pairs of rafters are pegged together at the ridge, and the floor is covered with wide pine boards. 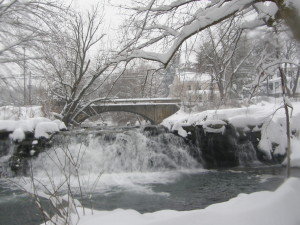 The Little Antietam Creek as it flows alongside the Jacob Hess House.

A one-story, stone summer kitchen with a large cooking fireplace stood a few feet to the north of the log wing. This structure has been connected to the log addition. It now serves as a family room, while the closed space between the log house and the summer kitchen has become a small modern kitchen. Doors lead from the hallway, the dining room, the family room and from Main Street through the new exterior door into this small space.

Kenny and Diane Putman purchased the Hess House in August 2000. They are settling in, making plans, and establishing priorities for restoring their home. They love owning a piece of history and having a quiet place curled in a bend of Little Antietam Creek, near a twelve-foot dam and a millrace wall.

Epilogue: Since purchasing the house, the Putmans have begun restoration work on the exterior, repairing and painting wooden members of the house. They took up the floor of the summer kitchen because it was quite loose and found that the joists were laid on an earlier flagstone floor and not tied into the walls at all. They found the original stone hearth and brick firebox of the fireplace and are restoring all these elements.

Epilouge 2015: The Putmans had been excellent stewards of this great historic home. Today they feel perhaps they have another calling and have put the home on the market.

This article appeared in the Herald-Mail Sunday, December 3, 2000 as the 134th in the series.