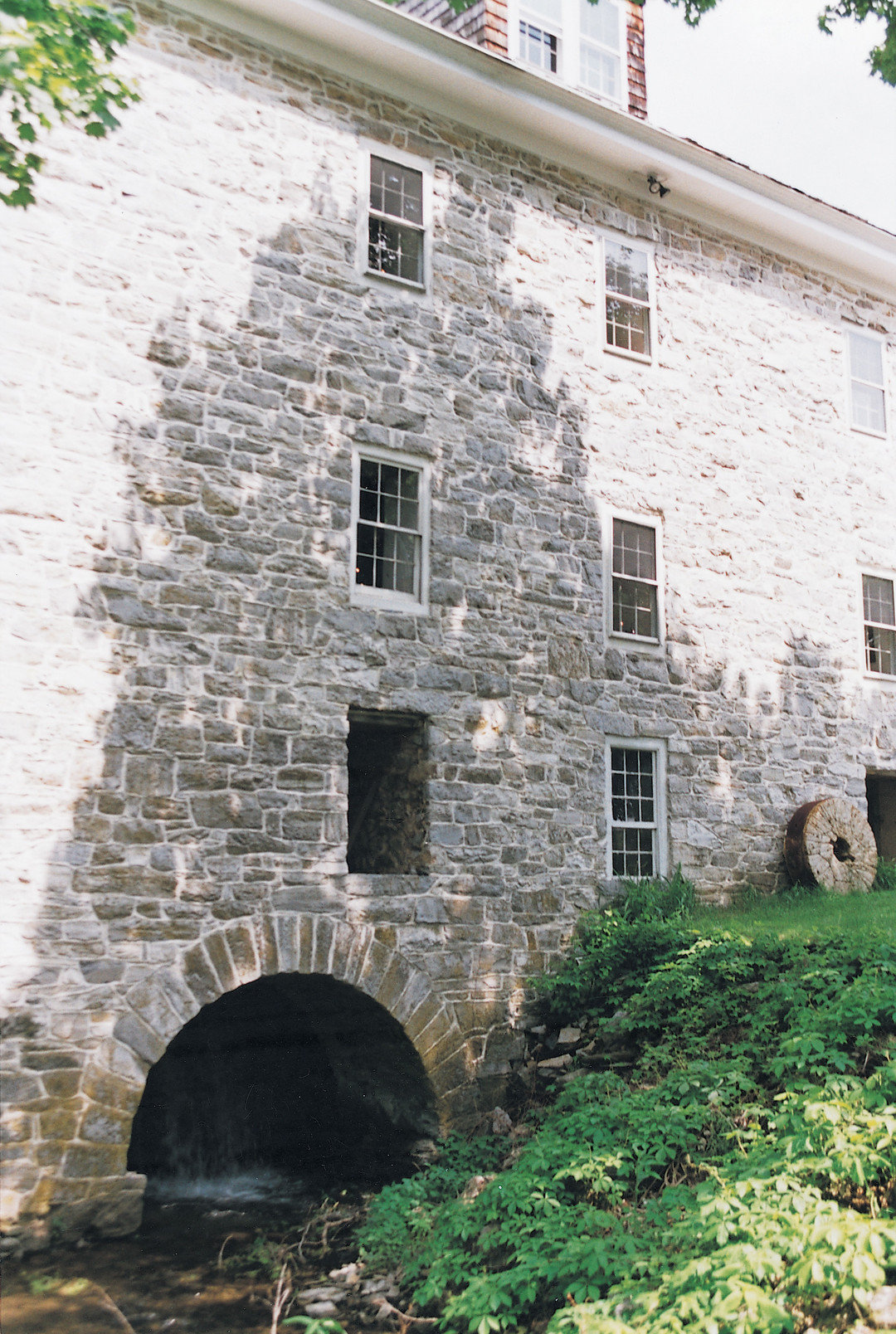 The millrace enters the mill at the rear of the building.

Traveling east, Beaver Creek Road settles into a gentle valley. To the right stands a stone barn — the first minion of the delightful Doub’s Mill Historic District. This collection of stone and frame buildings is gathered about Beaver Creek as it flows in several narrow, intertwining channels and crosses beneath the road under a low, one-lane bridge. The old stone mill, two-and-one-half stories high, stands astride one of the branches of the creek and dominates the scene. Now the home of Mr. and Mrs. Luigi L. Perini, this magnificent structure has had a checkered existence.

Between 1811 and 1821 John Funk built this structure to replace a wooden gristmill that had collapsed from having been overfilled with grain. The mill is constructed of local limestone. It originally served to grind grain into flour by using waterpower, the major source of energy in the early 19th century. In 1820 the mill employed two men and ground 12,000 bushels of wheat, rye and corn into flower worth $76 per barrel. John Doub, Sr., acquired the mill in 1821, and the Doub family was to own the mill for 79 years. 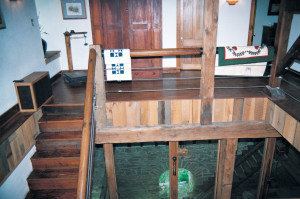 As the technology of milling changed in the 20th century, water-powered gristmills became unprofitable. The mill ceased to operate on a commercial basis in 1930, but it continued to be used to custom grind grain for neighbors and friends until 1945. During this period a store and post office operated in part of the first floor, and gas pumps were installed in front of the mill.

In 1948 Frank L. Doub sold the mill to Mr. and Mrs. Morgan, who used the building as an antique store and auction house. Twenty years later, John Shaffer bought the mill and planned to convert it to a political retreat. He replaced the original metal roof with cedar shakes, added two dormers on the front and four on the back, replaced the original nine-over-six windows with six-over-six sashes and removed the pointing. In 1976 the mill was sold again, but the new owner was unable to obtain the necessary permits to convert the building to a residence and sold it to Mr. and Mrs. Perini in 1979 after it had suffered a great deal of 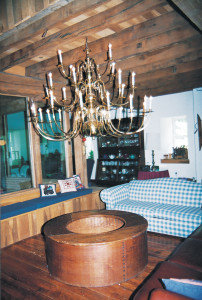 The owners of Doubs Mill incorporated a great many of the original working features of the mill into the living space.

vandalism. It was a narrow escape for the old mill, for it was about to be condemned. Because it is situated in a flood plain, sewage from the mill must be pumped 1,000 feet away into a corn field behind the building. Only the good offices of neighbors who granted easements and state officials who permitted this innovative solution to the problem, allowed the mill to be converted into the magnificent home it is today. 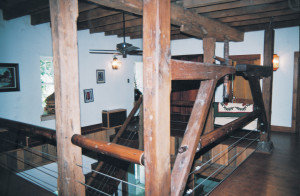 The interior of the mill is a wonderful example of adaptive reuse. Because money was in short supply, everything that was left in the mill was reused in some new way: the wooden millstone cover became a coffee table, the grain hopper was inverted and hung over the island in the kitchen, wooden poles used as part of the system to lift grain to upper levels became hand rails on the stairs and around the balcony. Grain chutes with their original beaded edges now separate the new interior windows that open up the living area to the rushing waters of the old millrace as it runs beneath the building. The original post and beam construction is exposed and the floors are still the original floorboards. The existing stairs were moved but not changed. This expanse of old wood gives a patina and richness to the interior that speaks of the old mill and the years that it served. 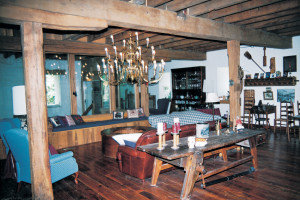 This elegant and comfortable home received the Maryland State Historic Society’s Calvert Prize for a historic preservation project in 1988. 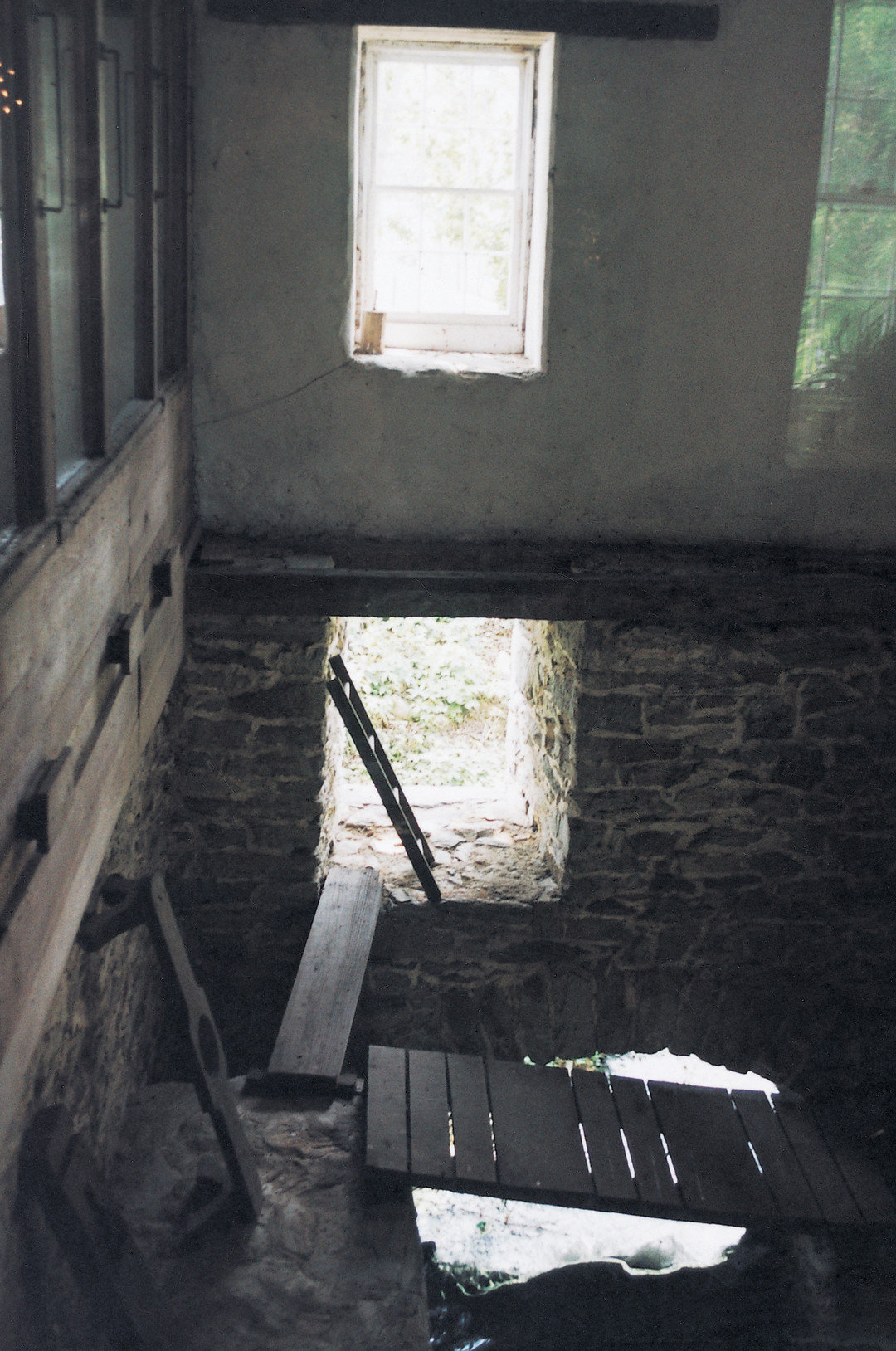 Interior glass windows allow the owners to look directly into the waters of the mill race from the living room.

Five other homes and numerous outbuildings, all originally part of the mill complex, are also part of the community. The stone structures are built in the German tradition, and one has a date stone inscribed 1782, at which time the area belonged to the brothers, Henry and Christian Newcomer, Mennonites of Swiss-German origin. Each is privately owned and contributes to the charm of the area. By working with these old buildings, these owners have saved this historic community, created beautiful and unique homes for themselves and have retained this part of our rural heritage. Even the beavers find the atmosphere inviting. They have returned to Beaver Creek.

Epilogue: The Cooperage, a small stone building at the rear of the mill, has been reclaimed and is now a shop for Mrs. Perini to sell her collection of early textiles. The small, stone tenant house across the road is being restored for use as a guest house. 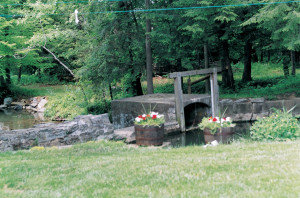 This article appeared in the Herald-Mail Sunday, May 5, 1989 as the 1st in the series.