The American Hotel, a favorite stop for travelers along the National Road. Photo courtesy of the Clear Spring District Historical Association.

The clear spring still flows at the foot of Fairview Mountain on the south side of what first was called the Bank Road. Now Route 40, it once was a dirt and gravel highway to the west that completed the connection between Baltimore and Cumberland by 1823. At Cumberland, it joined the National Pike, which went west from there. Having the spring close to the road made this an appealing place for coaches and wagons to stop and refresh both travelers and teams.

A sign directs the passerby to a double walkway between 109 and 111 Cumberland Street (the name the National Pike/Route 40 carries through Clear Spring). Back behind the houses, the spring emerges from beneath a stone bulwark and flows into a concrete basin. It then proceeds across back yards in an irregular path of man-made channels. Still as cool and appealing as it must have been a 150 years ago, the spring is now accompanied by a sign warning that it should not be tasted. 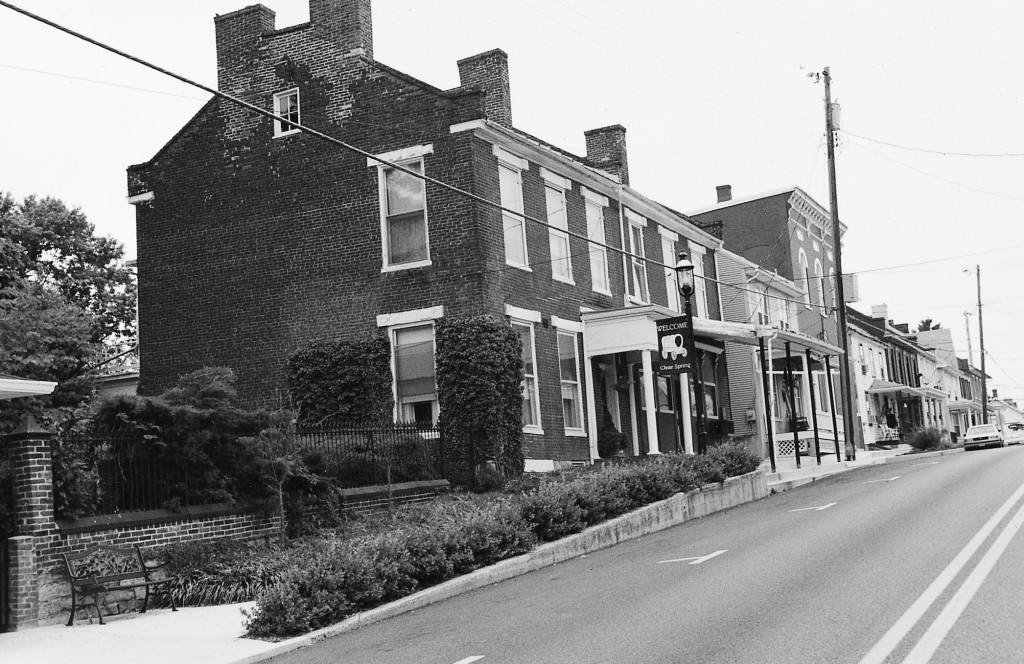 Jacob Mayer received a tract of land from Nathaniel Nesbitt, Sr., in 1790. At his death, his two daughters and son Martin inherited his estate. In 1821, Martin, whose last name was now Myers, divided his portion of his father’s land and began to sell lots. The town grew up along the Pike, narrow and long. Houses are often attached to one another, filling the lots from side to side and sitting next to the sidewalk. Many of them have narrow porches fitted with chairs from which to watch the passing scene. Most of the buildings lining Cumberland Street are two-and-a-half stories high, and many are log structures faced with either brick or clapboard. Often the masonry has been painted to prevent water from penetrating soft, old brick and causing deterioration. A few buildings have three stories with mansard roofs covered in decorative slate shingles. Deep back yards grace the closely set buildings, and in some places, cattle can be seen grazing beyond.

Family ties run long and deep in Clear Spring. Nathaniel Nesbitt, Sr., first purchased land here in 1754. His great-granddaughter and her husband built the house at the corner of Cumberland Street and Broadfording Road on part of that land, and it is still owned by his great great-granddaughter. Many descendants of the early settlers still live here. There are Prathers, Seiberts, Helsers, Hulls, Keefers and Cushwas still in the area. 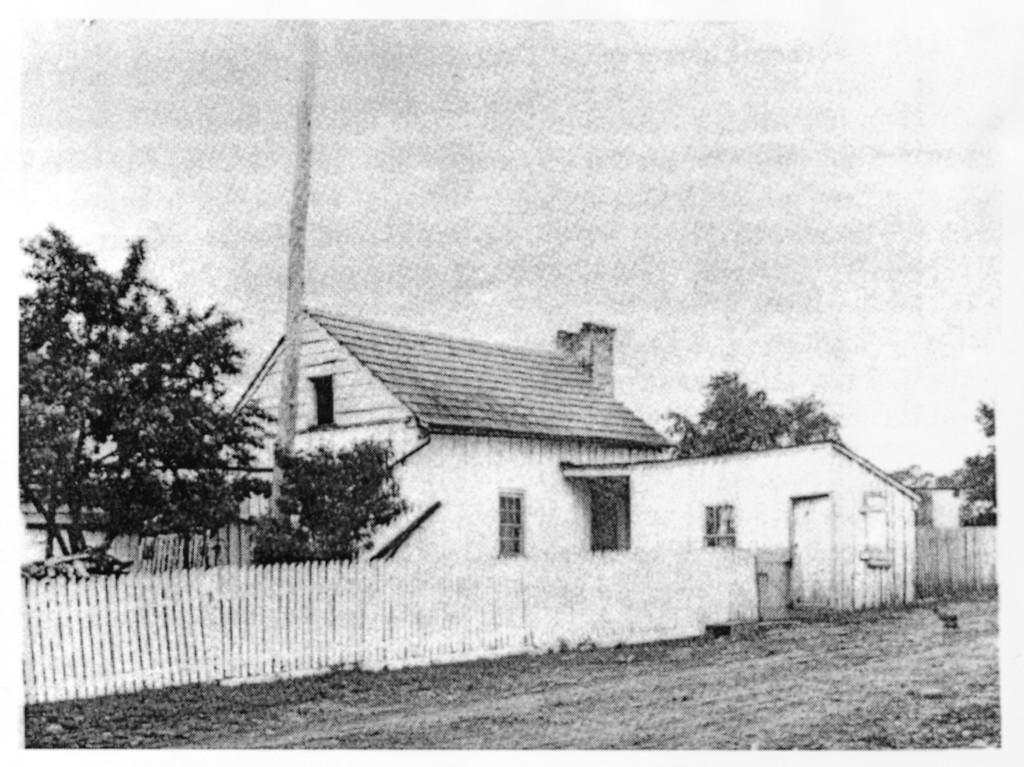 The tollgate house along Cumberland Street (National Road at the west end of Clear Spring. The long pole (pike) would come down across the road and no traveler could enter until a toll was paid. Photo courtesy The Clear Spring District Historical Association.

The Perry House, nineteen Cumberland Street, is a large Federal Revival brick. Built in 1850 by Dr. H. F. Perry, it served as home and office for him and for his son who was also a physician. The special treat of visiting Dr. Perry was to see his bulldog smoke cigars. The Clear Spring Mechanics’ Loan and Savings Bank was also housed in the building for a time during this period, and the elder Dr. Perry was a cashier there late in his life.

The imposing painted brick building at 101 Cumberland Street was once the Potomac Hotel, which served travelers of the Pike and was a favorite stop of Henry Clay on his trips between his home in Lexington, Kentucky, and his offices in Congress. Originally a simple one-story porch crossed half of the front façade. This was replaced around the time of the Civil War by a two-tiered porch with columns and flat, scroll-cut balustrades on both the first and second stories. The building now has four two-story columns supporting a central portico and is a private residence. East of the Potomac Hotel is a small log and weatherboard structure no longer in use. Acknowledged as the first post office and believed to have been built by Martin Myers, it was rented to the first postmaster in 1823. Later it was the first telegraph office in the area, and then the Band Building during the era of the Clear Spring Band. It became a warehouse for the adjoining store and is now part of an estate awaiting its next reuse. 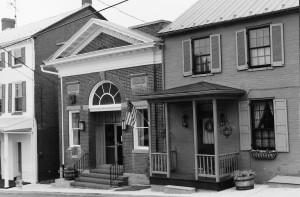 Built in 1889 for the International Order of the Odd Fellows, this Greek Revival Building stands along Cumberland Street in downtown Clear Spring.

The buildings along Cumberland Street have served many purposes. During the heyday of the Pike, from the 1820s to the 1860s, many hotels and stores filled the needs of travelers. Blacksmiths, wheelwrights, saddlers, wagon makers, barbers, butchers and store keepers all set up businesses along Cumberland Street. As the era of the Pike waned with the coming of the C&O Canal and the railroads, the buildings were often turned into residences. Today a few commercial enterprises are interspersed with homes. The street is busy with traffic traveling through, but there is an air of quiet and serenity in this small town. 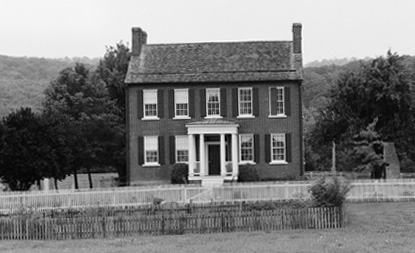 Blessed with an active historical association, Clear Spring has a remarkable fund of written memories and photographs of earlier times. The days of old are preserved at Plumb Grove Mansion, now owned by the Clear Spring District Historical Association (CSDHA). Plumb Grove was built by Nathaniel Nesbitt’s grandson Jonathan Nesbitt II, with slave labor. It has marbleized baseboards, hand-grained doors and elaborate carving—all highly sophisticated details for such an early home. The mansion had never been altered from its original state during its long history. Still without plumbing, Plumb Grove had minimal electric service added after the historical association acquired the property, and now has been restored with volunteer effort. When you travel west, take time to enjoy Clear Spring. If you stroll the street on a summer’s evening you may be treated to a carillon concert from St. Peter’s Church, a lovely reflection of the quiet and joy that emanates from this small community.

Epilogue: After months of agonizing negotiation, CSDHA gained title to the old post office, which by then had nearly collapsed. Within months the building had been restored as the headquarters of the association. CSDHA has recently been given the log house on Mill Street by member Carlene Staley and will soon begin to make this a space for meetings, lectures and exhibits.

This article appeared in the Herald Mail Newspaper,  Sunday, October 1, 1989, the 6th in a series of articles by Patricia Schooley about the historical and architectural treasures of Washington County.