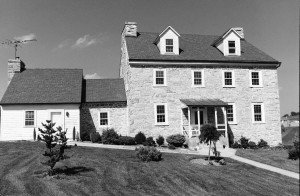 On the south side of Manor Church Road, set well back among fields, is a large stone house with its back turned firmly toward the road. This is no flaunting of convention. At some earlier time, the road lay in front of the house; but it was moved long ago, and now all traces of this earlier route have been obliterated. Beside the house is a small stone smokehouse with its square footprint and a hip roof. Further back is a stone-end bank barn and nearby a corn crib. A tiny stream flows near the house, sometimes disappearing into the ground and traveling among the caves in the limestone karst below.

Eye Trap’s 18th century face is turned toward a wide yard between the house and the barn beyond. The windows of the house have six-over-six sashes set in massive, pegged frames. Above each opening is a flat arch made with a roughly cut keystone flanked on either side by a long, irregularly dressed stone. There are four bays, with the door in the second bay from the west. The ground slopes east toward the small stream, and the basement opens at ground level on this side of the house. On the left side of the house, a small, one-story stone wing with a modern frame addition wing has been added.

Between 1755 and 1779, Thomas Smith purchased about 434 acres of land from James Smith, who was probably his father. This land included portions of land grants called Three Springs, Addition to Three Springs, Resurvey on Addition to Three Springs and Spring Hill. In 1784, Thomas Smith had land resurveyed under the name True Establishment. This 470 and 3/4 acre tract probably included the earlier purchases. True Establishment was later resurveyed to correct errors and to add vacant land. This property contained 511 and 1/4 acres and was renamed Eye Trap. Thomas Smith departed for Bourbon County, Kentucky, in 1794, after selling Eye Trap to Isaac Hershey. It remained in the Hershey family until 1835, when Joseph and Elizabeth Hershey Emmert purchased it. The Emmert family then held the property until the end of the century. 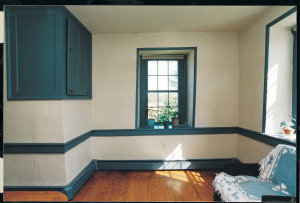 A small modern porch shelters the main entrance, a wide doorway under a six-light transom. The framing and door of this entrance are not original. Within is a broad hallway that terminates in the kitchen. A stairway on the right side of the hall rises gently to a landing, then reverses direction and continues to the second floor. The handrail is simple, and the balusters are turned.

Most of the woodwork in the house has two levels and is trimmed with ovolo molding. Chair rails circle most rooms. Many of the doors have six raised panels and are hung on long strap hinges. Some window jambs are paneled; but most are plastered, with trim molding at the interior edges over wide wooden sills.

On the left side of the hall is the parlor that is dominated by a corner fireplace. The arched firebox is plastered and decorated with a simple, painted chimneypiece. To the right of the hall is the dining room. This room has no fireplace, but displays an original cupboard built into the side of the interior chimney that rises in the gable end from the cooking fireplace in the cellar. A modern cupboard has been built on the other side of the chimney. There is almost certainly a closed fireplace here. Beyond the dining room, a small den has original oak flooring.

The kitchen, at the end of the entry hall, has a large cooking fireplace with a wooden lintel. Opposite the door from the hall is an exit into a one-story, shed-roofed frame addition at the back. A family room with a massive stone fireplace occupies the recent frame addition to the west. The one-story stone wing of the house that leads to this addition was probably original to the house; but it never had a stone wall in its western end, the end that was opened to add the new family room. Instead, there had been a frame wall there. Isaac Hershey’s 1811 will mentions two dwellings. One is described as the …wooden house adjoining the stone one… and is also referred to as the …old buildings. This description would explain why there was no stone wall at the end of the one-story wing. This wing was probably built as a passage joining the …old buildings… with Hershey’s …present mansion house…, and at some later time the old buildings were torn down. 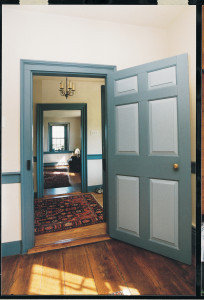 The upper hall is paneled in wide, hand-planed, beaded boards set vertically. On the stair landing, this paneling has been opened to create a doorway to the rooms on the east, and a narrow rank of three steps has been tucked into the corner of the landing. This doorway now accesses a large modern bathroom area. Originally, there were two rooms on either side of the upper hall. The northeast room has been converted into this bath area and a large closet for the master bedroom. This bedroom is in the southeast corner of the second floor and, like the dining room below, has no fireplace.

On the other side of the upper hall, the south bedroom has a corner fireplace with a mantelpiece similar to the one below. Here are original wide pine floors. This room opens into the north bedroom to form a suite, one jealously guarded by its six-year-old occupant Naseem. The north room is his library, and he proudly displays his collections of Roseville pottery and cacti for visitors.

A steep set of closed stairs leads from the upper hall to the attic. Dormers have been added on the front and the back of the building, bringing light and space into this area. Two modern bedrooms and a bath have been added, and an ample closet lighted by one of the original attic windows.

The basement can be entered from within the house by a central staircase or from the ground level door on the east. A single large room on the south has a large cooking fireplace. On the east wall, the date 1792 is inscribed, perhaps dating the house. The northeast room of the basement has a brick floor. A brick barrel-arched root cellar occupies the northwest corner of this basement. Set at right angles to the main arch is a smaller arch that has now been closed. This must have provided ventilation at one time.

When the present owners of the house, Karen and Nelson Haje, Jr., bought their property, the dormers as well as the family room had been added; and a sensitive restoration had been finished some time earlier. However, there was a twist in the east wall of the structure that began to look dangerous. Masonry experts discovered that the stone wall had been laid directly on the clay, without foundation. Greatly concerned, the owners consulted engineers and hired a contractor. The mud was excavated and foundations laid. Repairs seem to be holding.

Eye Trap is filled with lovely period pieces and a collection of early lighting devices. There are many plans, many future projects; but, in the meantime, it is a lovely home for the charming Naseem and his family.

Epilogue: Things are much the same at Eye Trap.

This article appeared in the Herald Mail Sunday, October 5, 1997 as the 96th in the series.