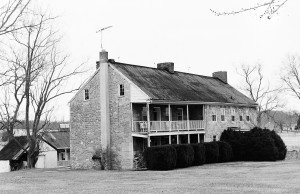 Two curved stone fences mark the entrance to Three Springs Farm, settled behind Manor Church in south county. The stone ends of a great barn loom beside the drive, soot still marking the exit of flame and smoke from all its vents, roof and floor gone, victim of a lightning strike last year.

Beyond the barn, a large stone house built on a downward sloping hill faces east; and, behind it, several dependencies. In 1794, John Booth, youngest son of Bartholomew Booth of Delamere and his wife Drusilla granted 175 acres of land called Resurvey on Three Springs to Jacob Wolf for a payment of £875. Jacob Wolf transferred title to 242 and 1/2 acres to David Wolf …his heir and offspring… in 1822 for a sum of $13,323.75. At David’s death in 1846, this farm passed to his son Daniel, who was born in the house in either 1825 (J. Maurice Henry, History of the Brethren Church in Maryland) or in 1829 (T. J. C. Williams, History of Washington County, Maryland). Thus David Wolf probably built the house between 1820 and 1830. 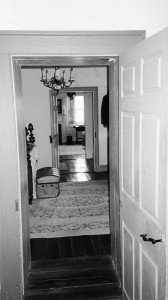 Daniel Wolf became an elder and a bishop in the Manor Church and lived his entire life at Three Springs. He married Ann Maria Rowland; and, in 1894, he transferred title to the farm to her …for and in consideration of the sum of money received from his wife through her inheritance and in future consideration of love and affection… During his lifetime at Three Springs, Daniel Wolf hosted Love Feasts for his church, crowding the farm with more than 400 people for the weekend. Wolf died in 1899, and the farm remained in his family for another 30 years. In 1965, it was purchased by the Browning family, Warren, Jean and their son Warwick, as an investment. The farm was run down, and the Brownings came on weekends to do the arduous restoration work. After years of effort, Warwick had fallen in love with the farm and moved there permanently.

The home was constructed in two sections. At the right (north) is a two-and-a-half story, five-bay block with quoined corners and segmental arches over the doors and windows. These arches are made of large stones, with a keystone and three shaped stones on each side. Original raised German pointing finishes the masonry, and some unusual triangular stones have been used in the walls.

To the left of this section of the house is a wing with a double porch set under the main roof span. Here some of the windows have simple arches, while others do not. Three windows and two doors open onto the lower porch, while three windows and a single door access the upper one. On the lower level of this wing of the house are two rooms, both the depth of the wing. On the left (south), the narrow original kitchen has a large cooking fireplace with original cabinets on either side of it. Opposite the porch entry, another exterior door leads out the west side of the kitchen to the springhouse and oven/smokehouse. The woodwork is original and simply molded. In the corner, steep stairs with narrow treads wind to the second floor. The flooring in the kitchen is random-width black walnut planks.

The other first floor room of this wing is an ample dining room with more formal woodwork and chair rail. The dining room joins the main block of the house, connecting with the music room and the present kitchen, which the Brownings built into a small back room behind the music room so that it would not intrude on the historic atmosphere of the rest of the house.

The main entrance of the house opens under a transom in the central bay of the main block. The six-panel door is three-and-a-half feet wide and has a huge iron box lock with a lever handle. The center hall ends in another exterior door. The stairway, on the right side of the hall, has balusters that are slender and square, newels that are delicate and turned. The rail is round and forms graceful arches at the landings of the stairs.

To the right of this central hall is the living room that spans the full width of the wing. It has six windows with nine-over-six sashes and a fireplace. When the Brownings purchased the house, there were two rooms in this space. The front room had more formal woodwork with turned corner blocks, while the woodwork in the back room had mitered corners. This varied trim still exists in the present living room. When the dividing wall was removed, they found that the floor had been laid before walls were built so that the flooring is continuous and does not show the earlier wall. 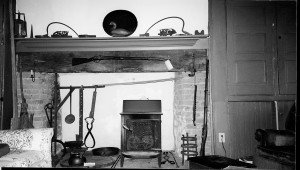 This section of the house has a basement with a large cooking fireplace in the end wall and a door exiting at ground level to the west. The second floor has three bedrooms and a modern bath built at the end of the hall above the main entrance. The second level of the wing originally had two bedrooms, one with a fireplace. This space is now one bedroom, a long hall and an elegant bath complete with the original fireplace. Throughout the house, window and doorjambs are paneled. In the more formal areas, these have raised panels; in the rest, simple hand-planed boards serve.

Behind the house the original stone bake oven has a brick smokehouse addition. The fire chamber for both opens into the smokehouse, and, at one time, there was a chimney above the oven. Beyond the oven/smokehouse is a two-story stone springhouse straddling the small creek that winds through the farm from a pond at the south. This building has an overhanging eave that shelters a second-level porch that is accessed by stairs coming up the side of the building from the right. The first floor of this structure has two batten doors under the porch, although there is a single room within. A large fireplace with a huge wooden lintel stands at one end of the room. This was probably used both for butchering and for laundry. The floor, about twenty years old, is poured concrete with a channel along the far wall to carry the stream.

The upper room, with its small fireplace, was once a schoolroom for Daniel Wolf’s eleven children, for the children of neighbors and also for the children of slaves whose masters would allow them to attend. Wolf was pastor of the Manor Church of the Brethren for 39 years and was a devout man who did not believe in slavery. He did, however, buy slaves and let them work on his farm to earn their purchase price, then set them free. 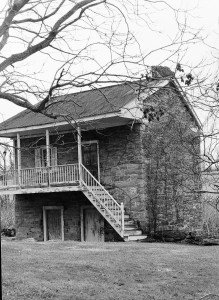 When the Brownings purchased the property, the springhouse had no roof; and all that was left of the schoolroom was a set of shelves beside the fireplace. They restored the building and even furnished the upper room with school desks that face the original bookshelves. They soon hope to fit the barn with a new roof and floor as they continue to care for their fine, old farm and cherish its memories.

Epilogue: Warwick Browning reports that nothing much has changed at Three Springs.

This article appeared in the Herald Mail Sunday, September 3,1995 as the 72nd in the series.