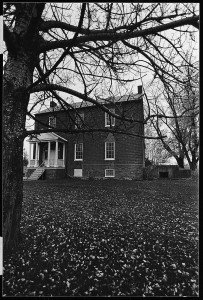 Not far from Route 62 north of Chewsville, shielded by undergrowth and the remnants of a large barn, a gracious brick home sits at right angles to the road, facing north. This home was built by an early pioneer of the county and named The Hive by him. The reason for his choice in names is thought to be the bustling activity created around the homestead by his twelve children and the work necessary to sustain life in the surrounding wilderness.

The community that grew up near The Hive in the early l9th century was known as Fitzhughsville* in honor of the prominent family that built and lived in this grand country home. There is no longer a Fitzhughsville, its pronunciation slurred and contracted until Chewsville resulted; but The Hive still stands, a stately but neglected presence north of the present town. Built by William Fitzhugh, a colonel in the Continental Army, the original section of the home is a log wing one-room deep and a story high. A two-story section was added to the north, and finally the elegant two-and-a-half story brick wing, laid in Flemish bond, was built adjacent to that. This segment of the building was probably added by the son of the original builder around the middle of the 19th century. A one-story brick kitchen is attached to the south gable of the complex. The south and west sides of the log structure were cased with brick, while the eastern face is sheathed in weatherboard and finished with a low porch across its breadth.

The most commanding feature of the house is the elegant front entrance to the brick section. Its elliptical fanlight with rayed muntins crowns the three-panel door and the broad, segmented sidelights. Protected by a porch with a pedimented gable supported by four octagonal columns and elevated several steps above ground level, this imposing entry was seldom used. The original avenue led to the ground-level porch on the eastern side of the log wing, and this entrance had been long established before the brick section was built. The present driveway comes east from Route 62, and the house sits perpendicular to the road, facing the drive. On the western side of the house is a grass-covered mound of earth that shields a root cellar from wide changes of temperature. This cellar is built of brick in a continuous arch from one edge of the floor to the other in order to withstand the weight of the earth piled on top. To the south is a smokehouse with a steep hip roof. These remaining appendages give one a glimpse into the life of a prosperous Washington County family. These remote farm complexes had to be self-sufficient in producing the basics of life. 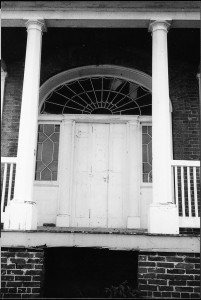 The Fitzhugh family was important in colonial America. William Fitzhugh’s father William, Sr., was a colonel in the British Army who resigned his commission at the beginning of the revolution and retired to his estate Rousby Hall at the mouth of the Patuxent River. When the British took 40 of his slaves and burned his buildings, he moved to The Hive with his son. He later appealed to the Maryland legislature for reparation of the damages he suffered because of his support of the revolution. This claim was finally paid to his great-grandson in 1860. William Fitzhugh, Jr., married Ann Hughes, the daughter of Daniel Hughes who owned several forges and large tracts of land in the area. In 1810 when he was 50, William Fitzhugh, Jr., moved to the Genessee River Valley in New York with Charles Carroll and Nathaniel Rochester, where the three men founded the city of Rochester. Colonel Fitzhugh died in New York in 1839. Ten years earlier, he had deeded The Hive to his eldest son William for $20,000; and the family continued to hold the property until 1862.

The present status of The Hive is guarded. The log section was renovated a few years ago and is occupied by tenants; but the brick wing is deteriorating, unused except for storage. The property has been owned by the George Horn family since 1973 and is presently for sale, part of a large tract of land slated for development. It can only be hoped that the new owner will honor the vigor and courage of these early settlers and save this lovely building.

*Scharf’s History of Western Maryland reports that Chewsville was named after Samuel Chew, Jr., who was a friend of William Fitzhugh. Chew’s father had patented 5,000 acres in the southern part of the County in 1763. Howard Spessard, historian of the Chewsville area, found an old deed referring to a road …leading from Fitzhughsville to Beaver Creek.., and thus felt it more likely that the name was a contraction of Fitzhughsville.

Epilogue: The Hive is decayed beyond repair. Demolition by neglect. A sad end to a great house.

This article appeared in the Herald-Mail Sunday, November 5, 1989 as the 7th in the series.