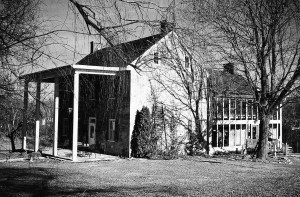 Landis Road is in transition. Once a quiet country route, it is blooming with new apartments, residential communities and construction. Part of the past remains, however; for down a long lane, behind white board fences, lies one of the earliest farms in the area. Seventeen acres of rolling land surround the stone house and barn that are set near a farm pond among large trees and rows of white pines. 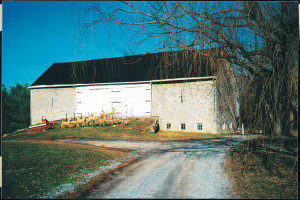 In 1783, John Winders bought his first piece of Washington County land from Henry Dudwiler for £500 in gold and silver. This parcel contained parts of several original patents, including one named Resurvey on Old Fox Deceived. There were a number of other land transactions over the years in which sections of Mudcap’s Meadow, Daniel’s Luck and Kelly’s Delight were acquired. In 1835 the farm, with pieces of these patents, passed to Jacob Winders. The great stone barn, about 40 feet by 80 feet, was built at the end of the 18th or early in the 19th century. There followed the handsome stone house with four bays and a long ell with a double porch under its main roof span. 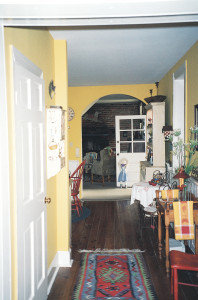 When Jacob Winders died in 1863, he left no will, no widow and ten children, three of whom were minors. Original documents still exist at the courthouse of an equity case brought to the estate. James M. Grove appeared to give testimony in the case and stated that Jacob Winders had a …240 acre farm—has a good dwelling, built of Stone, a large stone barn, Corn Crib, Wagon Shed and other out buildings, that it is a well improved farm and is now in excellent condition, Deponent regards the Farm as worth Seventy dollars an Acre. Grove continued, …Lands when rented out generally go down in the hands of tenants because tenants are not apt, generally, to take the same care of Lands as the owners are—they look more to their own interests than they do the Landlords.

David Beeler, another acquaintance giving witness, stated that …he knew Jacob Winders in his lifetime, that he died sometime last summer after the Rebel Army left this County… and he supposed the Farm to be worth Eighty Dollars per acre. Beeler then added, …Lands are now selling well, and if the property sold and the money invested, the minor heirs would get their six per cent, but they wouldn’t get that by renting it out.

A Trustees’ Sale was held in January, 1864, and the advertisement describes the farm as:

“first quality of LIMESTONE, in a high state of cultivation, and under good fencing, principally post and rail;—about Twenty ACRES of it in TIMBER. There is a large and first rate ORCHARD on it, three WELLS and a SPRING of running water. The improvements are a large TWO-STORY STONE DWELLING, with a BACK BUILDING*, a large Stone Swisser BARN, with all other necessary and convenient outbuildings, including BLACKSMITH SHOP, Ice House with cellar attached to the Ice House and all in good order.”

*Back building is another term for the ell or wing of the house and does not refer to a separate structure. 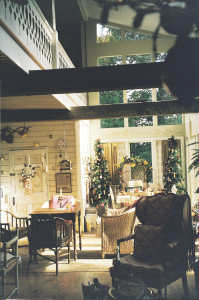 The farm changed hands numerous times, remaining in the Martz family from 1917 until 1970 when it was again sold and then subdivided. In 1976, Nicholas and Jody Long purchased the farmstead and its surrounding acreage.

The house faces west with the main entrance in the second bay from the south protected by a columned, two-story porch that was added by the last owner before the Longs. A four-light transom surmounts the door that enters into a reception area. Closed stringer stairs rise to the right of the door, crossing the window in the first bay on both the first and second levels. The balusters are slender and square beneath a simple handrail.

Behind the entry way is the original parlor now used as an elegant first-floor bedroom. Woodwork in both this room and the entry is elaborate. The jambs of windows and doors are paneled. The mantel in the parlor is decorated with delicately beaded bands. To the left of the parlor is a larger living room. The mantel over this fireplace resembles the one in the parlor/bedroom with the same square pilasters, broad panel and shelf arrangement, but without any beading. The door and window jambs are also finished with plain rather than paneled woodwork, making this the less formal section of the home.

Beyond the living room, in the ell, is a bath and the kitchen, followed by a family room in what once was the original kitchen. A cooking fireplace was built in the gable end wall. It is now equipped with a raised hearth and a recent grate built into the masonry at about waist level to improve the draw of the chimney. Two doors access the lower porch from the ell, and there is a Victorian-era balustrade of scroll-cut splats on both levels of this porch. Beneath the original kitchen fireplace, at the basement level, is another cooking fireplace. 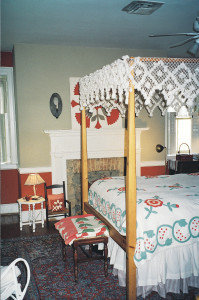 Upstairs, the rooms are laid out much like the first floor. The large front bedroom over the living room has an elaborate mantel with several bands of delicate beadwork and oval medallions, quartered and beaded. The middle room in the ell is filled with whimsical rabbits of all shapes and descriptions. Made of cloth or carved in wood, they fill the bright room with color. The last room in the ell, beyond the back stairway that comes from the kitchen, is an office filled with sunflowers in pictures and fabrics of all descriptions. Jody Long loves to decorate, she fills her house with bright colors and wonderful patterns. Antique quilts spill through all the bedrooms, and Jody has stenciled patterns on the walls of several rooms.

The Swisser barn sits at right angles to the house on the west side of the lane. It is built entirely of stone except for the western gable end, which is rough planks painted white. There is a bow in the stone foundation at this end, so perhaps that wall of the barn collapsed at some point and was replaced with wood. Beneath the forebay, the barn is closed, accessed by seven doors (all double now) hung on hand-forged strap hinges. Beyond the barn, facing the house, are a tennis court and other modern farm buildings. It is here that Nicholas and Jody have their comfortable office.

Stonemont is an island of serenity in a bustling neighborhood of newly built homes and apartments. It is a lovely link to the past that offers a comfortable, quiet life for the Long family.

Epilogue: “Orangery” is an 18th century term for a greenhouse built to shelter orange trees and other fragile plants, and the word continues to turn up at elegant spas and glassed spaces. The Longs have added an orangery by enclosing and enlarging the double porches on the ell with large expanses of glass. The old has been left unchanged and married to a crisp, new addition using shed forms and broad, wooden mullions between the windows to evoke post and beam construction. The lower porch and the roofline have been extended, and the upper porch remains as a balcony, its decorative balustrade intact and lit by skylights in the new roof.

This article appeared in the Herald-Mail Sunday, January 8, 1995 as the 64th in the series.