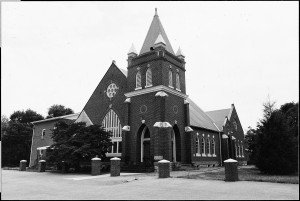 Beaver Creek Church Road winds through the picturesque countryside north of Route 40. The eponym of this road stands near its southern end, a one-story brick building set on stone foundations 95 feet wide and 50 feet deep. A substantial square tower, two stories high, with a sharply peaked spire and small subordinate peaks at the corners of the tower stands on the left. Heavy wooden doors with dramatic iron strap hinges provide entry to the church at the base of this tower. There is a large stained glass window in the north gable beside the tower and five smaller ones in the wall facing the road. Each is set in a pointed Gothic arch that has a keystone at its top. On the right, a gable faces the road and shelters the education area within. Doors enter at this point and both the church and the Sunday School can be accessed from them.

Within, the altar is centered on the long, east wall of the church section and the floor slopes down toward it. The three sections of curved pews form a semicircle before it. Boxed beams support the ceiling, and there is a simple narrow-board wainscot. The partition wall between the church and the Sunday school consists of two great doors made of narrow wood slats that roll up into the ceiling.

Following the American Revolution, a great religious revival swept the land as people sought to find spiritual support in a country that guaranteed religious freedom. It was a tumultuous time as new concepts were broached and old alliances broken. The sturdy frontier families sought a simple religion that relied on the New Testament and freed itself from tradition. In 1804, Barton W. Stone, a minister then in Kentucky, preached the union of all who believed in Christ. Three years later, in the wilderness of Pennsylvania, Thomas Campbell and his son  Alexander  sought reform and revival in their church. These two movements joined, and in 1832 the Christian Church (Disciples of Christ) was born.

Just a year later, the con­gregation at Beaver Creek formed; and the first converts were baptized by immersion in the creek. A single story stone church was built in 1845, but it had no baptistery. In 1860, on John Newcomer’s farm, (now Scratch Ankle Bed and Breakfast) the congregation built a baptismal pool in Beaver Creek near the iron bridge on Beaver Creek Church Road. This pool served until 1903, when the present church was built with a pool under the floor behind the altar.

Among the earliest of Christian (Disciples of Christ) Churches, Beaver Creek Christian Church will mark its 160th anniversary on October 24,1993, with a grand celebration that will include an actor depicting Alexander Campbell and the early history of their church.

This article appeared in the Herald-Mail October 3, 1993 as the 50th in the series.