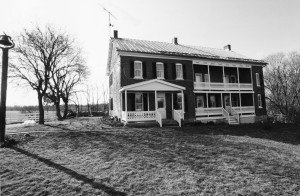 Along the Old National Pike south of Funkstown a sign announces Rocky Spring Farm; and a long lane is directed past a tidy brick house and a number of low-slung metal farm buildings on the left, to a large asphalt parking area. To the right, centered in a broad yard, is a brick house. A portico supported on three columns covers the nearer door. Double inset porches with scroll cut splats in the balustrades shelter a five bay addition with yet another entrance. There is a four light transom over each door. The windows are two-over-two with gentle arches in the top sashes and segmental arches in the brick above.

The side of the house closest to the lane is stone, which terminates at the level of the eaves, with the gable built of brick. This is the earlier section of the house. At one time it was a three-bay house with gables on the opposite walls. The original stone gables were removed to turn the roof 90 degrees, then a new brick gable was built up from what was once the top of the wall under the roof edge. There were three exterior doors in this stone house: the present one, one in the stone side that has been closed in and one in the side away from the lane that still retains its stone threshold between the living and dining rooms. This may have been the original front door, for a road once ran past the house to a fording of the Antietam Creek, the western boundary of the farm. This house apparently had one large room downstairs with a large stone fireplace on the western wall. The three by four foot firebox of this fireplace is surrounded by a mantelpiece seven feet tall. Broad, hand planed panels and wide molding make this simple mantel elegant. The original windows retain their massive pegged frames and have paneled jambs.

A brick wing was added to the stone house about 1875. This wing was set back from the front façade so that the stone-silled door of the original block still exited outside. Later, the brick wing was extended so that the front façade was straight, and double porches were inset under the main roof span. It may have been at this later time that the gable was turned and the front of the stone section was faced in brick to match the wing. These changes made the roof ridge straight across the entire structure, altering the orientation of the house so that it presently faces the rather distant road now known as the Old National Pike. 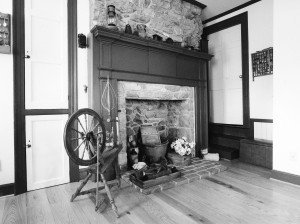 The single room on the first floor of the stone wing was divided, from side to side, into two rooms. A freestanding brick chimney was added, supported by the first floor joists and extended through the roof. A lovely mantel with incised patterns, reeding and rope decoration was placed in front of the chimney; but no fireplace ever existed there—just a stove whose pipe ran into the chimney through a thimble in the wall above the mantel.

The brick wing is divided into two rooms on each floor. In the dining room the woodwork has been stripped of paint, revealing lovely pine and chestnut. The original wide door has six panels; and the mantel has rectangular strips arranged in a flat, stepped pattern, giving it a very Art Deco look. The beaded tongue and groove wainscot was turned over, sanded and finished instead of being stripped. Woodwork is flat with plain corner blocks, and the stone wall of the early house has been exposed. When the plaster was removed, a curious oval hole about eighteen inches deep was found about five feet from the floor near the door. Was this a hiding place, a cubby to hold a lamp, a hole used to support a part of the original scaffolding or something else?

The kitchen is the further room in the brick wing. The end wall originally was a cooking fireplace that has been reconfigured into a smaller one. Two sets of enclosed stairs lead to the second floor, one in the kitchen and the other between the dining room and the back room of the stone section. Upstairs are four bedrooms and a large bath. The back bedroom of the stone section has an unusual fireplace that has the back wall and right side built of stone, while the left side and the flat lintel are built of brick. The mantel is another simple, but lovely piece of woodwork similar in style to the one below. The bedroom above the dining room has been divided to accommodate the large bath at its front. This is a bath of many doors, for it has exits to three adjoining bedrooms, a closet and the upper porch. The last bedroom, over the kitchen, extends the full depth of the house and is quite large.

Behind the house two large rocks emerge from the ground, and from beneath them rises the rocky spring that gives its name to the farm and still provides water to the house and many of the outbuildings.

John Shank’s parents purchased this 106 acre farm in 1943 from the estate of Ira Doub and ran it as a self-sufficient general farm operation. The family farmed together and were still using Percheron horses to till the fields in 1956, one of the last farms in the county to use horses.

Every fourth of July, John Shank could expect to be shocking wheat. First the edges of the fields and the rock breaks were mowed with a cradle so that no grain would be lost. The gathers of wheat were tied together with a straw as these edges were cleared. Then the mechanical harvester was brought in. One man drove and another worked at the back of the machine, dropping the gathers into the field as they were made. The family then collected the sheaves into shocks to dry; about a month later, fifteen or twenty men would bring the shocks to the threshing machine where the straw was separated from the grain. These men were farmers who traded labor, each helping the other with their harvests and sharing noon meals at the farm on which they were working. Bunt Martz owned the threshing machine in the area then and spent the summer going from farm to farm threshing. At that time it took three men to farm 100 acres. Now, two can farm 400.

In 1963, John and his wife Beth purchased the farm from his parents, who retained the right to occupy the newer brick section of the house and to share the use of the bathroom.

Originally, there was an old stone and frame barn at the farm. On February 13, 1980, at 11:10 P. M., the barn, filled with hay, feed and four tractors, burned and arson was suspected. The family was devastated by the loss. The stone ends remained standing, but the stone was softened by the heat and the barn could not be rebuilt.

The nature of farming had begun to shift toward business, and the Shanks began to specialize in a dairy operation in 1950. Four or five family members milked fifteen to twenty cows by hand twice a day, poured the buckets of milk into ten-gallon milk cans, and hauled the cans to the flowing spring, where the milk was stirred until it reached the 50-degree temperature of the spring water. The milk was picked up from the spring by a truck that took it to a dairy to be processed.

Technology arrived in the form of the pail milking machine. A vacuum pump milked the cows into a lidded pail, eliminating the hand milking. Later, a pipeline milker was installed. The vacuum delivered the milk to a 1,500-gallon tank in another room, where it was cooled to 36 degrees in an hour and stored until a tank truck picked it up. In 1966, a milking parlor and a free stall barn were built. The cows are no longer tied in stalls to be fed or milked; and they now eat at a long, automated feed bunk that allows one man to feed a hundred cows in fifteen minutes. The higher producing cows have computerized necklaces that allow them to get extra feed from a special box in one area of the barn. When they are milked, the cows walk into a building with six individual stalls and feeding stations. The center pit is 30 inches beneath the floor, allowing the operator to attach the automatic milking machine without stooping. When the flow of milk is less than a half-pound a minute, the machine detaches itself. This machine also keeps track of the milk produced by each cow. Automation has arrived.

John Shank’s son John II farms with his dad now and lives in the other house on the farm with his family. The old house is now home to John and Beth Shank. It is filled with Beth’s quilts that she has made over the years—pieced quilts, quilts of appliqué, trapunto and embroidery. Several are celebrations of her marriage, and John’s favorite is the one that commemorates their 25th anniversary.

On the floor of the back bedroom are two small hooked rugs, mementos of John Shank’s youth. During the winters, he and his brothers would work the cut fabric strips through the burlap backing, following designs created by their mother. Implements of an earlier time fill the house; most had been used by the family, and then saved for their particular grace and charm. There is a cherry pitter. Oil lamps sit on shelves and iron pots hang on trammels in the fireplace. A charming wicker-back buggy with iron wheels that could carry a small child pulled by another stands in one room.

The house at Rocky Spring has evolved and grown to fit the needs of its owners. John and Beth Shank have suited it to their family but have respected its history. John removed the concrete walk and rebuilt the herringbone-patterned brick walk that was under it. Some day the remnants of the smokehouse that stand behind the home will be rebuilt, too. Rocky Spring Farm has seen enormous changes in the years the Shanks have owned it. Wheat is now harvested with a modern air-conditioned combine. Hay is no longer cut by hand or with horse-drawn mowers; it is cut by self-propelled mower windrowers and formed into round bales. The 21st century is nearly here, and Rocky Spring is ready.

Epilogue: John has rebuilt the stone wall around the house and along the front yard using the foundation of the wall that once was there. The pool has been removed from the yard and the Shanks are considering replacing the kitchen flooring with old boards.

This article appeared in the Herald-Mail Sunday, April 5, 1992 as the 33rd in the series.