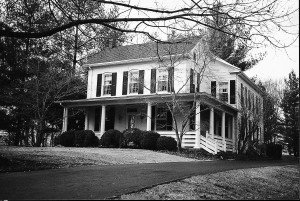 Beyond Funkstown on Alternate Route 40 just at the edge of town, a low drive crosses the Antietam on a single-lane iron bridge with plank treads. Across the bridge, a lawn shaded by old trees and mature shrubs presents itself; and a sign proclaims, God’s Provision. A white painted brick house with a clapboard wing toward the rear sits on the hill that slopes steeply toward the Antietam on three sides. This knoll is settled in one of the horseshoe bends of the meandering creek; and toward the back of the property, where the creek begins its turn, a shallow swale extends across the neck of the peninsula from the upper to the lower section of the creek. This is the last vestige of the Antietam Canal. 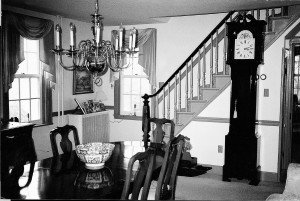 Funkstown was laid out by Jacob Funck [sic] in 1767 and was named Jerusalem. The site lay along an Indian trail that led to Baltimore and by 1790 stretched to Terre Haute, Indiana. For years, this trail had been used to drive cattle, hogs, sheep and turkeys to markets; and it became a major road in the opening of the west. Jerusalem grew to serve the wagoners and drovers who passed through it. In 1784, Dr. Christian Borestler and his family, accompanied by 70 other families, arrived from Germany. In 1790, Dr. Borestler purchased a piece of land containing this bend of the Antietam from Henry Schrader. Dr. Borestler taught school and built a powder mill along the creek. In 1805, the powder mill blew up; and, on June 14, a notice was placed in the Maryland Herald Hagers-Town Weekly Advertiser, which read:

As it is conjectured by men of intelligence that something has either designedly or accidentally been thrown into my powder-mill which occasioned its catching fire, to the considerable damage of myself and narrow escape of my son, then employed in said mill; I therefore regret that I am under the necessity of notifying, that I cannot in future allow any person to enter within my fence or enclosure at said powder-mill, for the purpose of fishing, or any other pretence; as I shall in that case be compelled to proceed with every such offender, as the law directs. Having now provided myself with a particular hand for manufacturing powder, I shall in future be enabled to supply all those with good powder of all kinds who wish to apply.

There were many mills along the Antietam, so many that they sometimes got in one another’s way. John Henry Shafer’s Antietam Woollen Mill was upstream from Borestler’s, and Borestler’s millrace backed up into Shafer’s mill. Shafer sued, and Borestler had to lower his dam and repair the damage to the machinery in Shafer’s mill.

In 1812, canal building was exploding over the country. An advertisement in the Maryland Herald placed by the Potomac Company read:

A number of masons are wanted to construct Stone Locks on the Antietam Creek in the course of the ensuing summer. The Subscriber will attend at the house of Christian Fechtig, at the sign of Columbus, in Hagers-Town the 12th day of February next, and continue there a few days for the purpose of contracting for doing the stone work of said Locks by the perch or otherwise, as may be agreed upon. Liberal terms will be given to such master masons as can be depended on, and who will undertake to employ hands adequate to the completion of one or more Locks in the course of the season. N.B. Each Lock will contain about 400 perches* of stone work.

There were also advertisements for subscribers to the Antietam Loan, which was to finance the canal. On April 7, 1812, J. Thomson, Superintendent of the Potomac Company, advertised that …The undersigned has already contracted for a number of the locks, and the work is progressing and will be finished at an earlier period than was originally contemplated. Other ads requesting proposals for erecting Locks and opening and completing navigation of the Antietam Creek, …from its mouth to the mills of Messrs. John and George Harry…, near Hagerstown, and distinct proposals for extending the navigation to the Pennsylvania line, appeared in the local papers during May of 1815. 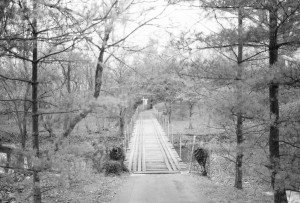 There is no further mention of the Antietam Canal in the local papers, but in 1899 Jacob R. Stonebraker’s memoir of the Civil War, A Rebel of ‘61, was published, and in it he recalls John Henry Schafer, who owned the Antietam Woollen Mill on the bend of the Antietam just below Funkstown:

About 1808 a charter was secured from the State for the Antietam Canal Company, who proposed to make the creek navigable to the Potomac River, by means of slack water.

In 1812 the company built two locks, and connected the two dams by digging a canal some eight hundred feet long. The boat which was about one hundred feet long, gondola shape, sharp at both ends, without deck, was loaded with one hundred and twenty-five barrels of flour, passed safely through the canal and into the lock, but was wrecked while passing into the lower dam, and the cargo became a complete loss.

This accident so discouraged the company that the project was abandoned and Schafer afterwards utilized the canal by building a saw and cement mill over the locks. Indeed, this misfortune may have spelled the end for any further efforts to build Antietam Canal.

The bend in the creek continued to be important through the 19th century. Sand was excavated from its shores to make mortar for most of the brick homes in Funkstown, according to William Bierly, a local historian. In 1901 John W. Johnson and his wife Annie bought the property from Jacob and Adaline Stouffer and lived there for 50 years. Johnson raised and sold flowers, pigeons and chickens; and he also worked at Weisner’s Manufacturing Company, which made parts for Moller organs.

Originally the island was reached by a swinging bridge built on cables, which cost about $150, but a college boy from Dickinson hit the support column with his Model T in 1930, and J. D. Baker was contracted to build the present bridge at a cost of several thousand dollars.

Anne and Paul Cox, the present owners of this lovely property, were intrigued by an ad that offered a house on an island for sale in Funkstown. When they first saw it, the house was in poor condition; but the setting had the potential to be charming. After some discussion, confident in Divine guidance, the deal was struck. The original house had been a modest one with small rooms and two-over-two window sashes typical of mid 19th century construction. The wall dividing the front two rooms had been removed to make a larger space, and the original handrail and balustrade remained.

A large family room, kitchen and porch were added in the back; and just last summer, a large deck was built. Surveying her project and fretting that it might be too large, Anne Cox suggested that when it was time to sell, it might be advertised as “Deck for sale with house attached.” The rooms of the house are warm and bright and beautifully decorated. The Coxes have added boxwoods and gardens under the large trees that shade the knoll. There are flowers and rock gardens and grandmother’s sleigh decorating the yard. An old three-stall barn with German siding sits several yards behind the house on the edge of the knoll. It is a serene and quiet spot, a sanctuary from the busy world. How different from its early days when the mills ran and the millers quarreled. The Coxes consider themselves stewards, not owners, of their lovely property and hold themselves fortunate to be able to care for and enjoy this solitary spot on the edge of Funkstown.

Epilogue: The Coxes have winterized the porch with windows and added rock gardens and a stone wall, but Johnson’s Island remains much the same as it has been.

This article appeared in the Herald Mail Sunday, December 1, 1991 as the 30th in the series.