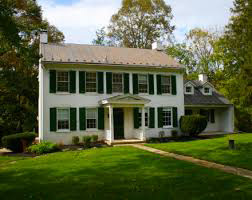 A handsome white-painted brick house, laid in American bond, with interior brick chimneys stands on the narrow strip of land between the creek and the west side of the pike. Five bays wide, the main block of the house has a central six-panel door topped by a broad transom with diamond-shaped panes. Square posts support a one-bay pedimented porch.

Openings in this facade have large wooden lintels with projecting corner blocks and six-over-six sashes. Low fieldstone foundations support the structure. Attached to the north- end wall is a 1 1/2-story wing with two small gable-roofed dormers. 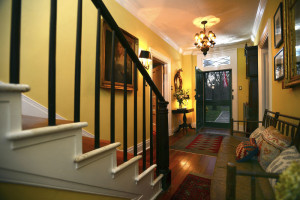 The front door opens into a central hall with a staircase accessing the second story. The staircase has a large, turned newel post and turned balusters. Interior woodwork is simple, with turned corner blocks in the important rooms and plain blocks elsewhere. These finishes suggest a building date in the middle third of the 19th century, when the Greek Revival style was popular in the United States.

A former owner turned the space south of the central hall, once double parlors, into one large room with wainscot, ceiling moldings and a fireplace with its original mantel. 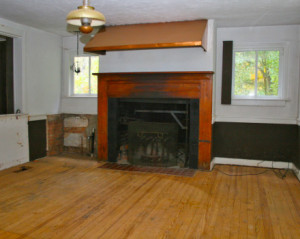 In the front yard, under a wooden cover, a round, brick-lined well about 25 feet deep can be seen, empty of water. At some point, the well broke through the karst terrain into a cave system that runs under the road toward Beaver Creek. The cave is listed in the Maryland Geological Survey.

Near the road stands a cast-iron lamppost with a large glass globe that once glowed with gaslight. A three-car garage with a mechanic’s pit stands to the south of the house.

Behind the house are a two-story springhouse and a small stone structure without its roof, said to have been a slave dwelling and last used as a garden space facing the creek. 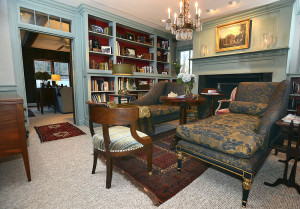 Deed records are obscure, but this homestead seems to have been part of what was once a farm of almost 200 acres. The old, handwritten deed reports that Holcher Hughes sold a parcel of land to Philip Schindel in 1850, and that, after Philip Schindel’s death, the farm was sold to David Schindel in 1856. The deed stated that the farm included parts of land grants named “Cadiz,” “Strife” and “Emmert’s Home.”

Since architectural details date the house to around the middle of the 19th century, it is probable that the Schindels built it. A Schindel descendant verified that the family called the house Cool Hollow House before the Civil War.

The parcel now contains about seven acres, two of which lie across Antietam Creek, where the remains of a stone mill can be seen. The 1941 deed (L 214/f 278) mentions “a nine-room brick residence.” This is most unusual because deeds almost never mention specific buildings. Another early deed describes “improvements thereon … situate on the west side of Alternate Route U.S. 40 at Death Curve.” 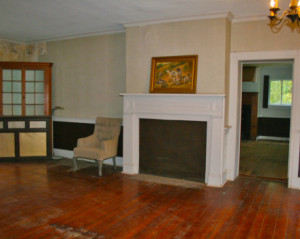 For more than 20 years, Thomas Freeman has collected paintings and antiques that he placed in storage while searching for the perfect home for them to furnish. At last, his search brought him to Cool Hollow House.

Its bones were good. Windows had wavy glass; woodwork was original; the size and scale were right.

But it took an experienced shopper to see all the pluses of the house. It was rented for a decade, and was worn and out-of-date. Worse yet, having been emptied of tenants and placed on the market, thieves broke in and stripped the house of all its copper piping. It would be a huge job to restore it, a complete rehabilitation from roof to cellar. 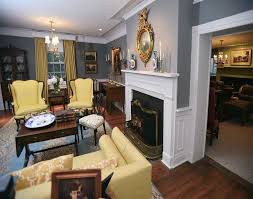 After. Photo by Kevin Gilbert/Herald-Mail.

The standing seam metal roof, with barge boards set against the end walls, received a coat of paint. The gutters, when emptied of years of clogging debris, were revealed to be rolled steel, needing only to have rust removed to be returned to use. The missing pipes were replaced with new copper ones.

As the contractor continued his work, he found that all the beams, floors, subfloors and studs were oak, the most durable local wood available. The quality of the materials used to build the house prevented much greater damage from occurring while it was neglected. 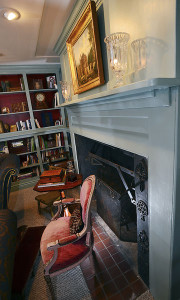 The living room to the north of the central hall has newly painted walls and refinished floors. A powder room under the stairs has been added. To the north, in the story and a half wing, the original kitchen is under restoration. That space retains its massive service fireplace with its original mantelpiece and cranes. This will become the library with custom-built floor-to-ceiling shelves on the walls and a game room with a crystal chandelier.

Two bull’s-eye glass panes are set in one of the east window sashes, added by a previous owner who collected them in England. On the west side of the original kitchen area, a 1960s sunroom, with three walls of windows and a built-in pine corner cupboard, faces the creek. 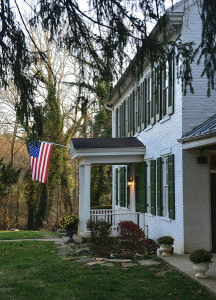 Steep winder stairs lead from that area to the half-story upper level, which is lighted with the two east-facing gabled dormers and two windows in the north-end wall. The area will be completely restored, to be used as a room for the family’s children when they come to visit for holidays.

The large space to the south of the central hall will become the new kitchen/dining room for Cool Hollow House. It has a fireplace on the end wall and windows overlooking the side and backyards. Paint colors throughout the house have been carefully chosen from Sherwin Williams’ historic paint pallet for the Greek Revival time period.

The upstairs has five ample bedrooms with a bath at the end of the hall on the east.

A previous owner intended to turn the property into a bed-and-breakfast inn, only to find the permitting process difficult to complete. Because the owner could find no other way to use the house, it was rented and neglected, then vandalized and put at risk.

The ample yard was engulfed in underbrush, but clearing revealed a lovely pond with a central statue in the backyard. The pond is lined with concrete and edged with marble. It has a custom drainage system that still works. Water goes over a fall into the pond.

Electric lighting is hung in the venerable backyard trees, and, when the circuits were turned on, three of the lights were found to still have working bulbs. A springhouse, potting house, smokehouse and cistern also scattered around the backyard.

Just south of the property, the Cool Hollow Culvert can be seen emptying Beaver Creek into Antietam Creek. Built in the first quarter of the 19th century during the construction of the National Road, the culvert also is individually listed as an historic site.

Cool Hollow House has been reborn as an elegant home, fitted with fine furnishings and loved by its new owner.

But the house is more than the built structure. It comes with memories, as well.

During the 1863 Gettysburg campaign, the Confederates confiscated cattle, hogs, wheat, corn and other commodities from the farm, which were later valued at $866, a debt never collected. (This is nearly $26,000 in present-day money.)

Neighbors tell of one of the earlier owners, Red Long, who owned a 1933 Rolls Royce, a luxury car built mostly of wood. Long lovingly worked on the car in the three-car garage, and the car shined like lacquer. One year, when prom time came, Long offered to take some of the neighborhood high-school students to their prom in that car, giving them the thrill of their lives.

Newel: the vertical posts supporting the handrail at the top and bottom of a stairway

American bond: a common bond with three to five courses of stretcher bricks to each course of header bricks

Lintel: a horizontal structural member that supports the load over an opening, such as a window or door. This beam spans the opening and rests in the wall on either side.

Bull’s-eye panes: Glass blown with a circular pattern created by varying thicknesses in the glass

Six-over-six sashes: window frames (sashes) with six panes of glass in each, positioned in a window opening, one above the other

Bargeboard: a board placed on the incline (verge) of a gable to conceal the ends of rafters

Pediment: a triangular section framed by a horizontal molding on its base and two sloping moldings on its sides. It is used as a crowning element over doors, windows, mantels or niches.

Corner blocks: square blocks of wood positioned at the corners of window and door casings that often are treated with design elements such as turned discs

This article appeared in the Hagerstown Maryland Herald-Mail Newspaper, Sunday November 29, 2015 as part of the ongoing series on the Architectural and Historic Treasures of Washington County, Maryland.