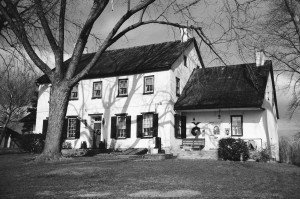 South of Hagerstown on the Sharpsburg Pike, Rench Road intersects to the right and heads west through a wide, flattened expanse of farmland. Past railroad tracks, on the right side of the road, a white house trimmed in black sits well back from the road behind an assortment of farm buildings, paddocks and an enormous stone bank barn that is perpendicular to the road. A broad, shallow stream drifts past the house toward the road and aged trees shelter the yard. More than 40 years ago, Frank and Sally Artz moved to this farm as newlyweds. In those years they have farmed, raised their children and developed an abiding interest in the history of their farm and the tools that early settlers used to help them survive.

Brothers Henry and Jacob Funck [sic] came to western Maryland around 1749 and speculated in land. Henry purchased adjacent tracts called Shippens Neglect and Marsh Head upon which he built his home. This tract was named for the five large springs that rose in the field north of the Artz’s house and created the wide stream that flows near it. A deed written on parchment in flowing script transfers land from Jacob Funck, yeoman, to George Swingle, farmer, on March 18, 1772. In 1787, a commission appointed to survey the land of David Funk, one of Henry’s sons, reported, The commission states there came one Jacob Funck, aged 62 years, who testified that about 38 years ago he came into Conococheague with Henry Funck to buy land. They came to see the Marsh Head and other contiguous land, then owned by a certain Redmond Fallen, Ranger. They bought land and had Joseph Chapline survey it. 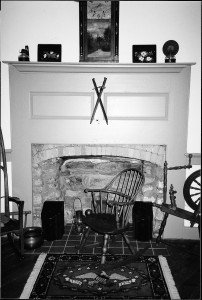 It is presumed that the house and barn were built during the Funk ownership. It is similar to an adjacent farmhouse that has a datestone of 1780 and the initials JF for Joseph Funk. However, it was known for many years as the Rench farm after Andrew Rench, who purchased the land from the Swingles and whose family held it until 1948, when Frank Artz’s father purchased it. Two years later, Frank and Sally married and moved to the farm.

The house has five bays, is built of stone finished with stucco and scribed to resemble 18 inch by 24 inch stone blocks. Wings on either end have broad, cantilevered overhangs. The west wing is built of brick with a large exterior chimney that serves a fireplace with a firebox opening about five feet tall by eight feet wide. In the back of this fireplace is an indented space with a peaked top, which the Artz’s call a warming oven. The other wing, probably the original section of the house, also has a fireplace of the same dimensions. The lower level of this wing would have been used as the cooking/living area; and a small, steep staircase accessed the loft above, which had been paneled to create a sleeping space. When the Artz’s moved into the house, they removed the little stairs as part of their kitchen reconstruction. The great fireplace remains a focal point of the room. In it, Frank Artz displays an early ten-plate stove in perfect condition. Built by the Hughes Furnace at Mont Alto, Pennsylvania, this stove sits on long, slender legs, has a firebox in its bottom section and an oven above accessed by doors on either side of the stove. The smoke from the fire is channeled from the firebox, up the far end of the stove, across the top and back to the chimney that exits just above the entrance to the firebox, thus heating the oven on three sides.

The woodwork in the house is deeply molded and similar to that in the Hager House; all rooms have chair rails. Window sashes on the first floor have nine-over-six sashes and both window and doorjambs are paneled. Most of the windows have substantial frames with pegged mortise and tenon joints. Many of the doors have hand-wrought strap hinges and large iron box locks. A few have thumb latch hardware. Most doors have six raised panels. The construction of the interior walls is unusual. On the second floor, one side of a wall has vertical wide-pine boards with beaded edges and retains the original milk paint. The other side of these boards has been plastered, making a thin, solid partition. On the first floor, the wood core is finished on both sides with a coat of clay and hair topped with plaster. Running wires and receptacles in this construction was not easy.

The house has a center hall with two rooms on either side. The two rooms on the west side have corner fireplaces built of stone with wide, arched lintels made of brick headers. The mantels are similar to one another, with a wide board above the fireplace opening and a narrow shelf, but the mantel to the rear is about six feet tall because a raised panel was inserted between the board and the shelf. The house is furnished with a handsome collection of local period furniture and with some prized early maps of the area. 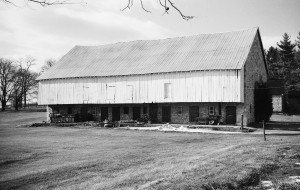 The large stone barn has vertical ventilation slits in the end walls, and near the peak of each gable is a round opening with keystones at each quadrant and finished stones around the rest of the circle. Under the forebay (the overhang), the lower level of the barn has doors opening to the stable and feed room areas. These are batten doors with long, hand-forged strap hinges holding them to the frames. Some are Dutch doors, divided so that the top half may be opened for ventilation while still keeping the stock in the barn. Inside, the original hayracks still serve, with the square posts worn smooth and round by 200 years of feeding livestock. One of the original feed troughs remains. The top board of the rail between the stables and feed room is finished with a bead on either edge. The massive hand-hewn posts and beams that carry the weight of this barn have an air of permanence and purpose about them–the epitome of beauty through function.

Yet another old stone building stands in the complex. Open at either end, it is one of the few stone wagon sheds known in the area. Beyond this structure, close to the house, is a large modern metal building which houses Frank Artz’s collection of wagons, buggies, sleighs and farm tools. A Conestoga wagon, perfectly restored is ready to once again haul freight back and forth on the National Road. Pulled by a team of six, it could be driven either from one of the team horses that was saddled, or from the lazy board, a board that could be pulled from the left side of the wagon’s center. These wagons traveled around twelve miles in a day and were the trucks of the time. 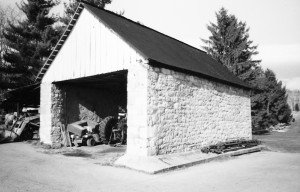 Frank and Sally Artz have loved and cared for and enjoyed their historic farm for 40 years. Frank hopes that a local museum will be able to display his collection of tools and wagons so that other generations will be able to see and appreciate the skills and resourcefulness of our forebears. Still collecting and learning, the Artzes want to hear from anyone who has information about their farm and its early owners, the Funks and the Renches.

Epilogue: The Artzes have moved an 18th century log cabin from an area east of the house to a spot near the garages and have restored it. They are active supporters of the Agricultural Museum and have contributed to that collection of antique farm machinery.

Epilogue 2015: Frank Artz passed away in June of 2009 at age 82. He was an excellent steward of Glendale for over 60 years. Today his sons continue the tradition and the farm remains in the family.

This article appeared in the Herald-Mail Sunday, February 3, 1991 as the 20th in the series.