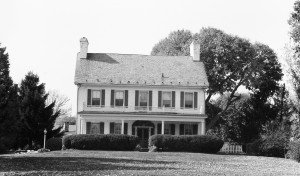 Halfway between Hagerstown and Funkstown along Frederick Street, Ravenswood Drive turns west and heads for an elegant five-bay home that is settled in a curve of the road. Surrounded by tract houses of middle years, this two-and-a-half story, white-painted brick building with a broad veranda is the early house that was built on an 18th century land grant. 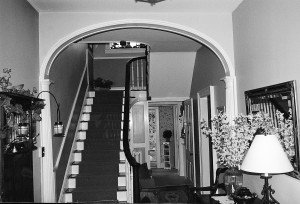 When Hagerstown was first being settled, John Stull was a large property owner and was active in organizing Washington County. His daughter Margaret married Peter White, and it was to him that a land grant for 370 acres, named End of Strife, was given in 1755. Peter White’s daughter Sara married John Wagoner; and Peter’s 1784 will indicates that she had been given a five acre parcel of this tract situated on the west side of the road. The will also gave her a cow and a female slave. By 1797 John Wagoner had purchased the remainder of End of Strife from his wife’s mother and brother. John Wagoner was a wealthy landholder who served Washington County as sheriff in 1799-1800. It is likely that the Wagoners built the home during this period.

John Wagoner died in 1831 and willed the 30 acre “Plantation” to his daughter’s husband John Kennedy. Kennedy had immigrated from Ireland and become wealthy in Hagerstown. In 1847 the property passed to his son John W. Kennedy and in 1854 it was sold to Jonathan Hager, miller, no direct relation to the founder of Hagerstown. At this time the deed notes that this land is part of the Resurvey of End of Strife and of The Establishment. Jonathan Hager left this land in trust for his son William and in 1887, 140 acres were sold to Davies L. and Anna T. Kenly. By this time the farm was known as Ravenswood. 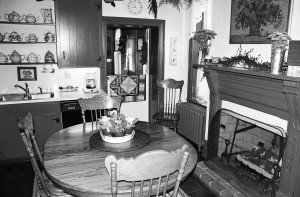 Mr. Kenly was a nephew of Major General J. R. Kenly of Baltimore, who had served under General Meade in the Civil War. Probably around the turn of this century, the Kenlys removed a front gable from the house and added the wide veranda. They also made the windows beneath the veranda extend to the floor to admit more light to these now shaded front rooms. About 1920, a two room, two-story wing was added on the back of the house to serve as a kitchen and living quarters for the cook. The upper room was accessed by a steep set of stairs in the kitchen and could not be entered from the rest of the second story. After Anna Kenly’s death in 1934, the property, now known as Ravenswood Farm, passed to her children, and at this point the process of dividing the land into house lots seems to have begun.

In 1949 the house and sixteen and six-tenths acres of land was sold by the Kenly heirs with development restrictions noted. The house now sits on about an acre of nicely landscaped ground and is owned by Robert and Rosa Lee Willis. The original section of the house is built on the classic center hall plan with two large rooms on either side of the broad hall. The front entrance is a double door with raised moldings, a wide fanlight and divided sidelights. The center hall is bisected by an elliptical arch with reeded pilasters and has a broad staircase with a curved rail at the far end. Most of the rooms in the house have the original pine plank floors, and each has a fireplace. The two rooms on the right appear to have been used as a double parlor at one time. The broad archway has been filled in and replaced with a door of ordinary scale, but the mantels in both rooms match, each with a pierced floral design in the verticals. Door and window jambs are finished with raised panels.

The second floor follows the same plan as the first. At the end of the hall, over the porch, is a jib window. The wall underneath is paneled and hinged so that it will open, and the window can be used as a door to access the railed porch roof. This forward end of the hall has now been made into a bath. The upper hall also has a central elliptical arch with pilasters, and each of the four bedrooms has a fireplace. Three of the mantels are original and are hand-carved. One has the edges of the moldings on one side so rounded that it looks almost as if half the mantel had melted. Rosa Lee Willis suspects that it may have caught fire at one time. A door has been cut through to the cook’s room so that that bedroom can be accessed from the main area of the house as well as the back stairs

The Willises collect antiques, and the home is furnished with a lovely assortment of country primitives, some with their original paint. The walls are painted off-white, and the woodwork is dark hues of terra cotta, blue or gold. Rosa Lee has added to the charm of the home by stenciling many of the walls, picking up the colors of the woodwork or the furnishings in the room. Collections of handmade baskets, handmade antique dolls and toys are displayed throughout the home. As with most old home owners, the job isn’t finished. All the panels, which had been placed in front of the fireplace openings during some earlier remodeling, have been removed, but several need modern brickwork removed and all need the flues lined. For now, they serve as comely spaces to display crafts and collections, not for fires. The floor in the studio, the bottom room of the addition, has a poured acrylic floor that will be removed sometime. But for now, Rosa Lee has painted it a cream color and stenciled bold patterns in terra cotta across it. It looks lovely until the restoration project can be done.

Outside, a bee skep sits among old-fashioned perennials, and the swimming pool is discreetly screened. The Willises have created a beautiful and comfortable living space in a lovely old home, and they are careful stewards of their trust.

Epilogue: Rosa Lee Willis sold Ravenswood after her husband’s death. When Jennifer and Doug Stahl and their five children purchased the home in 1999, plaster was falling, and major maintenance jobs had been neglected. They cleaned the pool so the children had a place to play and dug into the work. Ceilings have been replaced, rooms wallpapered, a tree that threatened the house was removed and the house has been painted. Ravenswood once again has caring stewards.

This article appeared in the Herald-Mail Sunday, January 6, 1991 as the 19th in the series.