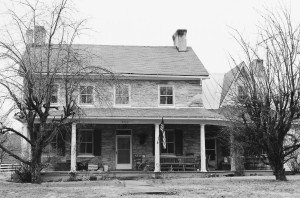 Winding through the countryside to the east of Hagerstown, Beaver Creek Church Road dips and turns. Between two narrow bridges, in a hollow nestled in a wide arc of the creek, lies Scratch Ankle Farm, an early 19th century stone house with several wings and porches. The yard is filled with a vast flock of mixed birds—several varieties of geese, ducks, chickens, guineas and peacocks are at home here. Beyond, in the pasture that stretches out from the large frame barn to the creek, are donkeys, horses, sheep and goats. All are part of the remarkable menagerie of Coulter Huyler, who, after a career in the diplomatic service, retired to this historic home and became an innkeeper. 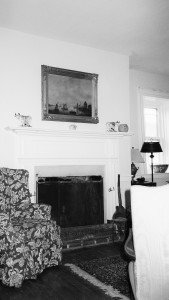 The Beaver Creek Community was first settled by Christian, Henry and Peter Newcomer, the sons of Wolfgang Newcomer, a Swiss Mennonite who had immigrated to Lancaster County, Pennsylvania. Christian became a bishop in the German Methodist Church, and Henry and Peter were farmers. Henry also owned a mill. Henry’s son John Newcomer built this house, part of the Beaver Creek Community, on land that had belonged to his father. John Newcomer was born in 1797 and became a prominent citizen in his community. In 1836, he was elected sheriff and was sent in 1840 to represent Washington County in the Senate of Maryland, where he served for six years. From 1846 to 1849 he was County Commissioner, and in 1850 he served as a member of the Constitutional Convention. Several years later he was again elected County Commissioner.

John Newcomer was a partner in a grain and flour business in Baltimore and sent his eldest son Benjamin Franklin (called B. F.) to represent his interests in that city when B. F. was just sixteen. Two years later, B. F. Newcomer purchased his father’s interest in the business and went on to become a wealthy and important merchant, a member of the Corn and Flour Exchange, director of banks and an investor in railroads. Near the intersection of the creek and the road in front of the house are the ruins of a wooden mill which burned in 1921—a reminder of the vigorous Newcomer family and their milling enterprises. 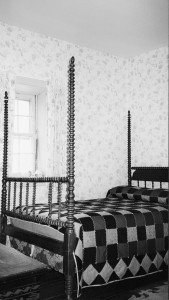 The original section of the house is adorned with a porch that extends the width of the section and wraps around to a wing. This is a late addition. When doing extensive repairs some years ago, Coulter Huyler watched a slip of paper flutter to the ground. On it was recorded, July 4, l912. We are dedicating this porch which was built in the month of June. Inside, the house is a labyrinth of rooms and levels. The floors undulate, but the walls are plumb and the building in good repair—evidence of Huyler’s massive efforts to save it from the ravages of time and neglect. There are eight bedrooms and four fireplaces, with three more fireplaces remaining boarded up behind walls. Original thumb latches and box locks grace interior doors. The house is decorated with antiques and a lifetime of mementos collected across the world. Each bed is covered with a lovely antique quilt. One of the favorite bedrooms of guests at Scratch Ankle Farm was once the summer kitchen. The walls are weathered boards, gray and unpainted. The large cooking fireplace still stands with two cranes ready—one with a huge iron kettle still hanging from it.

The far end of the living room was once closed off as a closet, and it was rumored that there was a still hidden there during prohibition. When street cars ran between Hagerstown and Frederick, the owner of the still would venture up and down the line from the nearby car stop selling his wares in mason jars. 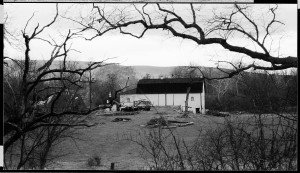 The bricks used in part of the 1854 wing were made on the property. At one time this wing was occupied by a blind couple who were first cousins. Their family moved them there in order to keep them close, but not too close. The lady of this couple still inhabits the house, Huyler believes, a friendly ghost in his charming inn.

Coulter Huyler has lived on Beaver Creek for 22 years. His is only the fourth family to dwell in John Newcomer’s home, and he named the farm after a place owned by his grandfather. Grandfather Porter was a man of eccentric habits and positive opinions who had moved to a rural community some years earlier. Neighbors, when approaching him, were ill at ease and would stare at the ground and twist one foot around the supporting ankle in a scratching motion as they spoke with the imperious Porter. Sympathetic but amused by his neighbors’ embarrassment, Grandfather Porter determined to name his farm for the wonderful people among whom he lived.

Guests come often to enjoy the solitude, the palpable history of the house, the wonderful array of birds and beasts and the charm of their urbane host.

Epilogue: Coulter Huyler died in September 1997 and the farm passed to his daughter Anne Huyler-Baker. Anne has just retired from teaching and is realizing her dream of a hands-on learning center for children and a retreat center for various groups. She will make the farm her home as well and continue to run the bed and breakfast.

This article appeared in the Herald-Mail Sunday, June 3, 1990 as the 14th in the series.