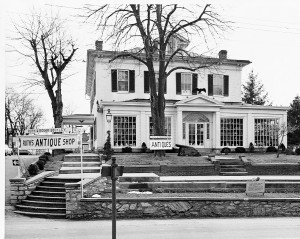 The corner of Baltimore and High Streets in Funkstown is one of the highest spots in town, and the southeast corner rises above the other three. Steps ascend from the corner to a large, two-story brick house. Three retaining walls, two of stone and one of brick, hold the soil of the steep yard. A large sign proclaims RUTH’S ANTIQUES.

The house has a low-pitched standing-seam hip roof with Palladian windows in its gable dormers. Decorative double brackets support the cornice. A one-story porch that spans the Baltimore Street façade and wraps around the west corner has been enclosed with windows and an elegant doorway with transom that were salvaged from Kee Mar College when it was torn down. The house itself has four bays. The main entrance, in the second bay from the west, has two doors with pyramidal panels and jambs with similar panels. The upper sections of these doors once had glass. They are now filled with white painted plywood. Above is an elegant transom with clear, beveled glass held in curvilinear muntins. The other three bays have floor-length windows with six-over-six sashes. Windows and doors have flared lintels made of soldier bricks. A porte-cochere shelters the High Street entrance on the east. Here, two semicircular marble steps lead to the door.

A brick wing extends parallel to High Street, and a collection of newer structures and additions fills most of the area behind the house. Among these is a small brick building with a clip-cornered frame addition that is variously called the summer kitchen, the wash house or the slave quarters. This small building has a single room on the first floor with a large fireplace on the wall opposite the door. A simple built-in cupboard stands beside the fireplace on the left, and winder stairs on the right lead to the loft above.

In 1832, Elias Chaney, a farmer, purchased two parcels of land from Frederick Koehler. He bought …thirty acres of ground on the right of the road leading from Jerusalem Town in Washington County to Gerard Stonebrakers fence… for $950; and he paid $550 for lot number 177 and the eastern half of lot number 176 in the same town. This deed included …all the houses buildings profits advantages and appurtenances to the said Lott. It further stated that the new owner shall be …yielding and paying therefore yearly forever annually on the twenty-ninth day of September to the Proprietor of said Town the sum of one dollar current money. The deed describes lot number 177 as set back from the street 31 feet. The town square was planned for this intersection, and each of the corner lots had setbacks to accommodate the square.

This early deed does not refer to the large brick dwelling house mentioned in later deeds. This evidence combined with the architectural style of the building indicates Chaney must have built the house. However, he might have saved some of the existing structures when he did. A brick in the wall beside the High Street door is scribed with the date 1847, and this may indicate the year of construction.

Elias Chaney died in 1859, leaving his estate to his wife Sarah until she died, then transferring it to his three sons Joseph, Edward, Elias and his daughter Clorinda Fleming. However, Clorinda, like her mother, was to inherit her share …during her natural life; and at her death the same to go to and vest in her children and their heirs forever.

Chaney’s will allowed his wife to choose two of his servants to be hers for her lifetime. The will also said, …none of my said servants are to be sold in the course of the Administration of my said estate, it not being intended however that my said children shall be restricted after the division of said servants. Apparently Chaney did not like to refer to these servants as slaves; but the appraisal of his estate, now part of the court record, leaves no doubt. Scattered among notations of linen towels and wheelbarrows were the names of six men and eight women. George Brisco was valued at $900, Abram Brisco only five dollars. Female slave & child Serina Stewart were worth $525, while Matilda Dorrey and child were tallied at $210. Sam’l was listed at $450, Sally at $550, and Big George the mule slave at $650. There is no way to know what happened to these poor people, but the callousness of the record breathes vivid life into this dry account. Chaney’s entire estate was worth $8,422.45. The worth of the slaves made up almost 62 percent of this amount.

Chaney House is said to have been a hospital during the Civil War, and Dr. Chaney is mentioned. Joseph Penn Chaney, Elias’s son, was a physician and he may have been this doctor. Clorinda Fleming’s husband was also a physician.

In 1863 Elias Chaney’s heirs, Sarah Chaney, Clorinda Fleming and her brothers, sold the house to Henry Newcomer, who conveyed it to Victor H. Newcomer in 1867. The property passed to Victor’s widow Anne and then in 1904 to their children Frank S. Newcomer and Virginia Nicodemus. In 1905 Virginia conveyed her half of the property to her brother.

Clorinda Chaney Fleming died in 1910, survived by seven children. Two years later, 49 years after the family had sold the property, these seven offspring sued Frank Newcomer for a quarter share of the Chaney House, based upon their grandfather’s will, which gave their mother a life estate and then passed her undivided quarter share on to them. Newcomer countered that he had made $4,000 in improvements to the property, although he never specified what these improvements were. Eventually the parties agreed to have the court sell the house and divide the proceeds. In 1915 Edward E. Fleming, one of Clorinda’s sons, purchased his grandfather’s house at this sale for $4,070. Frank Newcomer received $2,859.02 and each of the Fleming heirs a little more than $136. Oddly enough, no mention was made of the money Sarah Chaney or Clorinda had received as their shares at the time of the sale over 50 years before.

Edward Fleming sold the house the next year to Joseph C. Weissner. The listed price of ten dollars suggests Weissner had some personal relationship to Fleming. Mary V. Weissner inherited the house from her husband in 1929. She mortgaged the house for $5,000 in 1936 and lost it to foreclosure in 1940. The same year, Roger D. and Mildred R. Beckley purchased the property for $4,300 from the assignee of the mortgage. The Beckleys had opened an antiques business in Funkstown in 1936. Then in 1940, they moved it, and the Chaney house became both their home and their business.

The entrance facing Baltimore Street opens into the porch that Roger Beckley enclosed for more space. Opposite this door is the entrance to the house. This pair of double doors opens into a large room the width of the house. Woodwork is deeply molded with turned corner blocks. Fireplaces with identical mantels are centered on the east and west walls. Hearths and firebox surrounds are covered in long, narrow tiles glazed a rich, mottled green. At one time, a pair of large pocket doors divided the east half of this space from the rest. Roger Beckley removed these doors to accommodate a larger show area.

The High Street entrance opens into a corridor running behind this large space and across the width of the house. In the middle of this hall, columns support an elliptical arch; and chair rail trims the walls. The transom above this arch is filled with art glass held in curved muntins. At the west end of the hall is a stairway. The balusters are simple, round and tapered. The round handrail ends in a volute. Two doors on the north side of this hall open into the large front space. Doors on the south side open into what were once the Beckley’s living quarters and into another show room on the west. A closet built against this hall wall hides yet another fireplace. The kitchen of this apartment has its stove resting in the five foot high by five-and-a-half foot wide cooking fireplace.

Upstairs, another three-room rental unit spans the north side of the house above the large showroom. The broad arch with two side openings has been filled in. A modern door has been built into the space. It is not clear what this dramatic entrance once announced. A fireplace centers on the east wall of the end room. Woodwork is simpler with plain corner blocks.

Several rooms on the south side of the upstairs hall were part of the Beckley’s apartment. Rectangular transoms top the doors, and a sleeping porch has been enclosed. One of the windows has scratched in it Jane E. Clark and Sarah Chaney-1850.

Stairs in the smaller show room lead to the cellar. To the right of the stairs is a bomb shelter, an addition Roger Beckley made in the 1950s. Glass jugs of water, remnants of that earlier time, still line the steps. The rest of the cellar is filled with workspaces.

Chaney House has grown and changed over time. If Frank Newcomer actually invested $4,000 in the house between 1904 and 1912, he must have made vast changes; for that was almost as much as the house sold for in 1916. After the Beckleys purchased the house, they made many changes: adding wings, rearranging walls and enclosing elements to make the space fit their needs.

The Beckleys turned the antique store over to their daughter Carol Engstrom in 1980. She has now decided to close the business and sell the house to Gregory and Vicki Sullivan of Hudson House Galleries, also long-standing antiques dealers in Funkstown. They plan to use the Chaney House and its large, fundamentally period architectural spaces to better show their antiques, decorative arts and antique reproductions.  Greg and Vicki believe the spacious rooms, high ceilings and architectural details will enhance their inventory. The Sullivans may eventually make this their home. They want to remove many of the accretions and restore the house. Greg even has a lead on the pocket doors and hopes to put them back.