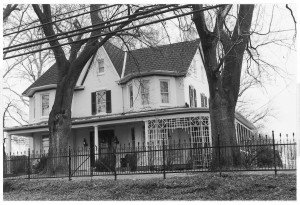 Beaver Creek Road is an ancient route, part of the early 18th century trail labeled …the Great Waggon Road to Philadelphia on Fry’s 1751 map of our area. This was the path generations of immigrants followed from the port city to the lands they would settle in the Cumberland and Shenandoah Valleys. Toward the end of the 18th century, a community developed along the Waggon Road near the stream. Generations of Newcomers, Funks and Doubs lived here, intermarried, farmed and built sturdy homes and mills. The community grew over the centuries but was never large. In 1936, a new Route 40 was begun. This road would cross South Mountain at Orrs Gap as the Waggon Road had and would replace the National Pike by becoming the main highway between Frederick and Hagerstown. This new road roughly followed the trolley line that ran between Hagerstown and Myersville from 1902 to 1938. It ran just to the south of the Beaver Creek community, allowing the small village to remain virtually unchanged.

Near the road just to the west of Beaver Creek stands an imposing brick house. A delicate iron fence and grand old trees surround and shade it, creating a quiet enclave set off to itself beside the public way. This is Beaver Creek House, built by Martin Newcomer in 1905. Newcomer was a landowner and a farmer, one of that family which had settled the community in the 18th century. In his middle years, Newcomer built this fine, new home for himself at the edge of his farm. He chose a Gothic Revival type, with its dominant central cross gable, which had been popular here for some 50 years; but he added elements from other architectural styles as well. Gingerbread trim so often associated with Gothic Revival was omitted. The result is a charming vernacular home.

Just four families have owned the house. In 1932 the mortgage held by Bettie Newcomer, Martin’s widow, was foreclosed; and two physicians Gifford and Evelyn Luke purchased the home. Another doctor Edgar Thrall Campbell and his wife bought the place in 1947. This was their home until 1988 when Donald and Shirley Day bought it from Marjorie Campbell after her husband’s death. 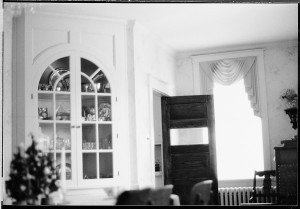 The house is painted white with two-story bay windows flanking the central door. A one-story porch, supported by simple columns, wraps around the building. Rough-textured stone sills and lintels finish window and door openings. Sidelights and a transom surround the front door that opens into the entry hall. The staircase on the right side of the hall has a square newel post and turned balusters rising to the second floor.

An ample sitting room to the left opens into a small office at the back through a pair of double doors. These doors have early hardware and appear to be original. The back wall of the office is filled with arched-top bookcases, a later addition, for earlier residents tell of the pool table that once occupied this small space.

The parlor to the right of the hall has the main house’s only fireplace centered on the gable wall. A door to the right of the fireplace opens onto the screened section of the porch, and an archway at the rear of the room opens into a small desk alcove that was once a pantry. The Campbells added a new window here and closed the original door to the dining room at the back of the parlor so that the dining room is now entered through the alcove. This long, narrow room has two built-in corner cupboards, also added by the Campbells.

The kitchen is beside the dining room in the wing at the rear of the house, and it is entered both from the back of the dining room as well as through a butler’s pantry beside the office at the end of the sitting room. The original kitchen was small and had four entrances, including one to the back stairs. These doors limited the useful space in the room. The Campbells extended the kitchen, more than tripling its size. More counter space and an island were added, as were two more sinks, a skylight and an indoor barbeque.

The German-sided summer kitchen was joined to the main body of the home and, with its original brick fireplace, became a small family room. Another room and bath were added, as was a porte-cochere that shelters the new side entrance into the kitchen.

A large brick patio surrounds an elegant, antique fountain at the back of the house. Gardens of perennials and boxwood edge the house and extend east past the small red barn with its two cupolas. Tall old trees shade a small fishpond, completing the tranquil scene.

Donald and Shirley Day grew up in Hagerstown, attended the University of Maryland and stayed in the Washington, D.C., area after graduation. When retirement came, they settled on a bed and breakfast as something to do, a way to bring new people into their lives. This, they thought, would be fun. But the most compelling reason to have a bed and breakfast was to keep and display the many antiques that they had inherited. The Campbell’s house was perfect for them. Few structural changes were needed. They replaced the barbeque in the kitchen with a small woodstove and added a bay window. Central air conditioning was installed, and bathrooms were added; but the rest of the house remains as it was.

While the house was structurally sound, many weeks were spent papering and painting and decorating every room. The small room at the back of the kitchen and four of the five bedrooms on the second floor became guest rooms. The master bedroom at the back of the second floor, over the kitchen, has a sleeping porch on the east. This porch is enclosed with wood casement windows and is now a private space where the Days come to relax.

The family antiques filled the house, and only a few pieces had to be purchased to completely furnish all the rooms. Shirley’s favorite piece is the 1780 tall case clock that her father bought at auction in Sharpsburg many years ago. In the back of the case are bullet holes said to be from the Battle of Antietam. The bed and breakfast has worked well for the Days. There is little profit, but they enjoy meeting new people and sharing their home and their family stories.

Epilogue: Don and Shirley Day closed the bed and breakfast on the last day of the year 2000 and are now enjoying their home as a home without all the wonderful guests who used to visit. They have more time for projects in their gardens and for travel.

This article appeared in the Herald-Mail Sunday, December 5, 1999 as the 122nd in the series.