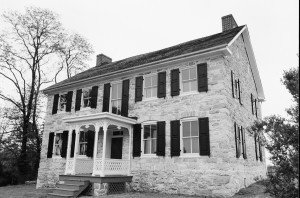 The stone house sits well back from Downsville Pike down a curved gravel lane, beyond a metal farm gate and surrounded by corn fields and pasture. A new exit from Interstate 70 will soon bring traffic by the old house, and new businesses will be springing up along the route. The area will change rapidly. 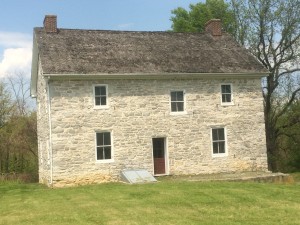 The house faces northwest and has five bays with a central entrance sheltered by a one-story porch. The entrance is broad and has a double door, each with two raised panels. Above is a two-light transom. On this façade, the first floor openings have segmental arches; and another arch, now filled in, appears at ground level, showing there once was a window into the cellar at that place. The central opening on the second level is a floor-length window that may have been a door at one time. A simple water table defines the foundation on both this façade and the southwest elevation. A date stone in the opposite (northeast) gable is inscribed J. F. 1780; and all openings on this face, except the two small attic windows, have segmental arches above them. 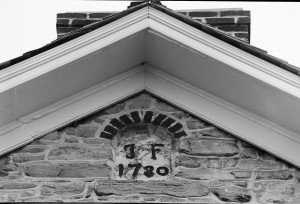 There are four rooms on the first floor, with the main entrance opening into the largest of these. A hall separates the two rooms at the back of the house, and leads from a door into the large front room to the back door of the house. The stairs rise gently to the second floor from this hall. Balusters are turned and quite short, with the balustrade only about twenty inches high. The spandrel beneath the stairs has raised panels. A door to the cellar opens beneath these stairs. Originally there was also a door opposite this one that gave access to the cellar stairs from the southeast room, the kitchen at one time. Corner fireplaces with matching mantels and tall firebox openings dominate the large room and the room behind it. Fireplaces do not appear to have been present in the other two rooms on the first level, but chimneys in these areas would have accommodated stoves. Upstairs two more corner fireplaces furnish the front bedrooms. These have no mantels, and the walls are plastered to the arched lintel above each firebox. These fireboxes have stepped-back shoulders on either side.

The partial cellar has two entrances: the inner stairs, and a bulkhead at the rear of the building. This entrance itself is probably original but the door once was wider. The ceiling reveals close-set beams, logs that have been flattened on the upper and lower sides, with stones and clay filling the spaces between as insulation. A great, triangular stone mass on the gable end supports the corner fireplaces above it. One side of this mass has a tall, narrow arch and the other a cubby. There are several other cubbies in the cellar walls. The ceiling insulation and the diagonal fireplaces are typical features of 18th century architecture in this area.

Brothers Jacob and Henry Funck [sic] came to this area in 1749 to purchase land. Henry’s son Joseph received part of his father’s Marsh Head land grant in 1779. Apparently Joseph built this stone house the following year. A few years later, Joseph traded homes with his brother John, who was a minister in the nearby Marsh Church, so that each brother could be closer to his work. Thus, in 1785 John Funk received a deed to a 145 and 1/4 acre parcel of land from Joseph Funk. This parcel contained parts of eight different land patents including Marsh Head and Resurvey on Marsh Head, and the deed included …all houses, buildings and Improvements. On October 28, 1796, John Funk patented 147 and 3/8 acres as David’s Friendship, probably the same land he had received from Joseph Funk eleven years earlier. 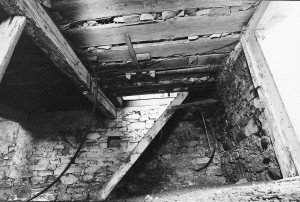 Potomac Edison purchased this home and its 147 plus acres in 1960. The deed stated that the parcel was part of land patented as David’s Friendship. For the next quarter century, the land was rented as a farm, with the farm family living in the house. In the late 1980s a woman from an historical society contacted the company with her concern that the house was deteriorating. Spurred by this visit, the company took a closer look at the property.

Mike Eckard is Director of Customer Affairs and Marketing for Allegheny Power Corporation. He has had a very close relationship with David’s Friendship for many years. Once he learned of the home’s historical significance, it was decided to shore the building up. Mike is in charge of putting together the new Technology Park for the company, and he felt that David’s Friendship would be a fine keystone for this park. “It would set the tone of the park”, he said, “So we’ve always had it in our plans for the development of the park. There are other parks near the Baltimore/Washington area that have integrated historic structures into the theme of the park; so the company decided to conserve it and use it. A corporate decision was made not to destroy the house because it has a lot of historical significance, and we think it can fit very well into the park.”

Architects came, evaluated the building and found its structural integrity intact. The stone was repointed, the chimney reinforced and the roof was replaced with historically accurate cedar shakes. Shutters were replaced and the porch was restored. The windows were repaired using drawings and old photographs of the building and storm windows added. All work was done under the supervision of an architectural historian. The windows have two-over-two sashes dating from an early renovation of the house and are part of the development of the building over time. 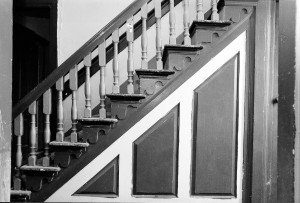 David’s Friendship has been stabilized and secured. The interior has been cleaned. “If we restore it, how do we use it, as the park’s office? Offer it for meetings and events for tenants of the business park? We decided to wait and see how the park develops before pursuing our options,” says Mike. Midge Teahan, General Manager of Corporate Communications, adds, “Since our corporate headquarters is located here in Washington County, there is a tremendous sensitivity to and appreciation for the historical significance of the area, which is very special and unique. When you think of Washington County, of the historical relevance of it and that David’s Friendship is built of native stone out of the fields,” says Mike, “this is something precious; and we’re going to keep it and use it to set the theme of the park. It has always been our intention to build it into the park. I’m not sure what the ultimate use is going to be; we’ll discuss that with the business partner with whom we develop the park; but I can tell you this, it is going to be a central part of the park. It’s going to be the entrance to Phase One of the park.”

Allegheny Power is searching for a private developer who will develop Friendship Technology Park with protective covenants and strict architectural standards that set the tone. Midge says, “We are very sensitive to the need for good jobs coming into the county. We want to provide something that is not in Washington County, similar to some of the better ones you see around Frederick and Baltimore and Washington. We want a low-density campus environment with a lot of amenities—the kind of environment that employees in high quality companies demand, with a lot of green areas and a lot of walking trails; and the house fits in really, really, really well with that. We live there, and it’s our corporate headquarters, and we won’t accept a low quality development. Allegheny Power takes its corporate citizenship very seriously, and we recognize the value of being a partner in community endeavors and in endeavors that enhance the quality of life in the community. This park will do that, certainly. Preserving something that has the historical significance of David’s Friendship protects a certain quality of life in this area.”

Mike adds, “We will not short-circuit quality for a quick buck.” This corporation has had the vision to see this old farmhouse as the development tool that it is. Four-and-one-tenth acres have been laid out around the house to give it space within the new center. When the purpose of the building is decided, it will be restored and adaptively reused. A treasure has been saved.

2015 Epilogue: David’s Friendship was acquired by the Fulton family of Hagerstown, MD.  While seeking a tenant, they have been good stewards of the property. This 18th century stone home is located at the Downsville Pike exit off Interstate 70 yet it is situated behind large trees and shrubbery. What an ideal site for a Bed & Breakfast – convenient to the interstate, yet retaining the rural flavor of our county. This house needs a job!