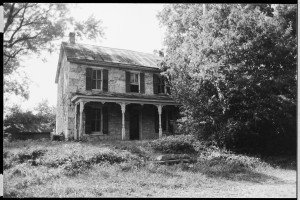 The Foultz House sits on a bluff at the end of a long gravel lane a short distance from the interchange of Route 66 and Interstate 70. A sturdy concrete bridge carries the lane across Beaver Creek where the creek runs parallel to Route 66. The long lane and surrounding fields present a feeling of rural seclusion, despite the easy access to the highway and nearby Hagerstown. The Foultz House property is owned by Maryland’s Department of Natural Resources, (DNR) and is actually part of and adjacent to the Albert M. Powell Fish Hatchery.

In 1795, John Foultz purchased a 196 acre tract of land from Joseph Odler for £1,078. This parcel contained parts of land patents named Resurvey on Wallings Luck, Resurvey on the Adventure, and Convention. In 1849, two of John Foultz’s heirs sold their shares to a third, Henry Foltz, and the property remained in the family until the end of the century. Clifford Houpt and Bertie Martz bought their sister’s share of the property in 1937, and it remained in that family until 1975, when Golda and Merle Martz sold the property to DNR, while retaining a life estate. Golda Martz died a few years ago, and the house has been empty since. 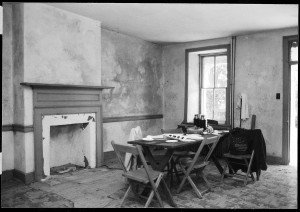 The house sits atop the cavern of the largest spring in the county, the source of water for the fish hatchery. The house is built of stone with quoined corners and was probably constructed between 1820 and 1835. A Victorian porch and two-over-two windows were added during a later renovation, but most of the interior finishes are original to the house. The front entrance is in the middle of three bays. The doorjamb is paneled in wood and topped by a three-light transom with original glass. Two rooms separated by an enclosed staircase to the second floor fill the main block of the house. The room on the south has a fireplace with an early mantel. Both rooms have chair rail, baseboards and narrow board floors under layers of linoleum. Several doors in the house are finished with painted wood graining.

The two-story rear ell of the Foultz House has two rooms on the first floor, a dining room to the east and a kitchen to the west, rooms that evolved over several building periods. The dining room’s north and west walls are a stone continuation of the main house. A small fireplace is located in the west wall.

At least part of the kitchen’s west wall is of log construction. The kitchen is the only part of the house that is underpinned by a cellar. This section may be a rebuilt log structure that predates the rest of the house. The south wall of the ell, sheltered by a porch, is wood frame construction. It appears that the ell was raised to two stories, in frame construction, later in the 19th century. A cinder block utility porch has been added to the north.

Upstairs four ample rooms have large windows and good light. The southwest chamber’s west wall has the only original six-over-six sash window remaining in the house. A set of stairs leads to the attic, which is unfinished. The tin roof, supported by pegged rafters, appears to be in fair condition.

A number of outbuildings surround the home. There is a frame bank barn with an unusual semicircular stone corral wall, a summer kitchen with service fireplace and original cranes, a two-room frame chicken house, and a timber frame wagon shed with a corn crib on one side. All of these buildings need work, but most are salvageable.

The Department of Natural Resources is the largest landowner in Maryland (over 370,000 acres) and is mandated to protect our streams and forests, raise fish and provide recreation areas. Sometimes, in acquiring land for these purposes, DNR becomes the owner of historically significant properties – by acquiring land, they become owners of buildings. For decades DNR ignored many of these properties because no funds were available to support them. They would rent a building to someone until the structure became unusable from lack of maintenance and then let the place collapse through benign neglect. Needless to say, this management practice drew criticism, so in 1982, the first curatorship was created. Private individuals contract with DNR to restore a property at their own expense in return for the right to use that property. Not a bad deal: no mortgage, no rent, no property taxes in return for the restoration work they provide. Ross Kimmel, Supervisor of Cultural Resources Management for the State Forest and Park Service of DNR, coordinates the curatorship program.

The Foultz house was offered for curatorship in 1998, but no curator was found. Although most historic houses in the curatorship program are used as residences, the Foultz House presented some difficulties. Its proximity to the fish hatchery caused particularly demanding environmental restrictions on the use of the site; activities normally associated with ordinary residential life could be damaging to the large spring that supplies the hatchery with all of its water.

Epilogue: In mid-2001, the house, barn, outbuildings and ten acres were acquired through the curatorship program by local horticulturist and landscape designer Don Brinser who plans to establish Beaver Creek Resource Center. BCRC’s goals include the creation of research and education facilities for the preservation of native plants, regional history and culture–all within the parameters of environmental protection and historic preservation. The restored house will be used for offices and meeting facilities. Planning includes environmentally responsible technologies to power all operations on the site, resulting in true adaptive reuse of this historic structure.