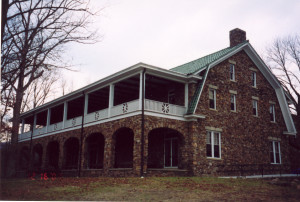 In 1995, Woodmont was sold to the Maryland Department of Natural Resources (DNR) in a unique partnership with the Isaac Walton League. The League formed a Woodmont chapter to manage activities at the facility from October 1st to March 31st each year, when the League has exclusive use of 1,200 acres. This area includes the lodge, Camp Cleveland, the lakes, and the game farm. In turn, these League activities provide funds for maintaining Woodmont and continuing its conservation activities. The entire facility is open to the public from April 1st until the end of September with programs provided by DNR.

Southwest of Hancock at the foot of Sideling Hill near an elbow of the Potomac, lie 3,500 acres of virgin woodland owned by a group of sportsmen –The Woodmont Rod and Gun Club. Long before the federal government saw the need to preserve our undeveloped lands in parks and forests, Woodmont was formed to give a group of Washington leaders a place near the city where they could relax, hunt, and fish. Here, some of the first efforts at conservation and wildlife management were initiated.

As the Civil War began to rage, sixteen-year-old Robert Lee Hill left Virginia and the turmoil that engulfed the aristocrats of the South to find peace in the mountains. He finally settled on Sideling Hill west of Hancock, Maryland, where he lived the life of a mountain man and married a local girl. In 1870, he traveled to Washington, D.C., and, while riding on a streetcar, happened to sit next to Rear Admiral Robley Evans, also a native of Virginia and a graduate of the United States Military Academy. For some reason these two very different men struck up a conversation and found a common chord in their love of hunting and fishing. Hill invited Evans to visit him at Sideling Hill to enjoy the abundant game of the area.

Surprisingly, Evans and several companions accepted the invitation that fall and returned to Washington laden with venison and wild turkey that they had shot and stories of this sportsman’s paradise less than a hundred miles from the city. Evans gave a stag dinner for his friends at which he served the game brought back from western Maryland, and that night a group of the diners decided to purchase some of this rich game land and form The Woodmont Rod and Gun Club of Washington, D.C. These wealthy and influential men purchased 3,500 acres of wilderness and used a ramshackle 140-year-old log home as a clubhouse until a new one could be constructed in 1872. 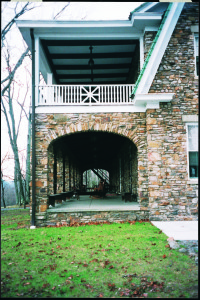 Woodmont continued to be a retreat for powerful men of Washington until 1903 when the clubhouse and all its records burned. All that survived were a few pictures and the rustic “President’s Chair,” handmade by one of the guides at the club for the use of the President of the United States when he visited. (By that time, four presidents, Garfield, Arthur, Harrison and Cleveland had been guests at the club.) The membership was so divided by this devastating fire that they could not agree on a replacement for the clubhouse and finally decided to sell the land.

Henry Bridges was born in Hancock in 1878, the son of a prosperous businessman. He became a lawyer and wealthy businessman himself. Henry Bridges had created a zoo on the edge of Hancock when he was thirteen years old, and his interest in the wilderness continued throughout his life. When he heard that Woodmont was for sale, Bridges organized a group of wealthy sportsmen friends, and they were able to purchase the land in 1908. The club became The Woodmont Rod and Gun Club of Baltimore City, and Henry Bridges became the secretary-treasurer, a job he was to hold for the rest of his life.

In its first year, the new club built a frame clubhouse under Bridges’ direction. In 1930, this building was replaced by the massive three-story fieldstone structure still in use today. Except for the green roof tiles, all the materials for this building came from Woodmont. Massive beams, wood paneling and floors and huge stone fireplaces form an appropriate background for the more than 600 game trophies displayed around the building. Great leather chairs, bear skin rugs and photographs of famous guests and members fill the 40-foot-square great rooms on the first floor. Upstairs are bedrooms for the members to use during their visits, and, next to the dining room, a kitchen to prepare the meals for all. Often game from the preserve is on the menu.

The old frame clubhouse became the center for the turkey breeding operation initiated by Henry Bridges. Concerned by the rarity of wild turkey which had been so plentiful in his youth, and aware that the passenger pigeon had become extinct less than 60 years after a conservation committee had declared in 1857 that it needed no protection, Bridges started the first wild turkey breeding operation. Wild turkeys were difficult to trap and nests nearly impossible to find, but Bridges persevered, sometimes paying as much as $100 for a gobbler. He then had to discover how to care for these wily birds, how to get them to mate and how to raise them with their wild instincts intact. The Woodmont program has been a great success, and Bridges felt it saved the turkey from extinction. Thousands of these Woodmont turkeys have been sold to parks and game preserves around the country to restock lands that no longer had this once plentiful bird. 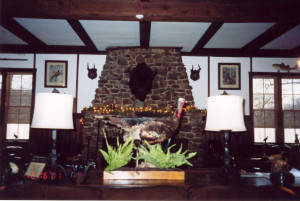 Bridges imported large whitetail deer from Michigan to breed with the smaller Virginia whitetail deer, producing a large Woodmont variety which stayed primarily within the confines of the preserve because of a nine-foot-high fence erected around thousands of acres of forest. When the pollution in the Potomac River began to adversely affect the fishing there, Woodmont, under Bridges’ direction, built two lakes and stocked them with bass and trout. Woodmont members also hunted ducks and other waterfowl that inhabited the lakes.

When Henry Bridges died in 1957, the responsibility of managing Woodmont fell to E. T. Andrews, a major shareholder in the nonprofit corporation. Since that time, the breeding programs have been continued and expanded, with the guidance of a consulting game biologist, to include several varieties of pheasant. A forest management program has been put into place with the aid of professional foresters. Major repairs and restoration have been undertaken during the last several years, maintaining the Clubhouse and other facilities in keeping with the original architecture and decor.

In 1986, the grandson and namesake of the sixth president of Woodmont, Henry Roemer, became actively involved as resident manager of the Club. Fifty-six members, many of them sons and grandsons of original members, fill the Club with family and friends throughout the hunting season. They continue the tradition of sports and conservation begun so many years ago. Henry Bridges’ grandson David visits frequently, absorbing the spirit of the grandfather who died before he was born, getting to know this family and himself at Woodmont.