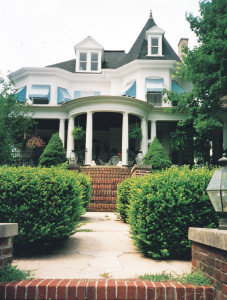 The grand homes along Oak Hill are set well back from the street on a ridge that parallels it. A broad lawn sweeps to a gentle terrace and brick stairs as the walk leads to number 635. The house has white-painted brick with a steeply roofed hexagonal tower on its right and a similar but flat roofed appendage set back on the left. This asymmetric late Victorian structure, with its hip roofs and gabled dormers, stands behind a later Neoclassical wraparound porch with a semicircular entrance and 23 fluted columns with Ionic capitals. 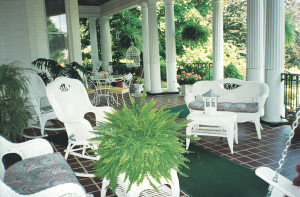 The porch is set on brick foundations with a tile floor laid in concrete. The house is laid in common bond brick on stone foundations. Windows have arched soldier brick lintels with single-pane sashes, and the main entrance has a wide, leaded-glass fanlight with sidelights surrounding a six-panel door. This door opens into an elegant reception room with a curved staircase to the left and a curved, reproduction desk nestled at its base. The stairs’ handrail is supported by delicate balusters and ends in a volute. This stairway is not original to the house, but was probably added at the same time as the porch. 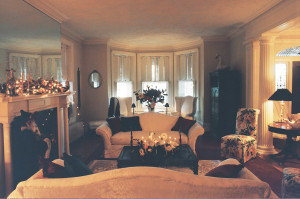 To the right of the reception room, through a broad, columned archway, is the living room with its three-windowed bay and fireplace. The white-painted mantel is simple with round columns on either side setting off the hunter green marble surround and hearth. Beyond the living room, through another archway, is the dining room. A hall leads from the entry past these rooms to the kitchen, and there is an elegant bedroom suite on the other side of this hall behind curtained French doors. This suite is painted bright white with dark green accents, and has a fireplace, a four poster bed and a private bath.

At the head of the stairs is a light-filled office; and beyond are five bedrooms, all beautifully furnished in reproduction period furniture.

An 1891 map of Hagerstown shows a large parcel of land west of Potomac Avenue, where it doglegs from Potomac Street. In the center of this parcel, on the crest of the ridge, is the footprint of a masonry building. There is no Oak Hill Avenue south of the railroad, and there is no Maple Avenue yet. This property was owned by Frederick C. McComas, who had purchased it in 1868. Late in the century, McComas planned to subdivide his land; and in 1892 he sold the first lot that fronted on a street not yet built, a northern extension of Potomac Street. 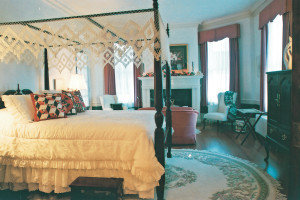 In 1896, after McComas’s 1895 death, his executors sold another lot to Caroline F. Barnett for $2,000. Her deed describes a 55 foot front line along the same planned street and grants access across another lot to Potomac Avenue until such time as the street is built. It mentions no improvements, and restricts construction to the ridge, in line with the building shown on the 1891 map. 1906 documents in McComas’s estate mention Carrie Barnett’s home, indicating that the home had been built, probably soon after she purchased the lot. The 1908 plat names the new road Potomac Street, but it eventually became the 600 and 700 blocks of Oak Hill Avenue.

Carrie’s husband, B. Lee Barnett, died in 1905, but she remained in the home until 1925, when it was sold to Claggett and Daisy Cost Miller. The Millers kept the home until September 28, 1953, after which it changed hands several times. 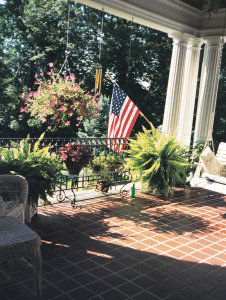 In 1981 Heidi Clothing, a dry cleaning company, purchased the house for $75,000, intending to make it their corporate headquarters. Eventually Heidi defaulted on the loan, and Ed Button purchased the property just before it was to be auctioned. He established his law offices there, and 635 remained legal offices until this year. Terry Myers, one of the lawyers working there, mused about the bridge–a second story walkway attaching legal offices in 635 with others in 639 “..cost us $30,000 to put up and $15,000 to take down..” he lamented. Changes among the various legal partners led to the building being sold again.

Winnie Price is a bundle of energy who has been in the hotel and service industry for most of her life. She had just sold a large bed and breakfast in Gettysburg, Pennsylvania, and was looking for something else. She has always liked Hagerstown, so she looked here. The house on Oak Hill seemed just right. It had been well maintained, parking was plentiful and it had the original two-car garage out back just waiting for her. The deal was struck; and, within days, plumbers were in replacing bathrooms that had been removed for the law offices and building new ones for the bed and breakfast.

In less than two months, Wingrove Manor opened for business, with freshly painted woodwork, new awnings on the second floor and lovely furnishings. It’s a beautiful home for Winnie and a lovely place for visitors to stop as they explore Washington County.

Epilogue: Now nearly 80, Winnie continues to operate the bed and breakfast, getting most of her reservations from her new website.

This article appeared in the Herald-Mail Sunday, December 4, 1994 as the 63rd in the series.