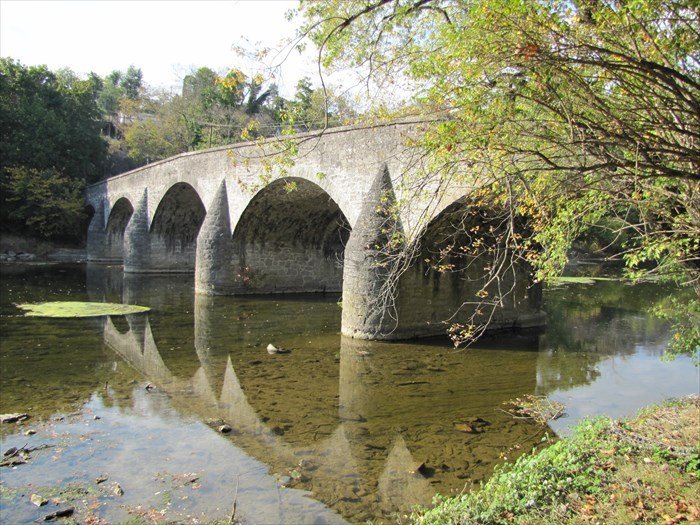 West of Hagerstown, Route 40 narrows to two lanes as it pushes into the countryside. Tidy homes, farmsteads and small businesses line the way in a random mix that is common along country roads. Near the entrance to Hagerstown Speedway, a small road Y’s to the right and slopes to a barrier. A marker proclaims, Wilson Bridge – Link between East and West. Built in 1819, this five arch structure named for nearby village was the first stone bridge built by Washington County. Erected by Silas Harry at cost of $12,000, it was a major improvement to road system between Baltimore and Cumberland, providing continuous smooth surface from eastern seaboard to western wilderness. Wilson Bridge carried traffic until seriously damaged by storm flood in 1972. It was placed in the National Register of Historic Places in 1982. A small picnic area lies to the left; and the old bridge surface, just one lane wide and closed to vehicles, offers a quiet stroll to anyone who will take the time. Another plaque commemorates the County Commissioners and the Maryland Historical Trust for restoring the bridge, and in the center are two stone markers. The upper one reads:

This dry record conceals the dramatic story of the narrow escape of Wilson Bridge.

Standing low beside its replacement, the main road diverted onto a newer structure, the old Wilson Bridge served local traffic and gradually fell into disrepair. A wonderful place to fish, as the tangle of lines and sinkers caught on power lines above the span testifies, little was done to maintain the old bridge. Eventually Hurricane Agnes spawned floods that seriously damaged the structure, and the bridge was closed to traffic. An effort was started to save the bridge and to nominate it to the National Register of Historic Places. Time passed and stones dropped from the bridge forming an ever-increasing pile; finally an entire section of the span collapsed into the Conococheague, and the situation became critical.

While the Washington County Committee of the Maryland Historical Trust continued the fight to save it, the County Commissioners had the public safety and the public purse to consider. Six hundred thousand dollars to restore the bridge was the figure the members of the Trust were given. It was an awesome, impossible amount. Then, one day, LeRoy Myers, a local mason who had become interested in the bridge, said with a twinkle in his eye that he could do it for $100,000. Was he serious? It was the eleventh hour; the County Commissioners were going to vote $30,000 to raze the bridge at their next meeting. Knowing that such a low figure might not even cover his expenses, Frances Horst, a member of the committee, returned to LeRoy Myers, certain that he would tell her he was just joking. Not so. With certain conditions, he would do the job for $100,000. The members of the committee crowded the Commissioners meeting the next morning. With the low bid in hand, they asked that the Commissioners vote the $30,000 demolition money for stabilization and restoration instead, and the Commissioners agreed as cheers rose from the crowd. Federal and state funds were sought, the Bowman Fund made a donation and private contributions flowed in. The bridge was saved. The efforts of the community and the contribution of LeRoy Myers made it possible.

But the bridge is only part of the Wilson community story. In 1847, Rufus Hillary Wilson moved from the Eastern Shore, acquired the property on the western side of the bridge, married a local girl and started a general store. The Wilsons lived in the small stone house that was already on the property.

In 1850, he built a one-and-a-half story stone house next to the store. Sadly, within a year he had lost his wife and two children, with only his son John surviving. In 1855, he built a one room brick school for his son and other neighborhood children. After the Civil War, R. H. Wilson made massive alterations to his home, adding a large brick addition, a mansard roof and another story. He also enlarged the store.

The only surviving child of John Wilson, Mrs. Margretta Hayman, remained in the family home and rented the store, which finally was abandoned when the storekeeper became ill in 1975. The store suffered bouts of vandalism; and in 1983, Mrs. Hayman died, childless and in her 90s. The property had been little changed since her grandfather’s time.

Lewis Horst had often remarked that he would really like to have a little general store when he retired. He would sit on the porch, talk to people and not care if he sold anything. When his wife Frances saw the sale sign on the Wilson Store, she wanted it; but because of zoning laws, the property could not be divided. The store and the house were a unit. While it was a larger commitment than they had planned, the Horsts made an offer. The same day the County Commissioners voted to save the bridge, Frances and Lewis Horst learned their bid for the Wilson property had been accepted. The time since then has been filled with work for them. The first two floors of the house have been restored, furnished with antiques and function as a bed and breakfast. The fittings for the post office that once operated in a portion of the store were found in the barn and returned to their original positions. Original graining and paint remain on the doors and the wainscot. The store is filled with period store fixtures and merchandise as well as modern items that are for sale. Upstairs the large, open room that once served as a theater has been converted into the Upstairs Emporium where Frances and her daughter sell women’s clothes. The western wing is still a feed store and houses a delicious collection of period fixtures and oddities. Outside stands a red peanut-roasting machine that still works.

The most recent acquisition is the old school house, which had been taken over by the county in the 1880s and operated as a one-room school until the 1950s, when it became the meeting place for Wilson Ruritan. Frances has furnished the school with 19th century double desks. Some are heavily carved by former tenants, and one looks as if its edge had been gnawed away. One can only imagine the torments of its occupant as he pursued his studies. A potbelly stove, slates, chalkboards and a schoolmaster’s desk and stool fill the room. The assortment of small period items and memorabilia make it seem as if the teacher and her class have just left for a moment.

The Horsts run the complex that they saved for their pleasure and that of the community. The store is open daily and the other buildings can be seen if you ask. If you are lucky, there will be fresh, hot roasted peanuts to eat.

Epilogue: In the fall of 2000 the Horsts were finally able to buy the small stone house that was Wilson’s first home. Friends have told them that the spirit of a little girl in a white dress haunts the house and can occasionally be seen sitting on the front lawn crying. Frances hopes she does not encounter this ghost and that it won’t interfere with her plans to restore the house. She hopes to rent it to a dealer in antiques so that the house will be filled with appropriate antiques and have rockers on the porch.

This article appeared in the Herald Mail Newspaper, Sunday, June, 4 , 1989 the 2nd in a series of articles by Patricia Schooley about the historical homes of Washington County.