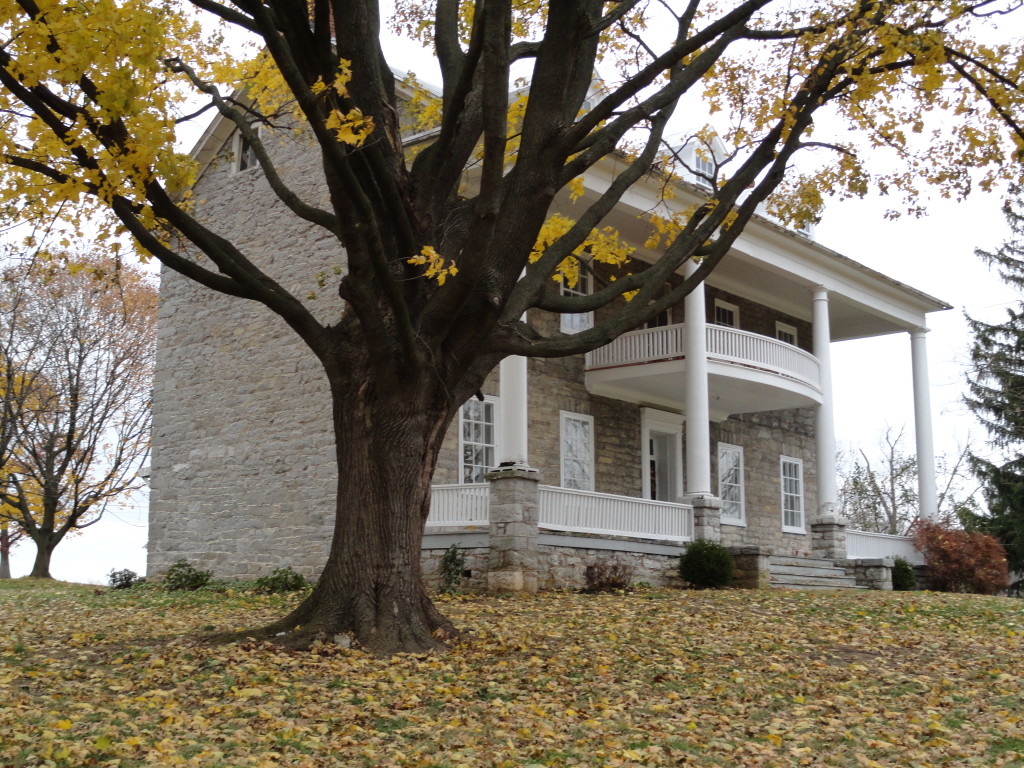 Valentia being restored by its owner

Poffenberger Road spreads east from Sharpsburg Pike, a broad new avenue following an old path. Past new subdivisions and cultivated fields, it curls into a bend in Antietam Creek. To the left, shrouded by massive old trees, is a complex of early stone buildings spread across a hill. Facing the road, a massive stone house with colossal columns that support a porch stands near the top of the hill. A smaller, second-story porch is hung between the two center columns. Five bays wide with a handsome central entrance, the house has three dormers above and originally had eight large rooms. The house was expanded in the early 19th century.

Behind this house a massive brick fireplace is sheltered under a roof that has been extended from the roof of the dairy house. This building, with its well and pump, stored foods and kept them cool. The fireplace was built in the 1950’s as an outdoor cookery. 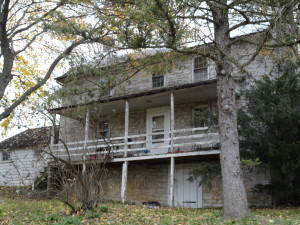 To the left (west) of the manor house stands another stone house, facing east, tucked into the hill, its three stories exposed on the west. A door on this west side opens into the cellar level, with the principal entrance of the house on its east opening into the second level, the main floor of the building.

Some distance east of the great house a huge stone barn faces west above the creek, its walls collapsed in spots. The structure has been stabilized, but repair is far in the future. Across the road next to the creek, foundation remnants of the massive, three-story, hip-roof stone mill that once dominated the site can barely be found.

In front of the stone barn, a bit further east, stands a large frame wagon shed. In front of it, close to the road, another stone house, the Miller’s house, turns its back to the road, three stories facing the site where once the mill stood. Doors open into this lower level, but the formal entrance to the home is in the center bay of the west wall, which opens into the main (second) level of the house. Its two-story north wall faces toward the barns. A double porch spans this façade. A rail of scroll-cut Victorian splats spans the upper porch, a remnant of a century-old renovation of this building. Ninety-two year old Mitch Dodson remembers being immersed in Antietam Creek for his baptism as a twelve-year-old and changing clothes in the Miller’s house basement. This remarkable collection of stone structures is Clagetts Mill.

Clagetts Mill appears on Dennis Griffith’s 1794-5 map, indicating the complex already existed in the 18th century. Whether the mill noted on this map was the same massive, hip-roof three-story stone structure that burned around 1900 isn’t known.

In 1749,Thomas Clagett patented a 100-acre tract called Maid’s Fancy . Hezekiah Clagett surveyed another 198 acres in 1789, calling it Clagett’s Lot. A tract first surveyed in 1764 was resurveyed in 1803 as Clagett’s Luck. In 1815, another Hezekiah Clagett, nephew of the first Hezekiah, and his brothers, Samuel B, John Beall and David sought a warrant for a resurvey that combined their lands into a single 732.5-acre tract. This resurvey happened to be recorded on Valentine’s Day, and, in honor of this happenstance, the brothers named the tract Valentia. The stone buildings all date from the late 18th century, although a large addition to the manor house along with the magnificent columned portico was added in the early 19th century. 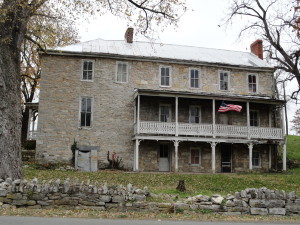 Mills were first built to convert grains into flour for local families. Excess grain was then ground into flour to enable it to be shipped to market.  Mills began to line Antietam and Beaver creeks in the 19th century, sometimes backing water up into each other’s races and provoking lawsuits. Water flow was the power source, the engine that ran gristmills, sawmills and powder mills, as well as forging iron and other tasks that clever men could devise. Small villages grew up around these mills.

Valentia was such a complex.  In 1820 the Census of Manufacturers listed the D. and H. Clagett mill as having three water wheels. Consumption was 30,000 bushels of grain and 100 tons of plaster. Thirty years later, the same Census of Manufacturers listed Samuel Clagett’s water mill as being a $20,000 capital investment having 3 employees with an output of 16,000 barrels of flour (it took 5 bushels of grain to produce a barrel of flour), 3,000 bushels of corn and rye and 120 tons of plaster. In a 1982 Cracker Barrel article, Richard Clem reported that Valentia was the largest local grain producer and that the price of grain at this mill set the grain price for the whole area.

Slavery was a sad fact of life then. Clem noted that John Weaver, who built the nearby bridge across Antietam Creek in 1840, wrote of seeing over a hundred slaves working in the fields for the Clagetts.

Hezehiah Clagett outlived his brothers. On March 4, 1863, a Herald of Freedom and Torch Light headline advertised PUBLIC SALE (HEZEKIAH CLAGETT TO QUIT FARMING).  Hezekiah had sold the property to Alexander Armstrong on January 27th of that year. Armstrong lived in the Mansion House in what is now City Park in Hagerstown and did not move to Valentia.

After the Civil War, agriculture changed and moved to the rolling lands west of the mountains. Here, farmers planted winter wheat in their fields and used steel mills instead of stone ones to grind this grain. The center of grain farming thus moved west, and the milling culture of Washington County diminished and finally ended. Apparently the structures at Valentia were neglected during this period and fell into disrepair. 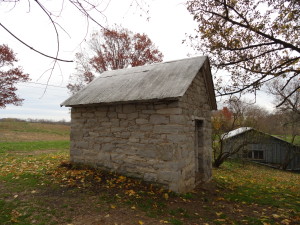 Judge Thomas A. Poffenberger purchased the property from Armstrong’s heirs in 1909 and began to restore it. It was he who rebuilt the magnificent porch of the mansion house. Early in his ownership, the huge, three-story mill burned, losing most of its roof. The judge always suspected it had been torched by some miscreant whom he had sentenced in his court, but this was never proved.

Judge Poffenberger used the stone from the walls of the mill and turned them into gravel to improve the road, which was nothing but a dirt path. Family lore describes the Judge and his sons working along the road hammering the stones into bits, then spreading the dust and gravel on the road to improve the surface. He also used these stones to build stone walls along the road in front of the houses.

Judge Poffenberger died at 58. He had spent most of his capital buying and restoring the farm, and there were few resources left for the family. One of his sons moved to the farm to support his mother until her death several years later. It was the depth of the depression, and, when the heirs settled the estate and sold the property, they chose one of their own, one of the Judge’s daughters, Helen Poffenberger Roulette and her husband Ellsworth.

Helen and her husband turned Valentia into their home and raised their only son Robert there. Helen remained in the home until her death at 94. She remembered moving there as a child when there had been five or six slave huts along the Antietam Creek beyond the mill, each with a garden plot and an outhouse. The stone house to the west of the manor house was considered a slave house. The upstairs rooms had housed slaves who worked in the manor house, and the lower level was used to wash laundry, butcher and other chores. In the 1950’s Robert excavated the foundation to make a basement that could be entered from the west, and he and Ellsworth converted the house into a rental. Robert also built the massive brick fireplace next to the dairy.

After Helen’s death, the family moved to other quarters over time, and all of Valentia became a rental property. The fields were rented, and the buildings became housing. Little maintenance work was done during this period, and neglect deteriorated the structures. The barn suffered the most. At last, drawn by Helen Roulette’s love of Valentia, one of her descendents has come back to the childhood home and is working to restore the farm, ever so slowly. 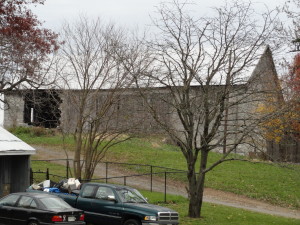 This is the 204th in a series of articles about the architectural and historic treasures of Washington County as it appeared in the Herald-Mail.