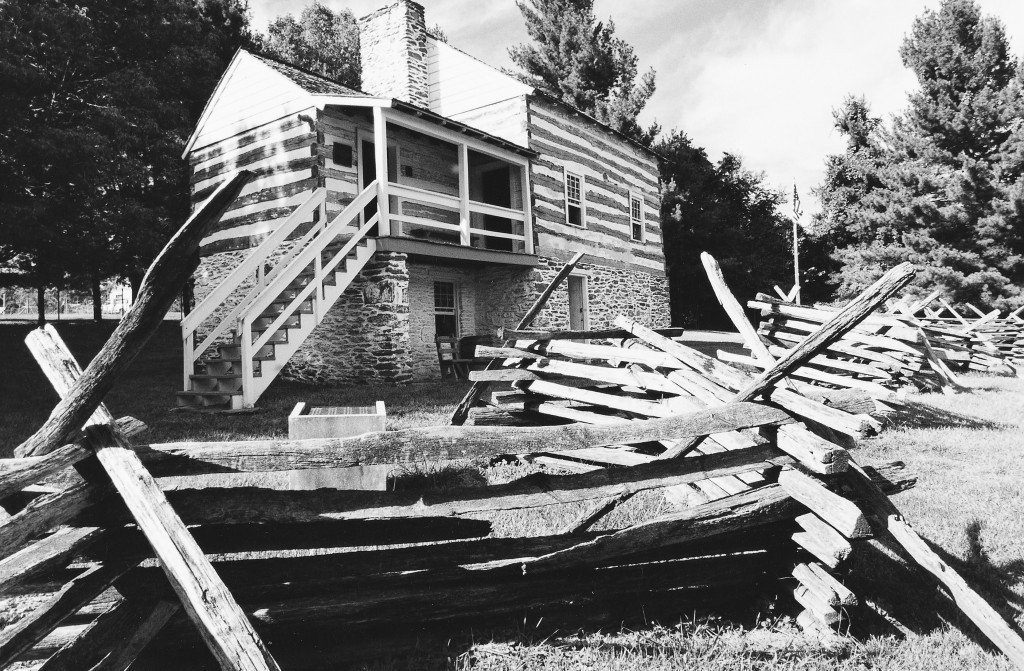 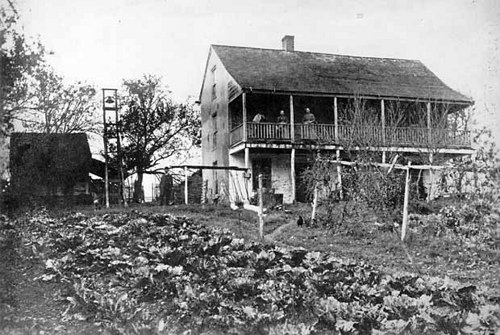 It’s the best kept secret in the state!” declares South Lynn as he gazes toward a small log cabin perched on high stone foundations. Then he launches into the story of the old place. This rustic cabin is a National Historic Landmark, one of only two in the county, a place considered to have national significance. Lynn’s love affair with the little place began in 1965 when he saw a story in the Washington Star headlined, John Brown Hideout for Sale, with a photograph of the building and a Hagerstown dateline. 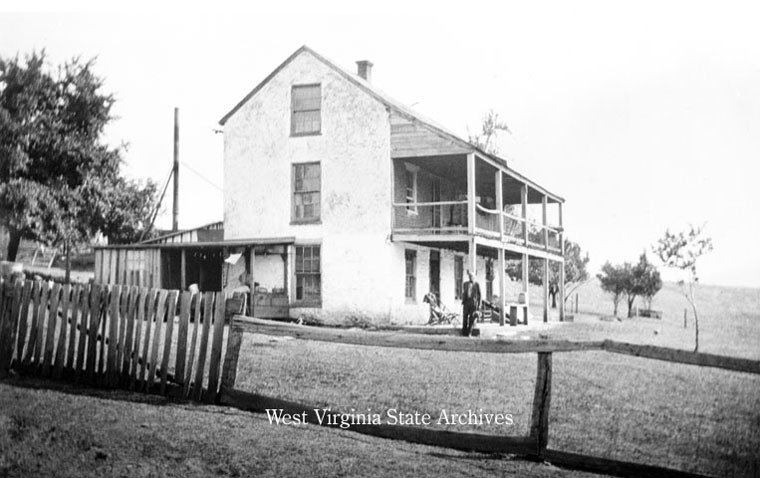 In 1859, abolitionist John Brown came into this area with a plan for an insurrection of slaves. He searched for a private piece of property where he could organize his raid on the arsenal at Harper’s Ferry without being noticed by neighbors.

Dr. R. F. Kennedy had purchased a collier’s cabin and 194 acres of land from Antietam Iron Works in 1852 as an investment. He had the story-high stone foundation built and raised the one-room cabin onto it, then added a larger, two-story wing to the northeast. Kennedy died seven years later, and his farm was empty. Brown, using the name Isaac Smith because he was wanted for abolitionist activities in Kansas, rented it for $35 in gold from the trustee of Kennedy’s estate. He stayed there while he gathered troops and organized his abortive raid on Harper’s Ferry. His sixteen-year-old daughter Annie and his seventeen-year-old daughter-in-law Martha served as cooks and housekeepers for this Provisional Army, which grew to number 21 soldiers, including Brown’s sons Owen, Watson and Oliver. It is this three-and-a-half month period that is nationally significant. 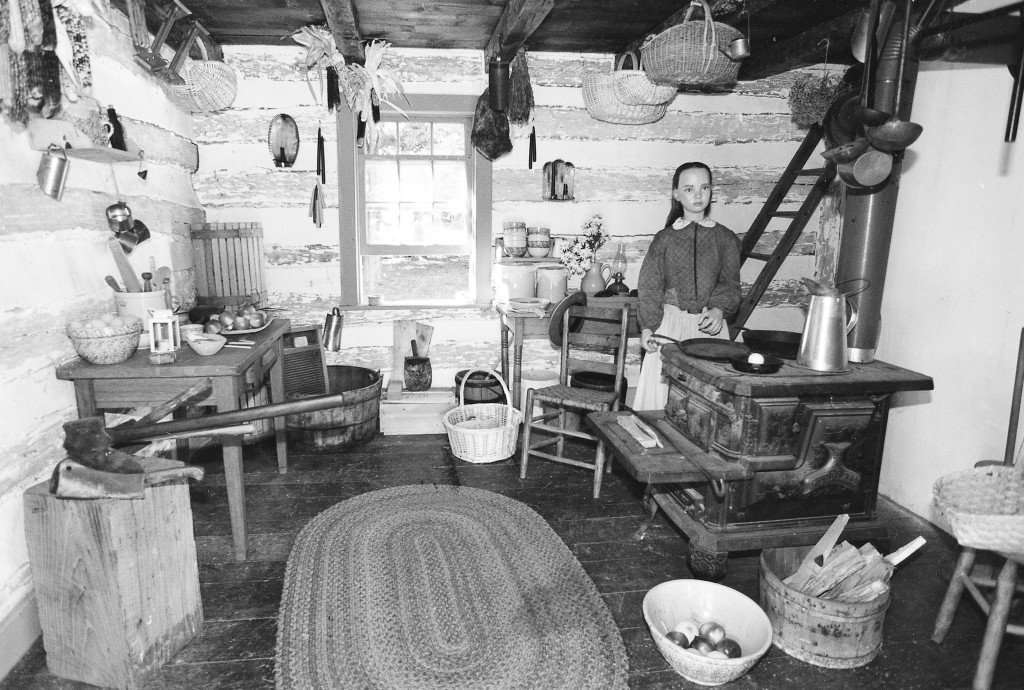 The farm passed through many owners and was altered extensively over the years. In 1950, the National Negro Elks purchased it when Leonard Curlin, a Hagerstown Elk, persuaded the Tri-State Elks Lodge of its worth. The Elks had hoped to restore the house and make it a museum and shrine for Brown, who, Curlin said, …struck the first blow for my people. Funds were slow in coming, and after some years the Elks could no longer maintain the property. They had placed the farm on the market when Lynn saw the story in the paper. When he first saw the place, he was overwhelmed even though it was in very bad shape. Meanwhile Bonnard Morgan had purchased the farm for resale in 1966. In 1972, Lynn leased the house for a year. He took this time to do research in the Maryland and National Archives to make certain that this really was what people said it was: the place that John Brown used to stage his raid on Harper’s Ferry. At the end of the lease, Lynn convinced three friends to join him to buy the house with about two acres for $40,000.

It has really been Lynn’s project since then. He has courted politicians, lobbied the Bowman Board and the Maryland Historical Trust for funds, written grant applications and applied his considerable charms to get restoration specialists to help. A. W. Franzen, a noted restoration architect working for the National Park Service, prepared a report describing the 1859 building and its proposed restoration. In the end, the Department of the Interior funded about half the cost of restoration. Louis Goldstein, comptroller of the state, got behind the project and allowed the Bureau of Public Works to fund much of the rest. 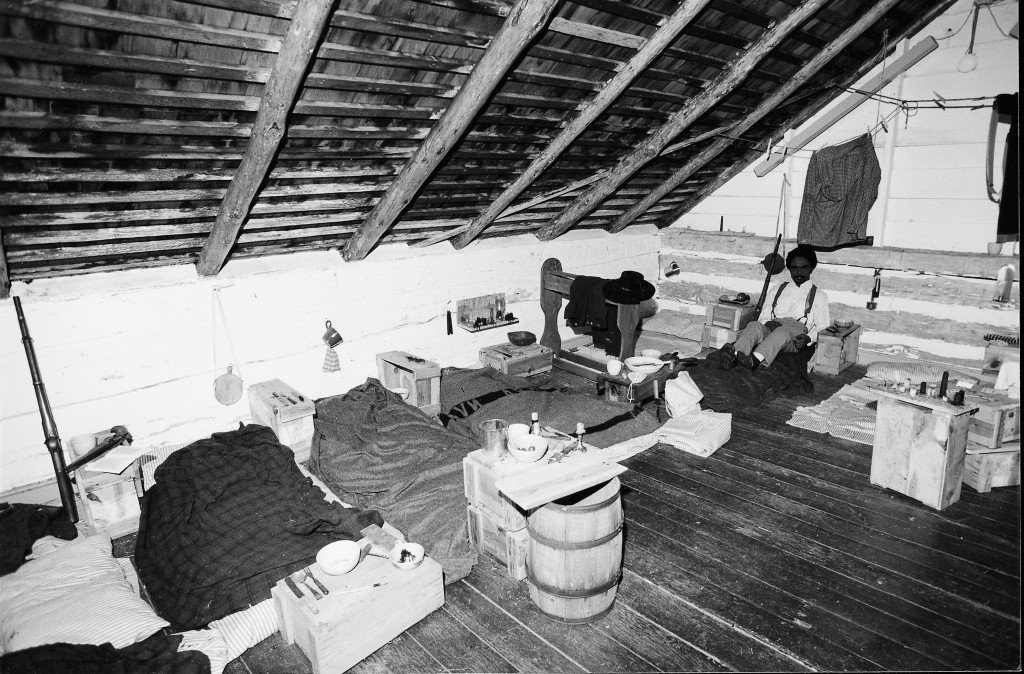 The loft was the mens sleeping quarters.

Several sources of historical information made the project possible. A drawing of John Brown’s Residence appeared in Frank Leslie’s Illustrated Newspaper on November 26, 1859, and provides a clear picture of the front of the farmstead. Annie Brown lived to a considerable old age, wrote numerous letters and was quoted extensively about life at the Kennedy Farm. In 1860 a Senate Select Committee convened to inquire into the facts and circumstances connected with Brown’s raid on Harper’s Ferry. This committee gathered its findings into a document called the Mason Report and several passages in this report describe the farm. Osborne Anderson, one of Brown’s raiders, wrote an account of his recollections published in 1861.

Using this information along with physical evidence found in the building, Franzen pieced together how the house had looked at the time Brown was there. Armed with a plan, Lynn cleared debris and began restoration. National Historic Landmark status was granted in 1973. This recognition opened doors for both recognition and funding. Lynn’s younger son Sprigg purchased period pieces and furnishings for the house as well. Over time, Lynn and Harold Keshishian bought out the other two partners, with Keshishian remaining in the background but providing critical financial support for the effort.

The house itself is functional, without ornament. The original collier’s cabin was a single room with a loft, probably with little or no foundation. Dr. Kennedy enlarged this by having tall stone foundation walls created to make a ground level. The collier’s cabin was then moved on top of part of this foundation and a larger log addition built over the rest. A large stone fireplace served this level. This area was used as storage in 1859, for no interior stairs connected the ground floor with the main floor at that time.

The main level of the house is accessed by steps leading from the ground to a porch and contains three small rooms. The collier’s cabin became the kitchen with an iron cook stove and a single door opening onto the porch. The addition is also accessed through a door on the porch and contains two rooms. The first room was used as both a dining and a living room in 1859, and it has the closed winder staircase to the attic where the men slept and hid when neighbors appeared. The back room, entered from the dining room through an original four-panel door, was Martha and Annie Brown’s bedroom. Moldings are plain; windows have six-over-six sashes. Logs are hewn and joined with inverted V notches. The gable ends of the house were covered with random-width beaded boards. 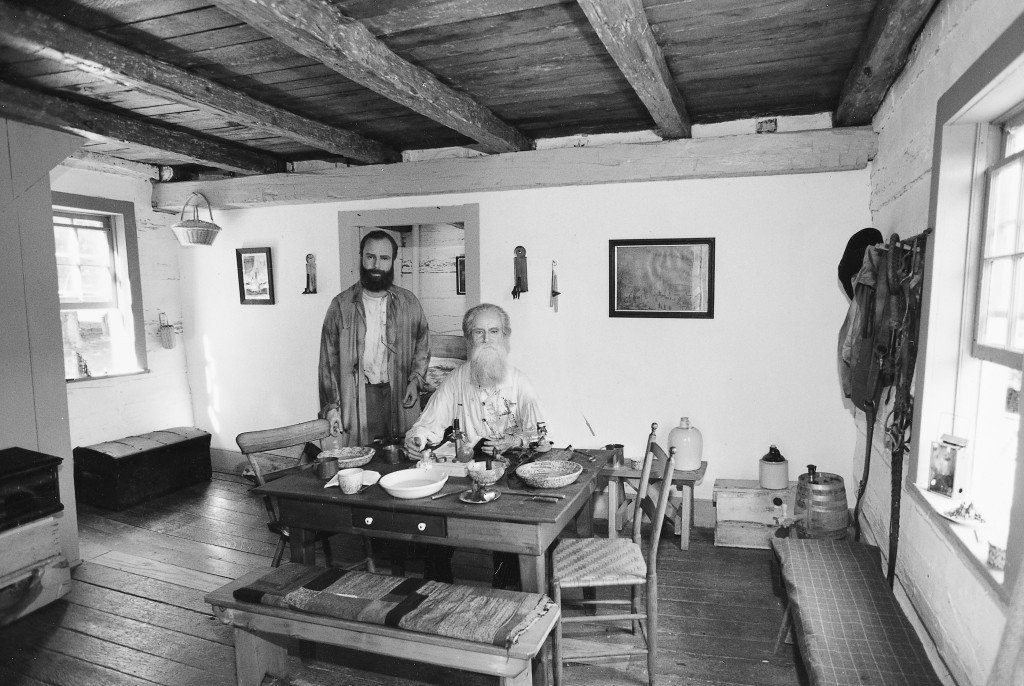 Mannequins of John Brown and his son Owen are displayed in the gathering room.

The house had been changed extensively. The collier’s cottage had been expanded and a double porch put across the front of the house. The northeast gable end of the house had been veneered with brick and the rest of the house stuccoed. A stairway to the ground level was placed under the stairs to the attic by removing much of the interior stone wall beneath it. And an addition had been cobbled onto the rear and side of the collier’s cabin. To reverse all the alterations, the house had to be taken apart then put back together again using the original fabric that remained and replacing missing parts. It was a huge task, but Lynn and his family saw it through and many others helped. Martin Conway, then the director of Harpers Ferry Historical Park, gave a split rail fence that the park could no longer use to the Kennedy Farm so that the front view would match the one in the 1859 drawing.

Some things are still missing. On the nineteenthof October, 1859, George Nichols and his son David took the iron cook stove that Annie and Martha had used during their stay. Another son George sold the stove in 1882. The Park Service acquired the stove and it is now on display at the John Brown Museum in Harpers Ferry. South Lynn hopes that the National Park Service will return the stove to Kennedy House. “After all,” he says, “They are trafficking in stolen goods.”

John Brown sits at the dining room table now, his piercing eyes fixing visitors as they enter. His son Owen stands beside him. Sixteen year old Annie is in the kitchen. Shields Green, an escaped slave, and Jeremiah Anderson still hide in the attic dormitory. All are marvelously realistic mannequins made by Robert Dorfman of Dorfman Museum Figures in Ellicott City. South Lynn talks with the figures; some day he expects them to respond, with the help of some sophisticated electronics.

The house is open whenever Lynn is there, cutting the grass or doing other chores. Tours can be arranged by calling him at (202) 537-8900, fax (202) 537-0887. But it is a good visit even if no one is around. The site is peaceful, you can peek in the windows, and on the porch is an information box that will play tapes when buttons are pushed.

Lynn continues to be enthralled with the house and its history. “We’ve been a nonprofit from the beginning,” he says. But they just recently got 501(c)3 status from the government as the John Brown Historical Foundation. He dreams of raising funds to create a museum and a bookstore on the property. After 27 years, Lynn is still fascinated by the place and still loves to give tours.

Note: Kennedy Farm is located at 2406 Chestnut Grove Road, Sharpsburg, Maryland, 21782, and can be seen at www.johnbrown.org.

This article appeared in the Herald-Mail Sunday, September 12,1999 as the 119th in the series.