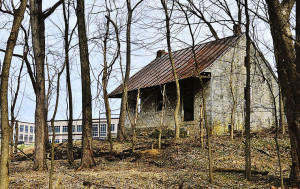 In 2007, planning for a new business park began in Hagerstown. The 29-acre parcel slated for development stands along Jefferson Boulevard, east of Eastern Boulevard from where Diamond Drive and Professional Court lead. Antietam Creek curls around the eastern margins of this section, its banks choked in weeds and scrub brush.

A large bank barn stood to the south, hidden in vegetation. Logs from a fallen house lie near the stream, and a small stone house, empty for half a century, stood engulfed in scrub on a small rise above Antietam Creek.

As David Lyles began planning Hagerstown Light Business Park, with concern for preserving the county’s history, he alerted the preservation community to the structures that stood in the area.

Today, the house is seen as visitors wander into the newly formed Kiwanis Park off Dynasty Drive.

A home is built 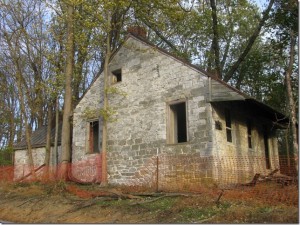 In 1790, Peter Sailor (1753-1836) inherited land from his father, Mathias Saylor, and began collecting adjacent parcels. By 1799, Peter had accumulated 231 acres. His estate’s inventories included farming implements and livestock. He was a farmer.

In 1841, Joseph Emmert bought the property and added five acres. This 236-acre parcel belonged to several members of the Emmert family over time and, in 1877, was acquired by Joseph Loose (pronounced LOW-s) and remained in that family until 1965.

The next owner, Loose, was married to Henrietta Bachtell, whose father was a “gentleman, who belonged to an old county family (and) was an extensive landowner,” according to TJC Williams’ “History of Washington County Maryland.”

Loose became the executor of Bachtell’s estate and began to deal in real estate. The small stone house near Antietam Creek was not the Loose family home, but was used by the tenant farmers who rented the land. As such, it probably received marginal care, and, after the land was sold to ADCO Inc. in 1965, it probably was not used at all. 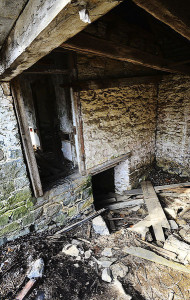 Despite more than 50 years of neglect, the little house still stands, its quoined corners straight and true, its metal roof, though pierced, still protecting its framing. Its interior walls are now decorated with a great, painted marijuana leaf and other graffiti, its doors and windows missing. The house still has sturdy 2-by-7-inch rafters supported by 7-inch-square summer beams. On the second floor, 2-by-4-inch studs, placed with their long sides parallel with the wall, an 18th-century technique, hold remains of plaster.

The main block of the small house contains two rooms on each level. A room with a fireplace and three windows fills the southwest corner of the first floor. North of that is a rectangular room with one window on its north wall and one on the west. A hall extends the length of the east side, with steep winder stairs rising in the northeast corner.

The wing on the house is a detached summer kitchen built just slightly above ground level, with its west wall attached to the house just east of the main house’s north window. A windowless room on the north side of the kitchen was a smokehouse. The kitchen’s service fireplace sits in the northwest corner and probably supplied the smoke for the smokehouse, but no holes in the separating wall are clearly evident. There is no wall on the east side, leaving the area between the house and the kitchen open to the outside on its east side.

Doug Reed, an expert on early log structures, purchased the logs from the fallen two-story house, reusing them at his farmstead outside Mercersburg, Pa. Dendrochronology on the logs revealed they were felled in 1779, just 11 years before Peter Sailor inherited the property from his father, indicating when the farmstead was built. 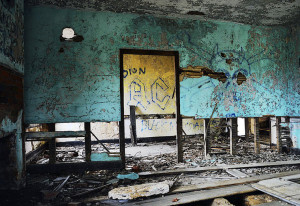 When planning the business park, the area was set aside as open space, and the Kiwanis Club joined with the city to provide a public park along the Antietam called Kiwanis Park. A natural swale has been planted with native plants and will serve as a catch basin for stormwater. Two water-permeable walkways, slightly elevated above this area, lead to the creek, and a new stream bank restoration also serves as a canoe/kayak ramp into the Antietam.

A round, open-sided pavilion adds picnicking space, and attractive signage identifies the area and its amenities. The Monarch Alliance, a Washington County-based group, provides a way station for the monarchs on their migration.

Ron Hutzell remembers playing on the Loose Farm as a boy 50 years ago, when the Antietam was full of grasses and teeming with fish. The houses and outbuildings of the farm were unused then and the stream heavily overgrown, but the boys hunted for limbs out over the water so they could climb out and drop baited lines weighted with nuts into the water to catch fish. 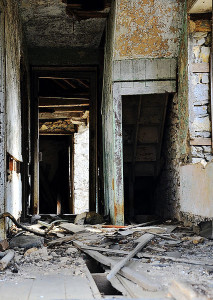 The City of Hagerstown, now the owner of the park, is open to ideas about what to do with the structure. Merry Stinson of the Washington County Historical Trust and Dave Biser from Antietam Conococheague Watershed Alliance are joining with others to work with the city to reuse the remarkable old structure. It is hoped that it will be stabilized and used as an exhibit to demonstrate the masonry skills of our 18th-century forbearers.

Perhaps it could be restored as a home for a park caretaker. That would provide not only a charming home but a physical presence in an area that will otherwise be lacking people to see what goes on after business hours. It could be used by for displays, workshops or events.

This article appeared in the Herald Mail Newspaper, Sunday, March 20, 2016