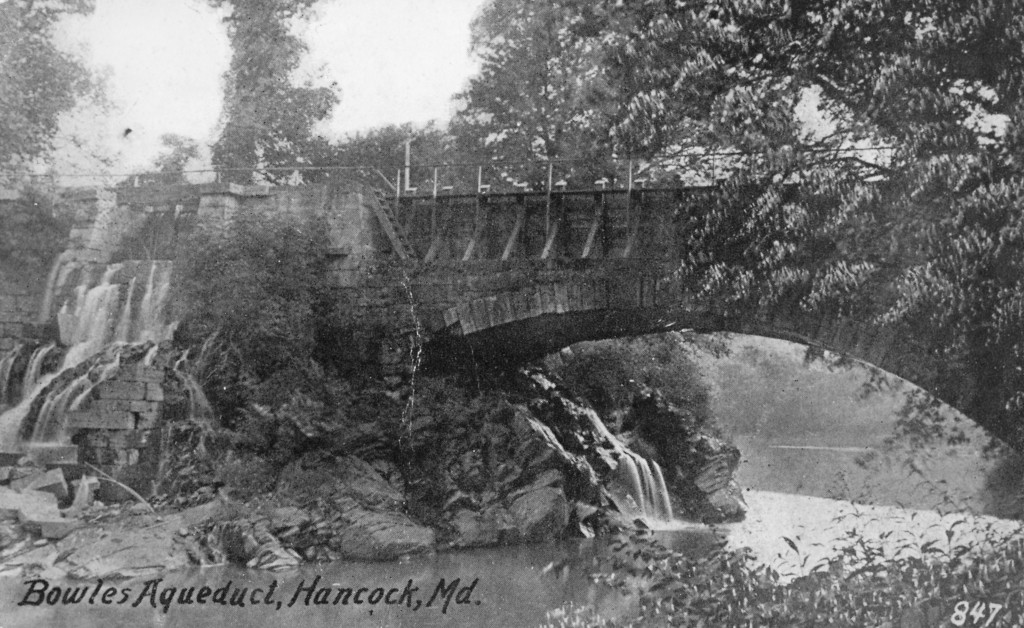 Bowles Aqueduct carried the C&O Canal over Great Tonoloway Creek not far from Bowles Mill. The downstream end of the aqueduct was built into a bedrock cliff and it was this juncture that breached, causing the waterfalls shown in the picture. Photo from the collection of the Hancock Historical Museum

Hancock is a quiet town tucked beside the Potomac at the narrowest spot in Maryland, just two miles separate West Virginia from Pennsylvania at this point. Its Main Street is lined with small, Federal style brick buildings that are built close to the street. There are a few country Victorian homes as well and a scatter of low, modern storefronts. The buildings are well kept but not restored. A pleasant but not unusual small town, it appears. But Hancock has its secrets and is steeped in history. 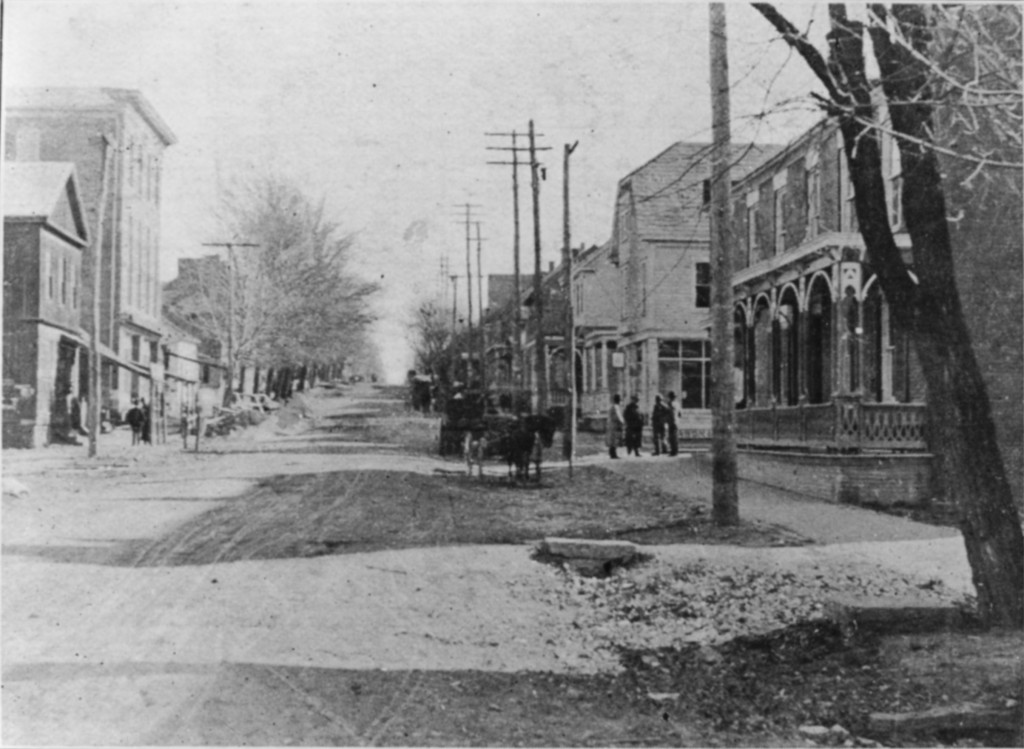 Local Indians first chose this spot, the Great North Bend, to ford the Chonogoruton (Potomac) River; and it was a natural spot for early settlers who began arriving in 1732. The scattered huts they built to shelter themselves were known as the Tonoloway Settlement (Tonoloway is the Indian name for two nearby creeks) and as Williams Town. In 1749 Joseph Hancock arrived, laid out the town and named it for himself. The Baptist Church on Tonoloway Creek was founded in 1752, and the settlers worshipped there, often in relays to guard against Indian attack. The church was twice destroyed by Indians, but the simple brick structure, erected on the original site in 1802, still stands today on Pennsylvania Avenue Extended, a lovely example of early church architecture. Ironically, it is now in Fulton County, Pennsylvania. When the Mason-Dixon Line was surveyed to settle a boundary dispute between the Penns and the Calverts in the 1760s, the church site lay just on the north side of the line.

Transportation has always played an important role in Hancock’s history. Early on, Hancock was a stagecoach stop with passengers and cargo carried across the river by ferry. Next the Bank Road was built through town to connect with the National Pike in Cumberland. The Chesapeake and Ohio Canal (C&O Canal) was completed in 1850 and skirted the southern limits of the town. Hancock was one of the important commercial area on the canal between Georgetown and Cumberland. Hydraulic cement was quarried from Round Top Hill, burned in huge kilns and shipped in barrels both east and west; bark was gathered for sale to tanneries and dye works; and sand for making glass, pottery and tile was mined from Round Top as well. Later the Western Maryland Railroad supplanted the canal, which ceased operation in 1924 after a severe flood. The canal and locks can still be seen. The C&O Canal Visitor’s Center on Main Street has authentic models of canal boats and locks, as well as exhibits and a slide show. 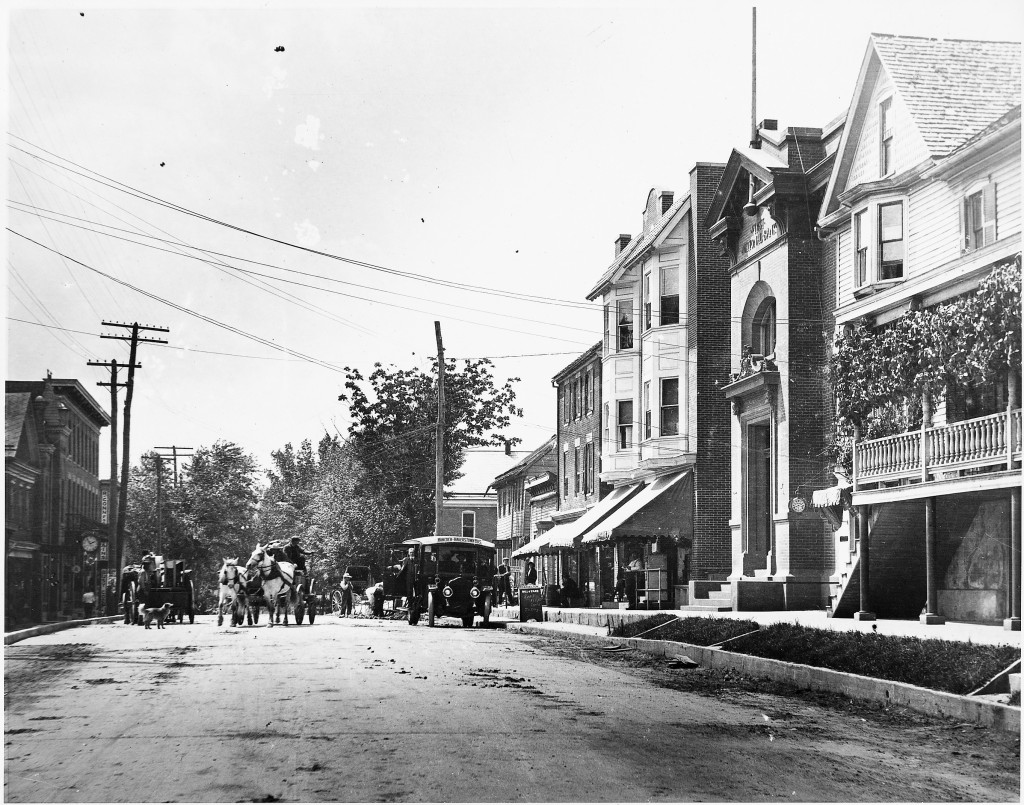 On High Street, which lies parallel to and north of Main Street, stands St. Thomas Episcopal Church, built in 1835. The church is brick laid in Flemish bond, with a short, louvered steeple topped by a cross. Next door St. Peter’s Catholic Church was built for the Irish immigrants who labored to build the canal. A year younger and also made of brick, St. Peter’s is a good companion to St. Thomas. These churches, with their ancillary buildings, surrounding graveyards and old trees, create a peaceful corner. When roads were less traveled, the children of Hancock were known to sled down Church Street and across Main Street, sometimes going all the way across the bridge over the canal. 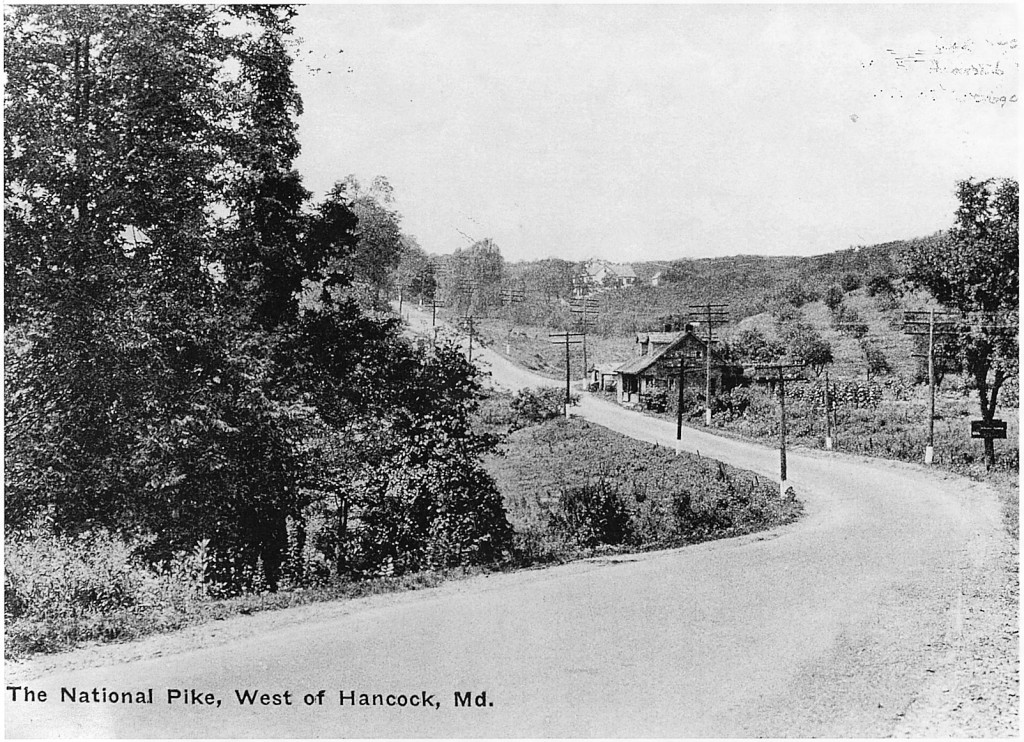 Further west on High Street, in the lower level of the Municipal Building, is the new museum of the Hancock Historical Society. It houses a large collection of antique tools and memorabilia that give a charming picture of Hancock through the years. A collection of transportation artifacts will soon be displayed in a separate section. Created and run by volunteers, the museum is open from two to four p.m. on Sundays or by request.

The vitality of the early settlers lives on in the buildings and tools they have left behind. You have only to look with a discerning eye at these things to see those who have passed by before. The courage, the fortitude and the whimsy of Hancock’s first citizens have left faint traces in the things they made and used. We are all richer for this legacy.

Dalecarlia outside Hancock, MD before restoration.

South of Main Street, Canal Road hugs the edge of the canal, finally turning right to cross the railroad. To the right, partially hidden by undergrowth and weeds, lies Dalecarlia, a magnificent three-story stone house with two wings and porches on each level. Dalecarlia was built in the late 19th century on a 1774 land grant and was once home to a prominent doctor. It is now abandoned, however a group of entrepreneurs are trying to purchase the property.

Epilogue: A section of the C&O Canal has been re-watered near Hancock and its towpath is used for both walking and biking. In 1991, after four years of frustrating negotiation, Ross Cook and his wife Carol Becker purchased Dalecarlia and began a decade-long odyssey of restoration that is still not complete.

The house has 5,600 square feet of living space, not including the basement and two-car garage. The Cooks have undertaken a restoration effort of gigantic proportion. Channels had to be jack hammered in the stone walls to install conduits for a new electrical system that replaces knob and tube wiring.

Occasionally vibrations would drop a ceiling, adding dust, debris and more work to be done. The 21 foot by 43 foot living room has nine outlet receptacles in the floor, allowing lighting in seating groups in the center of this massive space. Halogen floodlights were placed in all the windows and wall-wash fixtures added to walls that will display artwork. All the plumbing has been redone, saving most of the early fixtures. This system has three pipes, allowing hot water to be instantly available throughout the house. This operates by continuously pumping hot water from the heater throughout the system.

A new industrial size 415,000 BTU furnace was installed, all the radiators refurbished and all the pipes replaced. Utilities are underground. Even small details are important. In order to save the look of the push button light switches yet have dimmers on most fixtures, the Cooks found craftsmen overseas who connected the on-off function to the top button while the lower one rotates to control the amount of light.

The eight bedrooms have been recycled into new and different uses, a security system installed and central air conditioning placed in the attic and snaked through closets. The basement floor has been excavated and replaced with concrete and a vapor barrier. The walls were then floated a half inch above this floor so that no water could again wick up the walls. To prevent water from washing down the slope behind the house to the foundations, Ross had a dry stream bed excavated parallel to the ridge and filled with gravel. This leads excess water away from the house. Finally, the plasterers started in the attic and plastered all the walls in the house, including the basement. In the living room, the ceiling is decorated with shallow panels that both define the space and accommodate the steel beams that were added to reinforce the second story. Decorative moldings in the dado were removed and have to be replaced before painting.

Ross believes that the house was built somewhere between 1850 and 1875 and was the size of the present living room, then divided into three rooms with fireplaces on its gable walls. Here the walls are 26 inches thick, built of stone quarried on the property. This house appears to have been added to an earlier complex of buildings. Recently, an arched brick structure has been found, filled with rubble, under the addition at the back of the house. Not enough of this is exposed to reveal its original use, but Ross thinks it may have been an icehouse.

Sometime during the 1920s a massive renovation was undertaken by the owner, Charles Locher. Locher was the engineer who built the 42nd Street Subway Station in New York City, and he brought that expertise to the task. Wings were added, built eighteen inches thick of the same local stone, central heat came with steam radiators by the American Company, and the entire first floor of the original house became the great living room. The house was plumbed with Standard Company porcelain fixtures in the bathrooms, and a vast septic tank, built with the same careful stonework as the house, connected to the system. The butler’s pantry has a copper sink with a marble surround.

The addition at the rear of the house was either built at this time or was an upgrade of an existing kitchen/utility space. A broad, open porch with square pillars sits on the south side of this addition. At one time it had a reinforced glass roof. Apparently the roof failed because the slope was not steep enough, and another metal roof with a better pitch was built over it, leaving telltale pieces of glass showing along its edge.

The Cooks next project will be replacing the front porch with new fabric but following the old pattern using rails similar to those at Monticello. Ross and Carol are enthusiastic about the project, and about all phases of their home’s restoration.

This article appeared in the Herald Mail Newspaper,  Sunday, July 2, 1989, the 3rd in a series of articles by Patricia Schooley about the historical homes of Washington County.