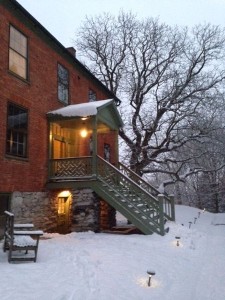 Falling Waters Road undulates over rolling farmland moving west from Spielman Road to the Potomac River. As it curls past a bluff on the north, the corner of an old brick house, obscured behind a tall thicket of evergreens, appears briefly.

Before it, a narrow gravel drive separates from the road, climbs the bluff to the front of this house, then descends again to join the road a little west.

Facing south, the five-bay house has two stories, with its main entrance in the center bay over the ground-level entrance into the basement. Windows have six-over-six sashes set in narrow, rounded frames. The house is brick, laid in Flemish bond on the front façade, set atop stone foundation walls. Wide, flaring flat arches made of exceptionally long angle-cut bricks top the front openings. Loose bricks can still be seen in putlog holes around the house at regular intervals.

Samuel Ringgold acquired a 1,070.5-acre land tract called Woodland Hills in 1811. The following year, he sold a 251-acre parcel of this land to George Showman for $10,560. Four years later, Showman bought another 420.75 acres adjacent to the first from Jacob Showman for $4,870. The difference between purchase prices suggests that the first parcel had improvements, but the second did not. 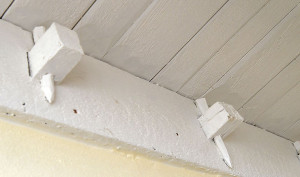 Daniel Donnelly, born in Ireland, purchased the 420.75-acre parcel from Showman’s executor in February 1833, for $3,682, less than Showman paid for it. Because the price was less than $10 an acre, it is likely that it still had no improvements.

Later that year, Showman sold 17 of these acres, which fronted on the river, to the C&O Canal Co. for $900, while retaining access to the Potomac River. The Canal Co. was to build a bridge over the canal to provide this access.

Donnelly was a member of the Washington County Canal Association, which formed in 1827 to promote the canal.

Donnelly was elected to the House of Delegates in 1829, and the 1830 census describes him as married, with a son and two daughters younger than 10, and five slaves.

It was Donnelly who built the brick home on Falling Waters Road shortly after he purchased the land. Donnelly was a businessman who practiced law and served as a justice of the peace. He built a handsome home influenced by federal and Greek Revival styles, with chimneys rising at either end and random-width pine floors. 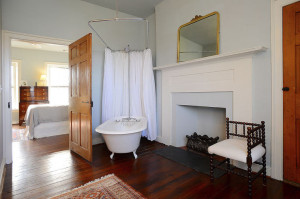 The front door of the house has six panels beneath a seven-light transom with three-pane sidelights. It opens into a wide center hall with stairs on the left. Changes in the floor and woodwork indicate that, originally, a wall bisected the hall, turning the forward part of the hall into a vestibule for Donnelly’s office, which was in the room on the left.

This wall allowed the family to use the rear of the house without disturbing Donnelly’s business. Clients parked across the road on flat land and climbed steps that were built into the cliff in front of 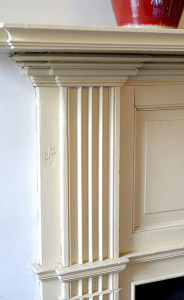 Donnelly’s office has a mantelpiece with a flaring shelf and deeply molded pilasters on either side of the firebox. A floor-to-ceiling chimney cupboard completes the chimneybreast. The room behind it has a fireplace with a pyramidal, rectangular panel in the center of its mantelpiece beneath the shelf. Simple woodwork has corner blocks. A modern full bath fills part of this room.

Across the hall are two parlors, separated by a broad arch, with fireplaces, beaded chair rails and Carpenter locks. Doors were once decorated with faux graining. In the hall, the staircase has a comfortable handrail with a volute at its end and square balusters. It rises to a landing with a window overlooking the yard to the north. 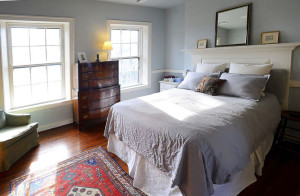 Upstairs, each of the four bedrooms has a fireplace. A room adjoining the master bedroom, probably for the Donnelly daughters, is now the master bath. The staircase to the basement is under the main stairs.

On Oct. 10, 1845, Washington County’s sheriff David Wilson was appointed by the court to sell Donnelly’s property to satisfy a $5,000 judgment against him and Charles Downes, who must have been a business partner. It was not until 1852 that the sale took place.

William B. McAtee purchased the land, including the house, outbuildings and the large barn to its north. Donnelly died in 1858. 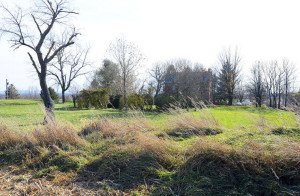 On July 13, 1863, the quiet of the countryside broke. Lee’s army, in retreat from the Battle of Gettysburg, was gathering on the banks of the swollen Potomac River south of Williamsport. Confederate Maj. Gen. Henry Heth’s army was ordered to withdraw from its position near Hagerstown at dark and to move toward Falling Waters.

The road was ankle deep in mud from the continual rain. Brig. Gen. James H. Lane wrote, “The retreat from Hagerstown the night of the 13th was even worse than that from Gettysburg.” 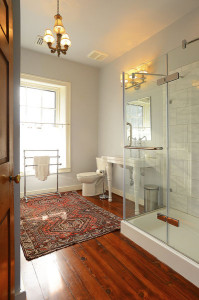 Acting as rear guard, Heth camped on the high ground behind the Donnelly house. Exhausted troops found the army’s engineers had constructed six earthwork lunettes along the ridge, without connecting trenches, about a hundred yards in front of the barn. No cannon armed them because these guns and their crews had been sent forward and had already crossed the Potomac.

Having been up all night, Heth’s forces rested on the morning of the 14th, believing J.E.B. Stuart’s cavalry was behind them. Union Brig. Gen. Judson Kilpatrick came upon Heth’s troops about 7:30 a.m. Union Maj. Peter A. Weber was ordered to lead a charge with two mounted companies of Michigan Wolverines.

Seeing the cavalry, Heth’s forces at first thought it was Stuart before realizing they were enemy forces. Weber and his second in command were killed, along with many of his men. Confederate Lt. Gen. A. P. Hill described them as “annihilated.”

Anna A. McAtee sold the farm to James M. Downey, and the same day, it was reconveyed to Edward Macgill. It remained in the Macgill family until May 7, 1884, when John Barnhart purchased it for $4,000.

Three years later, Thomas C. Rowe bought 148 acres of the property for $5,673.33 and held it until 1909, when Fannie, Salome, George W. and Daniel L. Swope purchased the farm. It remained in the Swope family, who lived there simply, with few amenities, until 1971.

At that time, the farm was again divided, and the structures were sold on a 27-acre parcel. Several sales in the late 20th century reduced the land to 16 acres, and it was this parcel that Melissa Cooperson purchased in 2003 and immediately began the enormous task of restoration with partner George Franks.

The front portico had been removed and replaced with double-curved stairs, and much of the old house had been neglected. There was a lot to do. Cooperson and Franks dug in.

They had the raised seam metal roof repainted, replaced the wiring and plumbing, repointed the brick walls, rebuilt the chimneys, dug a new well and installed individual Mitsubishi HVAC units in main rooms, and central heating and air on the upper level. They replaced the portico with a replica of the earlier one, following the shadows left on the brick. 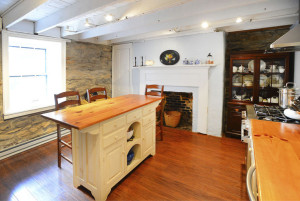 The original kitchen stands in the southeast corner of the ground level, with its original service fireplace and chimney cupboard. The pegged rafters of the floor above this area have been scraped and painted white. All the walls and the floor have been repaired, and the space has become a breakfast room.

Across the hall, the present kitchen occupies the southwest corner of the basement. It is furnished with a new stainless-steel stove, hood, deep sink and a custom-made island that resembles early wooden cupboards, giving it the warmth of an earlier period with the efficiency of a modern kitchen.

Washington County companies did all the work on the Donnelly House. Dennis Swope of Home Construction Corp. was key to seeing to the completion of the major part of the renovation. Funk Electric provided excellent advice on the new heating and cooling systems and did a wonderful job of sympathetically rewiring the entire house. All of the local craftsmen who worked on the house were supportive of restoring this local and national landmark.

The job is not finished, but most of the heavy lifting has been done.

It is in the National Register of Historic Places, and the Maryland Historical Trust has accepted an easement on the land to preserve the site of the Battle of Falling Waters.

Cooperson and Franks launched the Battle of Falling Waters 1863 Foundation Inc., as of last February. With committed local neighbors at the helm, officer and board meetings move the organization forward.

This article appeared in the Herald-Mail Newspaper, Sunday, November 30, 2014