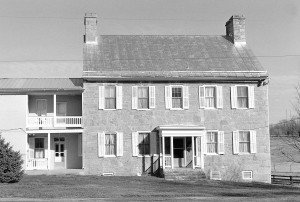 Narrow Mansfield Road winds east past quiet fields, often shaded by old trees. Sections of stone fence still stand, and black boards bind pastures. A small sign announces Kef-Poff Farm; a narrow lane plunges down a small hill and leads to a tranquil farmstead. The stone house faces south and is built into a knoll. Just to the west is a stone smokehouse and, beyond that, a stone barn and assorted outbuildings. The original entrance to the farm came from Smoketown Road past the barn to the house. It has long since been obscured in favor of this lane from the newer road. 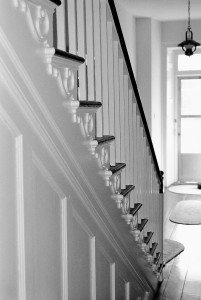 John and Catherine Miller owned this property late in the 18th century. They first built a log house, then a stone house and barn. When John Miller died in 1821, his children divided his extensive farm holdings. One of his sons Abraham received full interest in this farm. (The present owners have this 1821 deed which sons, daughters and in-laws all signed.) In 1852, Abraham moved west to Illinois. There was a succession of short-term owners until 1862, when Samuel Doub bought the farm for his son-in-law Samuel Poffenberger and his daughter Catherine.

The house is said to have been built between 1802 and 1804. It is a handsome house with quoined corners and five bays. It stands two-and-a-half stories tall and has a story-and-a-half wing to the north. This wing is built over a spring and, on its first floor, contains the original kitchen with a massive service fireplace. The exterior stone wall shows no seam between the main block of the house and the wing, but there is a stone wall between the two sections. In the wall is a cupboard built into a cavity that was once a window.

The springhouse wing opens at ground level on the north. The door is surrounded by a massive, square, relieving arch that supports the cooking fireplace in the original kitchen above. Interior stairs enter the cellar. Another outside door a few steps below grade on the west side of the wing also opens into the cellar. This Dutch door is hung on long, handmade strap hinges. About 1950 Millard Kefauver repaired the original door by cutting off its rotted lower half and building a new half door using the original hinges and another pair from a collection of old ones that he had. The framing is massive and the sill is stone. Under the main block of the house, the cellar has three rooms and another large service fireplace. The ceiling of the cellar exposes the joists of the first floor—close-set logs, flattened on top and bottom, with the spaces between them filled with small stones and plaster, forming insulation. 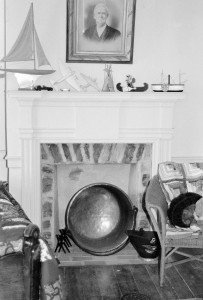 Jacob Poffenberger purchased the farm in 1854 and sold it the next year to Henry Poffenberger. Catherine Doub and Samuel Poffenberger, Jacob’s son, took a marriage license on January 22, 1861, and married two days later. On April 1, 1862, Samuel Doub bought the farm for his daughter Catherine and her husband for $11,101.29. The young couple were about to harvest their first crop when, on the seventeenth of September, the tranquility of their lives was shattered by the Battle of Antietam. The East Woods lay just to the southwest, and cannons roared. Dr. J. L. Dunn, a surgeon at the battle, reported in an October 1, 1862, letter to his wife …To be in a place where no less than 150,000 musketts are being discharged continuously then add to that 300 cannon whos roar—equal to the loudest clap of thunder—is a fearful thing, no person can have any conception of it. C. M. Welles, a missionary who worked with Clara Barton to deliver medical supplies to the field, wrote, …Not for a moment through the day had there been any cessation of the terrible sound.

Reports of the battle describe the movement of forces and the awful carnage. Buildings were appropriated, food and animals were taken and crops trampled. Sheets were shredded for bandages. But the owners of the property are seldom mentioned. Where was Catherine Poffenberger during that overwhelming, ceaseless din when her home was taken over as the stone house hospital? How did she feel when her personal possessions were taken and used? Samuel Poffenberger’s 1916 obituary reported, …During the battle of Antietam Mr. Poffenberger was compelled to leave his home which was used as a hospital for nineteen days. Unionists and Confederates were cared for there and Gen. Payne, a Confederate officer, died in the parlor. His home was the death scene of about 140 men. The spring on the farm furnished water for the wounded and dying soldiers. How do you care for crops and animals when you are gone for nineteen days? 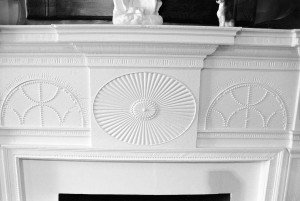 After the Battle of Antietam, Catherine and Samuel continued to live on the farm. Samuel filed a claim for a corn field that was destroyed, but it was not granted. In 1868 they paid $12,442 to Samuel Doub and received title to their property. At some point, they added the brick wing on the east. But, according to family members, they never spoke to anyone about the battle for the rest of their lives.

Edward Poffenberger, Samuel and Catherine’s son, succeeded to the property. He retired from farming at age 47 and rented the farm for the next 30 years. When his daughter Erma Poffenberger Kefauver and her husband Millard bought the place, the house needed restoration.

There was much to work with. The original windows had been replaced long ago with two-over-two sashes, perhaps when the brick wing was added; but the heavy pegged framing and the flat stone arches above the doors and windows are original. Large, stone chimneys rise inside both gables and at the end of the wing. The main entrance is in the middle bay. A reconstructed porch that was copied from an early photograph shelters it. The door is a late 19th century replacement and opens into a center hall. A large room to the right has a Victorian mantel at the fireplace. Beyond is the wing with the original kitchen, now a family room. There is a modern bath in one corner. Woodwork throughout the house is flat with ovolo trim, and both windows and doors have paneled jambs. Most doors have their large, original box locks.

On the other side of the hall are two rooms. The first, a dining room, still has its original mantel with delicate, beaded patterns. A door has been opened beside the fireplace to access the brick wing, which holds a modern kitchen on the first level and a master bedroom above.

Millard Kefauver, Jr., and his wife Nancy now live at Kef-Poff. They met in college, where they took degrees in mechanical engineering and mathematics. After their marriage, Millard surprised his wife by saying he might like to go back to the farm. Now their lives revolve around crops, the seasons and milking twice a day.

It is a peaceful life, but the shadow of the battle still hangs over the place. The National Park Service (NPS) has purchased much of the land around them to establish Antietam National Battlefield, and NPS wanted easements on Kef-Poff Farm. The Kefauvers were indignant. Their family has stewarded the farm for 135 years; the land is still being planted and harvested; the buildings are well maintained. This, they feel, is a record that the Park Service cannot equal. One NPS employee came through the house without mentioning where he worked, and went on to write a paper identifying the Kefauver’s stone house hospital as the one at which Clara Barton worked during the battle. Neither of the Kefauvers thinks this is true.

In her extensive writings, Clara Barton describes passing through a corn field to arrive at a small house on the morning of the battle. Before her was a broad porch with four surgeon’s tables set upon it. Throughout the day, she saw General Hooker’s troops retreat again and again to the protection of the artillery line. The stone house is not small, even without the brick wing; and the Kefauvers point out that the field between the barn and the house is too rocky to grow corn. In addition, the historic Carmen-Cope* maps show no corn field there. There is no broad porch now and no physical evidence that one ever existed. Nor, say the Kefauvers, could the battle have been viewed from the house. It is a tenuous match.

The conflict between private use and public preservation continues to play out in an understated way for the Kefauvers. The park and its visitors impinge on the way they live as do the changes to the roads and landscape that the Park Service proposes from time to time. The Kefauvers have sold the development rights to their land to the Maryland Environmental Trust, preserving it as a farm forever. Reverberations from the dreadful battle are nearly gone.

*Carmen-Cope maps: In the 1890s, the Antietam Battlefield Board authorized fourteen sequential maps showing troop movements during the battle. These maps were surveyed by Lieutenant Colonel E. B. Cope, and troop movements were researched by historian of the Battlefield, Ezra Carmen. Carmen wrote to hundreds of veterans of the battle to determine the movements of the various units involved, and the Battlefield Board paid for some of these veterans to revisit the site and describe the action in which they were involved. Carmen-Cope is a nickname for the Maps of the Battle of Antietam.

This article appeared in the Herald-Mail Sunday, September 7, 1997 as the 95th in the series.