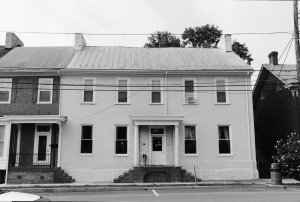 Around 1750 a trading settlement was established at the confluence of the Conococheague Creek and the Potomac River at the point where a prominent 18th century highway ferried the river. In 1787, the town of Williamsport was formally created by Revolutionary War General Otho Holland Williams, who platted over 200 lots and incorporated the town with an eye to …the great prospect of navigation of the said river being extended to tide-water. The main streets were to be no less than 80 feet wide and the cross streets not less that 60 feet, most generous even by today’s standards. General Williams lived in Baltimore, while his brother Elie (pronounced Ee’lee according to a descendant) Williams promoted his interests in Washington County. Lots were not sold but were leased for 99 years, with the right to renew the leases forever. 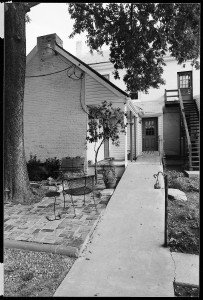 In 1790, Elie Williams leased lots seventeen, eighteen, nineteen and twenty for twenty pounds. The terms of the leases required that, …within the term of two years from the date of these presents (he will) enclose the said lots of ground with good post and rail or pale fence, and that the said Elie Williams his heirs executors administrators or assigns shall and will before the first day of May 1799, erect and build on the said lot or portion of ground a House of Brick or Stone, frame or hewed logs at the least 20 feet by 26 feet in the base with a good chimney of Brick or Stone, And, if not done, Otho Holland Williams may reenter and take possession of the said lot. The lease also provided an annual rent of …three bushels of good merchantable wheat or an equivalent for the same in current money… for each lot.

Williams sold his interest in lots nineteen and twenty in 1794 for £60, and the next year he parted with lot eighteen for the same five pounds it had cost him. In 1798, Williams sold the lease of lot seventeen to Amos Davis, his brother-in-law, for £550, …£250 before the 1st day of April next; £50 annually each April 1… At some time between 1790 and 1798, Williams must have fulfilled the terms of the agreement and built a dwelling on this lot.

The two-story, five-bay brick home that stands on the western half of lot seventeen has a number of 18th century features: a molded brick water table across the front façade; the transom above the main entrance is made of two pieces of old glass butted together and held in a simple rectangular sash; several six-panel interior doors have the high profile typical of 18th century carpentry; and most of the architraves surrounding the first floor doors are decorated with crossettes. 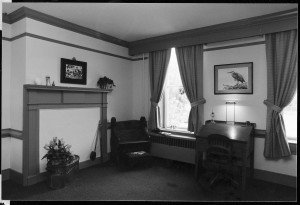 Amos Davis sold his interest later in 1798, and the lease was resold again four years later. In 1815, Matthew Van Lear, who owned considerable property in the area, purchased it for $3,000. The house was to remain in the Van Lear family for 50 years. In 1865, Charles and Theodore Embrey purchased the property from Van Lear heirs for $1,200. The Embreys, father and son, were heavily invested in Williamsport real estate, and this property became the home of Theodore. He was superintendent of the Williamsport division of the C&O Canal, then joined his father as a merchant and shipper and later became a canal forwarder, according to T. J. C. Williams’ History of Washington County, Maryland.

Embrey died in 1887. His house was advertised as the west part of lot seventeen, a …Two Story Brick Dwelling with stone back building containing 10 rooms and cellar also carriage house, stable, corn crib, cistern etc. The lot has choice grapes and fruit trees… quite a bit to put on a 49 foot, nine inch by 192 foot lot. Sarah Embrey, his daughter, bought the eastern sixteen foot, three inches of lot seventeen with its attached brick house for $860, while the main dwelling sold for $1,600. The interior door between the two houses was sealed. 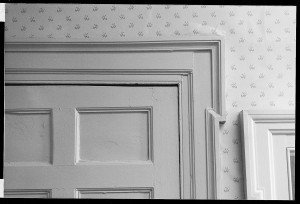 The stone back building is no longer there, but there is a summer kitchen with its overhanging porch roof that has been gutted and transformed into an apartment. The basement has had its interior entrance removed in order to shore up the joists under the main section of the house and is now entered from a bulkhead in the back. A modern brick stoop with two flights of stairs leads to the elevated main entrance in the central bay of the front façade. Within an ample entry hall, a staircase on the right rises gently into the attic. The balusters are slender and square, and the handrail is round. Much of the woodwork in the house is original. Recently the property was a doctor’s office with an apartment upstairs as well as the efficiency in the old summer kitchen.

Sharon Raun has just fulfilled her dream by buying this old house. It has been an exhilarating, and sometimes disappointing, experience. She needed to replace the windows, since most of the sashes were two-over-two sashes that had long ago replaced the originals, and she ordered the six-over-six sashes that would be appropriate for her home. She was devastated when the contractor instead delivered single pane sashes because they were less expensive. But the pluses far outweigh the negatives. She has rented the upstairs apartment as well as the efficiency and has made the first floor doctor’s office her home.

Sharon has laid old bricks under a tall shade tree in the back yard to make a patio and has even added a tiny pond with a fountain. A new kitchen is almost completed in the back room of the house. Layers of linoleum were removed to expose the old wood floor in this space. The board was removed from across the fireplace in the room in front of the kitchen, only to reveal a shallow firebox with a curved tin lining. The replacement oak floor extended into the firebox, indicating that this was only a decorative addition. The tin lining will be carefully removed and the earlier firebox examined. Just the barest hint of another metal lintel shows above this one, so there may have been a third, even larger firebox here originally. Old houses always pose mysteries for their owners. It’s part of their charm. Sharon has a lifetime of puzzles to try to understand.

Epilogue: By recycling old Cushwa brick from a cistern that was on lot eighteen, the patio was completed with the addition of a larger water garden. A Zen garden extends off the patio with a butterfly garden beyond where the carriage house, stable and fruit trees once stood. After removing a wall in the dining room, the room is back to its original size. Removal of four layers of carpet, foam and glued tarpaper exposed the original random-width pine floor in the living room. This also revealed the original brick hearth with mitered oak trim. Since the current oil-fired furnace is vented into the original limestone chimney and plaster closes the firebox, a faux fire fan was painted on the plaster.

Painstaking work continues on the original pegged and faux-grained wood doors which are stored in the dirt-floored basement. Removal of a receptionist’s window in the foyer revealed the two-layered interior brick walls. This window was filled in with old Cushwa brick. Seven layers of carpet, linoleum and particleboard were removed from the two-inch oak flooring in the foyer. The work goes on.

This article appeared in the Herald-Mail Sunday, August 3,1997 as the 94th in the series.