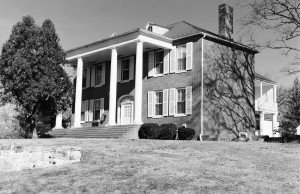 High on a cliff above the Potomac, an imposing brick home stands sentinel across from Shepherdstown. Early settlers coming down the valley from York, Pennsylvania, forded the Potomac at Packhorse Ford, about a mile-and-a-half south of this cliff. As time passed, a better means of crossing was needed; and, in 1765, Thomas Van Swearingen established a ferry between Maryland and Shepherdstown. He charged three pence for each person and each horse that used his services. 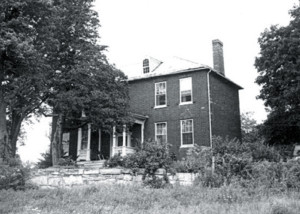 The will of Benoni Swearingen, an heir of Thomas, was probated in 1798. In it he divided his estate among his wife Hester, his daughter Sarah, who had married John Blackford the year before, and his son Henry Thomas Swearingen, a minor. By 1801, Hester had married John Good, and John Blackford made his first purchase from the estate that Benoni Swearingen had left by paying the Goods $200 to give up exclusive rights to a lot of land near his garden. Sarah Blackford died in 1805, when she was not yet 25. Her estate was inherited by her only living child Benoni, subject to a life estate for his father.

John Blackford owned a large farm south of the ferry but lived at Ferry Hill, which is believed to have been built in 1812, the year he married Elizabeth Knode. Blackford entered in his journal the …Expense (for) Building Dwelling House & Barn…$8,365.62 1/2. Blackford’s son Benoni died in 1816, and it was in that year and the next that he purchased the ferry as well as several other properties from his former brother-in-law Henry Thomas Swearingen. 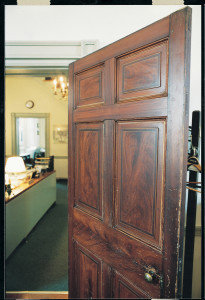 John Blackford was a man with many interests: businessman, landholder, justice of the peace and supervisor of the public roads in his district. He was the captain of a volunteer company in the War of 1812 that was dubbed the Bladensburg Racers for their poor showing during the Battle of Bladensburg. Blackford’s reputation must not have suffered from his troops’ behavior, for he was later made a colonel.

John Blackford ran the ferry from 1816 until his death in 1839. He kept extensive records, and some of his journals still exist. In one, Blackford records his daily activities in the year 1838 and part of January 1839. The Ferry Hill Plantation Journal gives a detailed picture of the life of a wealthy landholder and his family. Frequently guests dropped in, stayed for meals or remained in the household for weeks at a time. Few days passed without company. Guests would come to warm themselves, to escape from bad weather or for business; but most visits were social. Time was spent arranging transportation, borrowing horses and managing work schedules. Ice was cut and stored in the icehouse in the winter; fields were plowed, plastered (limed) and planted, and grain was threshed both by machine and by hand. The seamstress often came from Boonsboro to make clothes for all. Several times clothing was cut elsewhere and given to the seamstress to assemble. 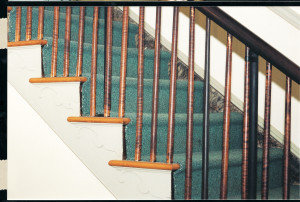 Blackford gave slaves a great deal of autonomy. Ned and Jupe ran the ferry without supervision, collected the fees and made purchases. Slaves labored with freemen and family to do the work of the plantation. They were treated with concern and given the same health care as the family. Clothes were made for them as needed, and Blackford would indulge them in whiskey and tobacco. Sunday did not appear to be a day of rest for the workers on the plantation, but there was some lessening of activity. The ferry always operated, and Ned was almost always there although Jupe sometimes worked at other tasks as well. In his will, Blackford’s concern was expressed, …It is my will and desire that care shall be taken to prevent any of my slaves being sold out of the State or to slave traders or their agents unless for gross faults or to any but humane and good masters.

The inventory of Blackford’s estate is recorded in two parts. The first part lists sixteen slaves by name and estimated value. The second section of the inventory appears to be items that were missed the first time. There are a number of stocks, watches and miniatures listed which were probably kept in a safe; and Edmund (Ned) and Jupiter (Jupe) who were down at the ferry. John Blackford’s journal refers to payments to Mrs. Swearingen (Good) from the ferry income, and this transaction is further explained by his will which mentions …the undivided …or half part which I have lately purchased from the widow and heirs of Thomas Van Swearingen the purchase money of which is to be hereinafter paid out of my Estate at large. 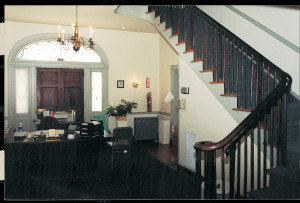 Ferry Hill was built facing west toward a great loop of the Potomac River. It is two stories high and five bays wide, with an imposing portico held by four two-story columns. This façade is laid in Flemish bond, with other brickwork in common bond. The central entrance has a broad, elliptical fanlight and sidelights with curvilinear muntins. An elegant brick cornice band decorates the wall just under the roof and two dormers with arched top windows light the attic. To the rear is a seven-bay ell with a double porch on the south side.

The main entrance opens into a broad reception hall. A second door, at the opposite end of the hall, exits onto an enclosed porch across a stone threshold. The two exterior doors are quite broad, made with two stiles in the center as if the doors were double or folded in the middle. The rails at top and bottom of the doors, however, are continuous, so this was never the case. These doors and the ones to the rooms on either side of the hall are superbly grained to imitate mahogany with banded inlays. There is a massive brass box lock on the main entrance door and a similar lock in iron on the rear door. The stairway to the left of the hall has simple round balusters and delicately scroll-cut step brackets. Scroll-cut trefoil arches are applied to the rounded stairwell at the second level. The balusters have been grained to imitate tiger maple. Woodwork is molded with corner blocks.

On the right of the entrance hall is a large parlor with an original fireplace mantel, paneled window jambs, grained doors and marbleized baseboards. The room on the other side of the hall also has an original fireplace mantel but it is smaller in size. The back wall of the main block of the house does not continue across its juncture with the ell. Instead, the front room of the main block was shortened, and the room behind it straddles the two wings. This room also has an original mantel, cast-iron firebacks and a double-doored cupboard beside the fireplace. These doors and the one leading into the front room have the inlaid mahogany graining, but the door entering from the hall is exuberantly grained to imitate tiger maple. 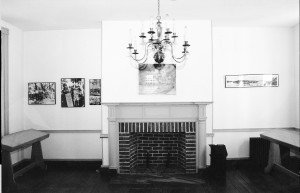 The upstairs floor plan mirrors the first floor in most respects, but much has changed over time. There is one original closet, only a foot or so deep and sporting a peg rail fitted with short, turned wooden pegs. Closed stairs lead to the attic. Rafters, scribed with Roman numerals and pegged together, carry the metal roof, but a few of the original shakes are visible around the dormers. There is also a single piece of 18th century ogee molding, still with its original blue-green paint, reused in one of the dormers. The roof of the front section is hipped, and the rafters supporting the back slope of this roof are scarfed into the plate and into short posts in the attic floor above the juncture with the ell.

In 1848, John Blackford’s son Franklin sold Ferry Hill to the Reverend Robert Douglas for $16,000. Douglas, a widower, had married John’s daughter Helena. Thus Ferry Hill’s most famous resident, Robert Douglas’s son Henry Kyd Douglas, came to live on the bluff over the Potomac during his adolescence. H. K. Douglas enlisted in the Confederate Army and kept extensive journals. Late in life, he wrote I Rode With Stonewall about his experiences as a member of Stonewall Jackson’s staff. After the war, the younger Douglas became a prominent attorney in Hagerstown. He eventually acquired title to Ferry Hill after his father’s death, but did not reside there. When Henry Kyd Douglas died unmarried in 1903, the farm passed to his sister Nannie Beckenbaugh and remained in that family until 1951, when it was sold to Frederick W. Morrison. The Beckenbaughs established a restaurant in the house during the 1940s, and Morrison continued this enterprise. The first floor of the ell was opened into a single room for the restaurant, and Morrison added the imposing portico and columns on the front of the building. 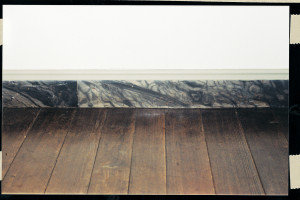 When the C&O Canal National Historical Park was established, the National Park Service purchased the property; and the house eventually became the headquarters for the park. The building serves as office space and is not open as a museum. However, if you happen to have to visit the National Park Service, be sure to look closely at the grained doors, the original mantels and the elegant woodwork. John Blackford’s home is still a special place.

Epilogue: National Park Service C&O Canal Headquarters will move from Ferry Hill to Hagerstown office space in January 2002. Recently a complete evolutionary history of the Ferry Hill structures was completed, describing the way these buildings have been used and changed over time. An historic structures report will follow. Plans are evolving for the restoration of these buildings and of the site. The manor house will be returned to its early configuration. This restoration will probably include removing the mid 19th century porch and columns that face the river.

A draft landscape management report has been done. This report describes changes in land uses from 1800 to the present and will result in a land management plan. Vegetation on the slope from the manor house to the canal will be removed and some of the lawns will be returned to meadows to make the scene more historically accurate.

In the spring of 2002, the National Park Service will begin offering weekend programs at Ferry Hill on early plantation life, settlement history and the relationship of Ferry Hill to the C&O Canal as well as the Civil War history of the site. Ferry Hill is in transition.

This article appeared in the Herald-Mail Sunday, March 2, 1997 as the 89th in the series.