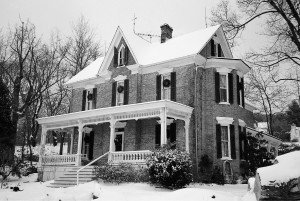 When J. Mitchell Stover assembled his tracts of land near Edgemont, there were already several structures there: the stone mill that had been converted into a distillery, a barn on fieldstone foundations, a small stone house built over a spring and the mill pond. Edgemont was a new community growing up around the Western Maryland Railroad spur that was opened in 1881 to connect the main line with Waynesboro. Stover’s property abutted the spur, and he intended to use this transportation.

Between 1881 and 1896, the land records of Washington County show dozens of transactions involving James Mitchell Stover–deeds, mortgages, leases, deeds of trust and equity cases. T. J. C. Williams in his History of Washington County, Maryland called Stover a …pioneer peach grower. In 1891 Stover, with six other men, chartered the Blue Mountain Peach Company of Washington County …for the purpose of growing, cultivating and selling peaches, peach trees and other fruits and fruit trees and of purchasing lands and acquiring leases of lands for the purposes of planting such lands in fruit trees and of selling…both fruit and young trees and operating nurseries…and of packing, drying and shipping fruit. The charter went on to say that the principal office of the corporation would be located at Edgemont and that capital stock would be $50,000 divided into 500 shares with par value of $100 each. 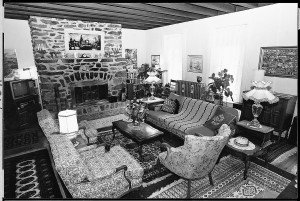 While the Edgemont property was used as the headquarters of the Blue Mountain Peach Company, it was also Stover’s home. It was there, on a hillside terraced with stone walls below and above, that Stover built his three-bay brick home next to the millpond in 1888.

The house, three bricks deep and resting on massive stone foundations, has a T-shaped footprint and a steeply pitched cross gable in the central bay. This gable has a pointed Gothic window with two vertical lights. Three-sided bay windows are on either side of the house, a one-story bay to the north and a two-story bay to the south side of the house, both made of shaped bricks that allow the bay corners to be laid seamlessly. The front porch extends the width of the house and is supported by large brick and stone piers projecting from the main foundation. It has a spindle frieze and a low balustrade with turned posts. The rear wing of the house has a single-story porch on the west side and a double-porch on the east side with original scroll-cut splats in the upper balustrade. Doors and windows are topped with peaked architraves that penetrate the broad cornice treatment on the second level.

The entry, in the middle bay, opens into a hall with a stairway on the right. The closed stringer staircase has a low balustrade with a heavy handrail and short, turned posts. To the left of this hall was the original library with a fireplace on the interior wall fitted with a lovely cherry mantel. The floors are old growth pine, the woodwork is fluted with bull’s eye corner blocks. The baseboard is deep, with twelve inch tall plinth blocks where it meets the casing. All of this interior millwork was originally faux-finished over softwoods to simulate more exotic species. Much of this graining is intact and in excellent condition. 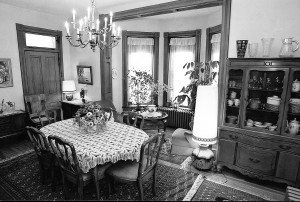 On the other side of the hall, the dining room is laid out in a similar manner with an equally elegant mantel guarding its fireplace. The great room at the back of the house, spanned by dark beams, is entered from the hall and the dining room, as well as from the porches on either side of it. At the far end of the room is a massive stone fireplace with a chimney that is nine feet wide and extends four feet into the room. The firebox is not unusually large, for recent owners have rebuilt it.

There was no kitchen in this house originally. Rather, food was cooked in the summer kitchen, a small, two-story frame structure just to the rear of the house, and delivered to the dining room by servants. The present owners Kenneth and Greta Graham have converted the library into a spacious and comfortable modern kitchen to remedy this problem. It appears that the house was whitewashed originally with all the mortar joints painted with a very slender line. This detail shows in areas behind the summer kitchen where it was covered.

Four chimneys with multiple flues allowed almost every room of the house to be served by small coal stoves vented through wall thimbles. The center hall design allows air to circulate all the way to the third floor. Cast iron grates in several areas serve some type of primitive supplementary duct system between floors in the masonry walls and chimney walls. The purpose of this system isn’t clear.

The stone cottage is a story-and-a-half. It has roughly coursed stonework with quoined corners and a south-facing porch under the main roof span protecting two front doors. Two small, arched dormers pierce the roof on this side and one on the other. In the basement the spring that supplies the complex with water bubbles to the surface. This small building has been converted into a charming rental home. Beyond the cottage are the stone foundations of a bank barn long since gone.

Stover’s 1894 tax bill shows him owning almost 640 acres of land and with his property valued at $8,944 on which he owed $82.97 in taxes. (The total assessable basis of the entire county was $19,760,048 for that year.) Two years later, the peach company went into receivership; and the property was sold at auction in April. The notice in the paper read: 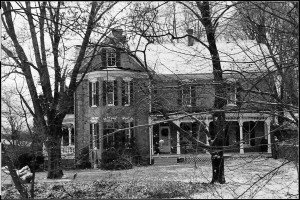 Sale of A Valuable Farm situate at Edgemont, Washington Co.

The land is improved by a BRICK DWELLING HOUSE, heated by furnace within the house, two tenant houses, a bank barn with water at hand, a building now used as a canning factory. there is a good spring and running water through the farm. the land is well set in orchards of peach, apple, apricots, grapes and berries. and the prospects for a good crop this year is excellent, and its proximity to the railroad station at Edgemont, makes it very desirable…

A March 2, 1896, letter from Stover to the receiver of the Blue Mountain Peach Company reads in part,

…I expected the Haines farm would have brought more money but I am satisfied that it was the best thing to let it go. Have not heard yet what the Wolford farm brought. I understood you that the Home farm would not be offered til fall which would have given me a chance to rent it this summer and give me a start. but it may be as well to sell it now if my brother can see his way clear to buy it. if not I would like you to hold it and give me a chance to rent it til fall. I will be home by March 15th and we can considder better what we can do…

I have had a good time since here. The weather has been delightful. Peaches and pear in full bloom and the Mocking birds are singing all the day.

There has not even been any frost for the last ten days and farmers are planting corn and cotton.

I had a bad cold when I came here but it all disapeared in a few days. I feel about ten years younger.

The letter was written from Fort Valley, Georgia. Perhaps Stover started over there. The only mention of J. M. Stover in the Washington County land records after 1896 is a sale he and his wife made in 1910. 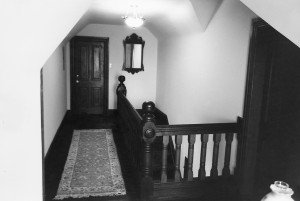 Samuel B. Loose (rhymes with dose) purchased the Edgemont property at the auction for $83.20 an acre. He continued the orchard operation, converting the canning factory into a packinghouse and spending summers in the house. The farm remained in the family until 1973 with several generations of Looses and Lanes spending summers on the mountain, playing tennis on the court near the millpond and watching the steam thresher work. Elise Loose Lane kept the house during the depression by taking in wealthy boarders from Baltimore during the summers. Her cook Martha Washington lived over the summer kitchen and prepared food for all the guests.

The Grahams have taken good care of Stover’s mansion, and it has provided them with a lovely, well-built home. Stover would be pleased.

Epilogue: Linda and James Stayer purchased Stover’s Manse in 1998. “As caretakers of this well built home, we are dedicated to maintaining and improving it for future generations. Though very much habitable when purchased, much work needed to be done. The double porch on the east side, in great disrepair, has been removed and a new kitchen addition is replacing it. A needed investment in roofing is soon to be made on the main structure. Making the house meet our individual needs in a new century has been slow, but steady and satisfying endeavor.”

This article appeared in the Herald-Mail Sunday, April 2, 1995 as the 67th in the series.