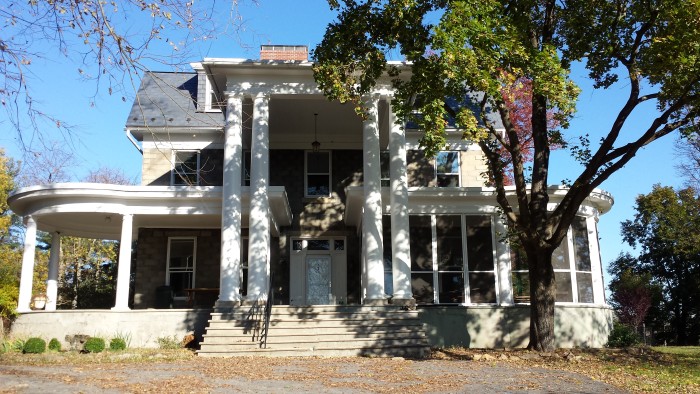 West of Hancock, a private driveway turns off Main Street and climbs a steep hill to an imposing home set well back from the road. Two-story coupled columns carry a portico above the entrance to the mansard slate roof, while two lower porches with smaller columns flare beyond either side of the house from under the portico. A handsome transom made of clear bevel glass is held by lead cames. Sunshine Hill is built of large, regular blocks, handmade of concrete, that are finished with shallow vertical striations simulating saw marks. These are pointed with beaded mortar joints. The corner blocks were cast with a raised flat panel, and lintels and sills are single, plain rectangular blocks. Houses of concrete blocks mimicking stone were widely advocated by early 20th century pattern books as a novel new building method.

On the recommendation of a friend Marie Louise Paine, the only child of a wealthy New York surgeon, came to Berkeley Springs, West Virginia, where she took a cottage. There, she met and married Rinehart Cohill and in 1910 they built Sunshine Hill on a 40 acre parcel of land near Hancock. It was a copy of Marie’s Grandfather McKenzie’s house in Mayville, New York, where she had often spent summers. 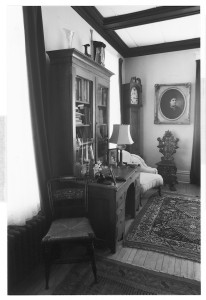 Three days after moving into the house, a workman had an epileptic seizure in the basement. The cigarette he dropped ignited excelsior packing that had protected the furniture during shipping, and the house burned to the ground. A few pieces of Marie Louise Cohill’s family treasures were saved, legs broken from being thrown from windows to escape the flames. The Cohills began again, building the same house over, changing only a few details. About the time the second house was being finished, their daughter Adele was born. Adele Donnell lives in the house as she always has, now sharing it with her husband Ralph.

The main entrance to the home is now a solid, paneled door with flanking solid panels. These panels replaced the original leaded glass door and sidelights. It enters a large living room that is the full width of this five-bay house. Slightly to the left of center, and opposite the door, is a fireplace with a tall, simple mantel whose shelf is supported by round columns. To the left of the fireplace is a stairway with solid square balusters supporting a simple handrail. To the right of the fireplace a door and a square archway open into a large dining room that extends to the back of the building. Windows on two walls fill this room with light. The floors are maple and the ceilings crossed by oak-clad beams.

The rear quarter of the first floor, behind the living room and to the left of the dining room, consists of the kitchen, a butlers pantry and a half-bath. The rear stairway to the second floor rises from a small, map-filled room. This area retains much of its original detail while providing functional work and storage spaces that are quite charming.

The basement, accessed both from the stairs off the kitchen and from a rear bulkhead, is finished and contains several utility rooms now serving as furnace, laundry and shop spaces. There is also a very modern computer area where Ralph Donnelly spends a great deal of time. He chortles that sitting in his chair, under asbestos-wrapped pipes, next to lead-painted walls and breathing radon emanating from the floor, gives him extra vigor. At 85 he may be right. 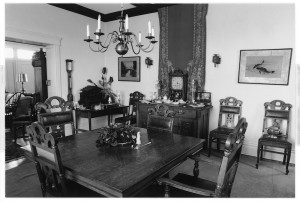 The house is furnished with family pieces that have family stories. A graceful walnut secretary once belonged to Adele’s grandfather E. P. Cohill. Grandfather Cohill was sitting on one of two walnut logs near his sumac mill when the mill’s boiler exploded and threw the other log over his head. E. P. took the logs and had them made into the secretary. (Sumac leaves were gathered and ground for use in the tanning industry.) In the dining room a large, intricate Alpine house model is filled with detail. A woman stands on its balcony putting bedding out to air; cats, dogs, woodpiles and a workman fill the scene. The center of this wonderful diorama then folds back on hinges to reveal four, small cut glass wine decanters and a set of matching cordials. The right side hides a humidor and an internal music box that plays Austrian tunes.

A small, glassed-in porch off the kitchen exits to the back yard down a set of steps. A straight walk, flanked by tall lilac bushes, leads to a barn also built of the same handmade concrete blocks. Here are two garage spaces and six stalls for horses. The yard is filled with mature trees now. It is pleasantly shaded, unlike the open corn field in which Marie Louise Cohill first built and named her house, and unlike the apple orchards that Rinehart Cohill later planted around it. It is a serene and comfortable home.

This article appeared in the Herald-Mail Sunday, February 5,1995 as the 65th in the series of articles by Patricia Schooley about the historical homes of Washington County.