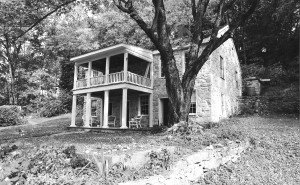 Bowie Road is a single lane that follows the path of the Potomac below Taylor’s Landing Road. There, set back from a grassy swale that once was the C&O Canal, is an old stone house built into the bluff along the river. The flat flood plain of the river’s edge ends in a bank, that forms the back of the house, as it rises abruptly. There is a small, new building to the left, and behind it is part of an old stone wall built against the base of the cliff as if to support it.

A double porch extends from the front of the house, comfortably wide for commodious outdoor living space on both levels. There are three windows with six-over-six sashes on the first level, and also three front doors. Oral history says that the building was once a tavern, hence the three doors; but no records have yet been found to support this tradition. Rough stone lintels sit above the doors but not the windows. Each of the doors has paneled jambs; and both the windows and doors have heavy wood frames with wide beads on the outer edges, typical of 1780 to 1800 building construction.

When Larry and JoAnne Grimm purchased the house in December, 1987, it had been a summer home for decades and unused entirely for the past two years. The flood of 1936 had seen water rise to the second level, the floor of the first story had been ruined, the second story floor had a serious sag in it and roots grew through the wall into the second floor kitchen. The roof was covered with metal, corrugated in front and raised-seam in back. It leaked severely. A large double porch, with tree trunks for posts, wavered across the front of the house. When the pointing had failed, former owners had covered the exterior with a mud-based parge and had then painted it white. However, a fair amount of old woodwork survived, and the setting was charming. This, then, would be their retirement home. And so the project began.

Larry is a mechanical engineer by profession and a woodworker by heritage. For years he and JoAnne dealt in antiques. They brought a lot of expertise to the job. The roof was replaced with cedar shakes to replicate the original that had been found under the tin. The parging was removed and the stones repointed. The porch was pulled down and a new one built using the shadows that remained from the original as guides for its shape. Simple square pillars now support the double porch and its roof. The interior floor of the ground level was excavated. A new slab was laid and insulated with water resistant foam. Then random flooring was laid. The cliff-side wall of the house presented special problems in waterproofing, but these were also overcome with modern products.

A wall running from gable end to gable end divides the ground floor of the house. This wall had rotted and had caused the second floor to sag, so it was replaced with cement block. The central door is now the entrance to the house, and the other two exterior doors are permanently closed. Larry has built closets on the other sides of these doors, both to supply the downstairs with storage space and also to retain the interior look. Originally, doors stood in these areas of the rooms. They still remain as the doors to the closets that Larry built.

The main entrance opens into a living area with a bath and utility room beyond the block wall and a guest room to the right. A chimney column between the living area and guest room serves fireplaces in each. The mantel and paneled surround in the main room are original to the house, but the simple mantel in the guest room is probably later because there is evidence that the fireplace was once a large cooking fireplace. Larry has manufactured paneled wainscot in the main room that ties beautifully with the mantelpiece. The original ceiling of this level was just the bottom of the upstairs floorboards. Now, soundproofing has been added to this ceiling and dry wall hung between the beams that remain exposed.

The simple stairway rises opposite the entrance; and, in each riser, there is a small hole. After years of wondering, a friend of past owners arrived to explain that Christmas lights were strung in those holes to guide residents up the steps after nights of celebrating.

Upstairs are the master bedroom and dining room on the left of the central hall and the bath, kitchen and living room on the right. The hall leads to the upper porch in the front and out onto the bluff in the back. Behind the kitchen is a cistern built into the cliff. This cistern was once supplied by the downspouts from the house. A former owner had installed a piece of clear tubing from the cistern through the stonework and up the kitchen wall so that he could tell how much water there was in the tank.

Larry has milled new moldings to match the old in the upstairs and has created a wide arched opening into the dining room. Here, wall panels have been created with moldings and decoratively finished with a rag-on faux finish. The hallway has a similar treatment—rag-off. Larry learned fine faux finishes from several professionals and has treated doors and woodwork as faux mahogany.

In the kitchen, Larry built cherry cupboards with raised panels and doors slanted in toward the ceiling. The floor is painted the original ochre, stenciled and then glazed. An old electric stove, enameled gray and white, stands on four legs, with a clock rising from the top of its oven. This delightful Westinghouse Automatic with the Flavor Zone Oven was left in the house, and the Grimms fell in love with it, thought it too good to junk.

Larry has separated the back of the hall from the more formal front part of the second floor by flanking it with two large, fluted columns salvaged from the Latrobe County, Pennsylvania, Courthouse. He also designed a formal, boxed crown molding from shadows he found on the wall and a great deal of study of old architectural pattern books. Finally, he was able to create the proper shape and proportion for the molding. A small bar was removed from the kitchen pantry and has been reused at the entrance of the living room.

John Frye, historian of the Western Maryland Room, in the Washington County Free Library, has always thought this building was older than the canal; but nothing has been found to explain it, or its odd three front doors. John’s wild guess is that it might have been constructed for The Potomac Company, a company chartered in 1785 by George Washington to make the Potomac navigable. There is no major stream near the house intersecting the Potomac and no early trails led past the house. Remsburg Road, roughly parallel to Bowie Road at the top of the bluff, appeared on 1780 maps but is not near enough to the house to explain its existence. Perhaps this house was built to serve people who were working or traveling on the river. There are no answers now, just lingering questions about this old place built on part of the tract called Long Sought.

The Grimms finally moved into their home on  March 23, 1994. There is much to do—yard work and plantings, a deck to be built around the outcrops beyond the second story exterior door, painting and faux work. But life is a vacation when you live on a bend of the river, a life Long Sought.

Epilogue: The stone wall built into the bank behind the house has been reconstructed, and the Grimms are now in the process of rebuilding the wall that follows the walkway to the rear of the house on its left side. Reproduction Delft tiles around the tavern room fireplace and a few cosmetic changes have been made within the house.

This article appeared in the Herald-Mail Sunday, November 6, 1994 as the 62nd in the series.