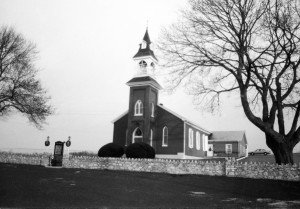 Old Forge Road wanders east from Antietam Drive into farmland and crosses Antietam Creek over a three-arched stone bridge. Two miles farther, a small country church appears on the left, surrounded by tilled fields. A stone wall along the road and a fence on three sides enclose the churchyard; and across the road, near a collection of farm buildings, a small cemetery is filled with the graves of earlier church members.

St. Peter’s German Evangelical Lutheran Church is one of the oldest congregations in Washington County and was probably formed before 1747. Robert Downing’s 1754 will states, …I give and bequeath to my beloved daughter Esther Downing all that tract…of land…113 acres, excepting ten acres, to be laid out for and convenient to the meeting house, providing the people that resort to the said meeting house to pay for it… indicating that, at that time, a church was on the banks of the Antietam Creek near the present site of Trovinger’s Mill.

In 1787, the congregation removed two miles east of the original church to its present site, and a log church 25 feet by 35 feet was built. The church had galleries on three sides, a pipe organ and a goblet-shaped high pulpit with a sounding board above. A schoolhouse with an attached dwelling for the teacher stood north of the church. Services were held in German until about 1828.

The land upon which the church stands, part of the tract called Gleanings, was owned by the Beard family, hence the common name Beard’s Church. The congregation considered two locations–the present site and the farm then owned by George Bachtell. Two lads, Peter Beard and Michael Stephey, drew cuts to decide. Since Peter Beard won, it was called St. Peter’s and built on what is now called Old Forge Road. If Michael Stephey had won, it would have been St. Michael’s Church and located on the other parcel of land.

The present brick church was built in 1863 for $1,600. In 1891, an ancient walnut tree fell on the church, damaging the gable end. When this was repaired, a bell tower was added; and the altar rail, pulpit, lectern and altar were all made of lumber from the fallen tree. It is a tidy church, well cared for, well loved. A fresh coat of red paint covers its bricks; trim is bright white. All the windows peak to Gothic arches and are filled with stained glass patterns. The bell tower dominates the front of the building, where it provides an entrance chamber for the church and the high, open tower that holds the bell. Bell ringing is limited to a special few, for if the rope is pulled too hard, the bell will overturn; and some brave soul will have to clamber up into the tower to right it once again.

The stone sill from the entrance of the first church along the Antietam was removed and placed in the doorway of the church on Old Forge Road to signify the link between the old and the new. Beyond this ancient sill is a double rank of simple wooden pews flanking the center aisle. An organ and choir benches sit behind the rail on the left of the elevated sanctuary. A simple arched recess rises behind the altar. The gifts of the fallen walnut tree are still there, and a wooden sign with movable characters hangs on the right announcing the membership and the attendance at the last service. Behind the sanctuary, at the rear of the building, a modern addition houses function space and a kitchen area. 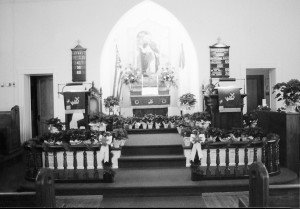 Because congregations were small, churches often shared ministers, and Beard’s Church did this from its beginnings. In 1880, the Leitersburg Parish was formed with Beard’s Church and St. Paul’s Church of Leitersburg. Jacob’s Church was once included in this parish as well. Each congregation maintained its own church and shared in the cost of the parsonage and the salary of the minister. When Jacob’s Church was closed because its congregation had diminished to just a few members, ownership of the building reverted to the Synod. The Synod in turn gave it to St. Paul’s Church, and it was subsequently sold to a nearby farmer. He was unable to secure the building. It was repeatedly vandalized until it finally was razed in 1990.

Easter of 1990 brought the dissolution of the long association between Beard’s Church and St. Paul’s Church of Leitersburg. With only 66 members, many of them old, there was great concern among the congregation at Beard’s about the survival of this historic church. Even though they do not have a regular minister, they have undertaken to enlist new members and have had several confirmations since the separation; but they wished to secure the fate of their church building should the congregation not survive. For three months, they negotiated with the Bishop and with the Washington County Historical Society. Finally all parties approved a new constitution. This constitution states that if the congregation ceases to exist, title to the church and cemetery passes to the Washington County Historical Society, Inc., and places all remaining monies in trust with the interest to be used to maintain the property. Seeking every possible protection, Tom McCleaf, Lay President, and Tunis Lyon, Treasurer, are pursuing certification as a National Historic Site. This congregation not only looks back to the very beginnings of the county but has the foresight to protect this history for future generations.

The little church has survived the hard times. After some time without the services of a regular minister, the Reverend Martin L. Rothenberger agreed to preach at services each week; and fifteen new members were added to the roll in 1993. With enormous effort and love, the congregation celebrated its 250th anniversary and strives to survive and prosper in the 21st century.

Epilogue: The congregation has added air conditioning and a public address system to their church. The steeple has been repaired and restored so that the bell is now secure in its position, and church membership has increased tremendously to 111 with attendance averaging 60 to 65 and prospects for more new members.