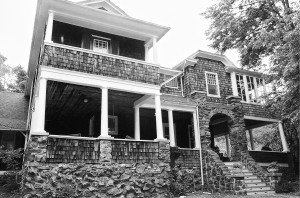 Turn of the Century shingled cottage with native stone foundation was the only home ever owned by Dr. Walter Reed. Photo by Kevin G. Gilbert/Herald-Mail Company

Mount Quirock rises steadily in the northeastern corner of the county, cloaked in forest and dot-ted with homes built at the turn of the century as escapes from the heat of summer in the cities. Near Cascade a nine acre parcel of land is suspended above the road on a western slope of the mountain. A panhandle that stretches to the road once provided access to this secluded hideaway, but is so precipitous that it is now just a walking path called Jacob’s Ladder. Cars drive more sedately up the mountain at a slant on yet another road that changes into a private lane and ends at Keewaydin, a turn of the century stone and shingle home called by an Indian word meaning west wind.

In 1899, Major Walter Reed purchased a little over six acres of land from Theodore S. Royer; and, in 1901, he increased the size of the property by buying an adjoining six acres from T. A. Wastler and Edward J. Eichelberger, trustees for an equity case in Frederick County. Each parcel cost $600. In a poignant memoir, Reed’s daughter Blossom recalls, We are living in a small bungalow planned by my parents–their bedroom, my bedroom, a tiny bath, lots of windows, a door that opens on a wonderful view of the Cumberland Valley …The east door opens and as we sit at our dining room table we look through a grape arbor into a terraced garden. This was the first (home) we have ever known, for my father is an army officer, a doctor in the Army Medical Corps. Since she also describes their bringing a maid who cooked for them, it is probable that the story-and-a-half outbuilding attached to the rear of the kitchen was also there, for this was the servant’s quarters.

Keewaydin faces west and is wrapped in a porch whose round columns sit on stone piers that rise out of the foundations. Shingled panels rather than balustrades fill the areas between the piers. Stairs to the main entrance on this porch are carried by stone abutments that end in an arch over the steps. The stone has a slight greenish cast from its copper content and is very hard. The second story extends out over the lower porch in places, and there are also porches on this upper level. The windows on the second story have twenty small panes in the upper sash and a single pane in the lower one, forming decorative patterns as the white trim paint contrasts with the natural shingle walls. The façade is very irregular with portions of the house extending forward while other parts recede. Gable, jerkinhead and hip roof forms all are seen. 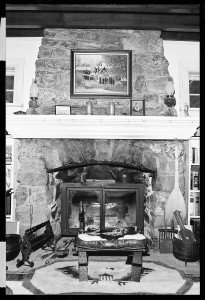 The front door enters the living room with its open beamed ceiling and original chandelier. A large stone fireplace with an arched firebox and brick hearth is on the right wall. To the left is a double run staircase with a paneled stringer and square newel post and balusters. In the closet beneath the stairs, the back of a riser can be seen. It is inscribed in pencil, Dr. Reed, Blue Ridge Summit. The woodwork around doors and windows is molded and mitered at the corners, while the baseboard is plain with a small trim mold at the upper edge.

Beyond the living room is the dining room, which can be entered from the porch and the back yard as well as from the kitchen. A narrow, steep stairway with a lattice balustrade winds upstairs in the corner. The small kitchen is furnished with old cabinets and has a small table in its center. The electric stove looks like a cast iron woodstove; and a shelf, filled with old food tins with their decorative advertising, runs close to the ceiling. The kitchen door exits into a closed shed, which connects it with the story-and-a-half outbuilding that once was servants’ quarters. Here the walls are paneled with narrow beaded boards.

Upstairs in the main house are four bedrooms, two baths and a small workroom. Two back bedrooms have sloped ceilings that follow the rakes of the roofs, and wooden corner moldings with turned ends protect the corners of these sloping walls. The master bedroom is at the front of the house and is filled with light. One opening is a jib window that allows access to an upper porch.

Miss Blossom Reed wrote that her parents were …real lovers of the out-of-doors…, and reported, …Many small boys in big farm hats and bare feet have helped build the stone fences…(which)..will have blackberry and raspberry vines, roses and honeysuckle, and white clematis. These stone fences still stand, terracing the back yard into separate garden sections. She continued, …Two summers pass and our home is completed…a dear little pump house has been built with lattice work and painted white. The pump house and grape arbor, mentioned earlier, are still there as well.

Dr. Reed had little time to work in his gardens, for he died of appendicitis November 23, 1902, shortly after having discovered the cause of Yellow Fever. His wife continued to keep the summerhouse until August 11, 1921, when a deed records that …Emily Lawrence Reed, widow, of the City of Washington in the District of Columbia…sold the property to H. H. Boyer for $3,000.

In 1961, Air Force Lieutenant Colonel K. D. O’Bryen was assigned to Site R, the underground Pentagon. He and his wife Mary purchased Keewaydin with its remaining acres. They raised their five daughters there, and Mary O’Bryen remains there still, keeping busy with various hobbies and looking forward to late spring when the gardens will once again burst into bloom. Miss Blossom Reed lived in nearby Blue Ridge Summit until her death in 1964.

Epilogue: In 1995 Dr. Darcy Hansen and her husband David Thomas purchased Keewaydin. They have been working on its restoration ever since.

This article appeared in the Herald-Mail Sunday, June 6, 1993 as the 46th in the series.