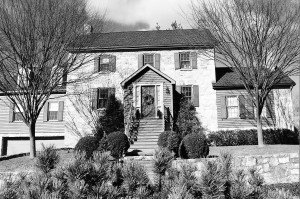 Taylor’s Landing Road angles north and west above Sharpsburg, winding around one of the great loops of the Potomac River. Most of the houses along this rural way are of modest dimension—some very old and others newer. The land is rolling and quite beautiful. Now and then vestiges of the C&O Canal can be seen on the left; and, on the right, well back from the road, a stone barn overlooks the scene from the side of a hill. Farther on, a narrow gravel lane travels over a cattle guard between two pastures that slope steeply down to the canal and the river beyond. Facing the river at the end of this secluded lane are a stone house and some outbuildings, including a frame barn with Victorian louvered windows and a square cupola topped by a weather vane.

The house sits on a level spot with the hills rising to the back and a newly constructed stone wall running along the lane before it. When Lee and Pat Stine first looked at this farm, Pat recognized the field in front of the house, which borders the canal and the river, as a possible site for prehistoric Indian encampments. A student of archaeology, she was enchanted by this and by the beauty and the privacy of the setting. Before looking at the house, she hoped that they would buy it. They had built two other homes, and she assumed that they would be able to do something with this one, whatever its condition.

In 1976, with just minor alterations, the Stines moved to the farm off Taylor’s Landing Road and got the feel of their new home. The house was too small, and they would add to it, but they wanted to understand the place before they changed it. After two years, a major addition on the west side of the house was undertaken. This would add a family room and kitchen on the first floor and master bedroom/bath on the second, with a garage at ground level. The plan, of course, was to complete the addition while living in the original house and then reverse the order. Because of the need to replace systems, in the end, the whole house was under construction for eighteen months, and living conditions were less than ideal. 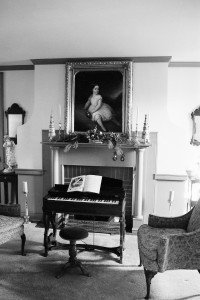 The house had been built in the early part of the 19th century. It has three bays with irregularly placed openings in the front façade. The front door is in the middle bay, and a small Victorian porch had been added to shelter it. To the right is a one-story stone wing; but, in a search for extra space, an earlier owner had demolished a section of this front wall and had enlarged the space. This wooden addition extended beyond the front plane of the main block of the house and formed an awkward joint with the roof of the porch. Both of these additions were removed, and a frame inset with two windows replaced the missing stone wall. Later, when excavating the front yard, the stone from the earlier demolition was found where it had fallen; and the Stines realized that they might have restored the wall to its original condition. But this was long after the room had been completed.

Inside, the house is divided into two rooms, side by side; and each of these rooms had a door to the yard opening at the back. The original stairs wound steeply to the second floor at the rear of the room to the left. These stairs were removed and replaced with wider, less precipitous steps at the front of this room. The tiny 20th century kitchen, which had been built at the back of this room, was also removed. The original mantel around the fireplace, with its shallow reeded pilasters and simple shelf, was repaired and the firebox restored with a plastered interior. The exterior door became the entrance into the new kitchen area of the addition.

The front door enters into the room on the right. In this room is a fireplace with a later mantel with shaped shoulders added on either side of it to accommodate the flue for the furnace. Beside this fireplace was a wide, low door that led three steps down into the stone and frame wing, the original kitchen in the house. This door was closed and made into shelves on both sides, and a new entrance into the wing was made from a window. This door leads into a game room that was added to the rear of the wing, then through the original back door of the kitchen wing. The sill of this door, one of several stone sills in the house, is worn and polished smooth by generations of feet passing over it. The cooking fireplace in this room had been made smaller and was finished out with rounded fieldstones. The Stines hope to restore it at a later time.

The second floor of the house was originally laid out with a single room across the front of the building and a small room on either side of the stairs at the back. A large bath was added at some later time in part of the front room. Two of these bedrooms were retained. The third became another bath, a large walk-in closet and the entrance to the new master bedroom suite. The original six-panel doors have been retained.

To the east of the house, the large cooking fireplace of the summer kitchen remained, enclosed by a more recent screened porch with a slab floor. The screens have been replaced with windows to create an all-weather building. Behind the house, on a slab that once held a chicken house, a new stone building is rising, a studio to house Pat’s flower arranging and crafts. Over the years, the Stines have developed the skills to lay stone and they are building the walls from old stone. The interior should be ready soon; the walls will take a little longer.

This simple stone farmhouse has been expanded to accommodate a different lifestyle in a different century. Old moldings and paneled jambs have been saved or replaced where missing, and the new additions have been built with exposed beams and handmade tiles. The tiles are glazed with earthy golds and tans to complement the dusty colors in the exposed stone of the old house walls.

After several failed attempts to trace the history of her farm, Pat Stine finally learned that, at one time, it had belonged to Joseph Avey, an ancestor of hers, who moved to this land in 1783. He probably built the house, for it did not pass from his estate until 1829. Perhaps it was Avey feet that helped to polish the stone sills in this old house.

Epilogue: The small stone building in the back has been completed and looks as if it has always been there. Lee has finished restoring the chimney and fireplace of the summer kitchen, adding an old brick hearth. This building is now used as a summerhouse. Lee has restored the cooking fireplace to its original size, using fieldstone and old brick, and the floor of the room has been re-laid with old flooring. A water garden surrounded by beds of flowers has been added, fed by a small stream of water that flows down the hill behind the house to a pond, then is recirculated.

This article appeared in the Herald-Mail Sunday, February 7, 1993 as the 43rd in the series.