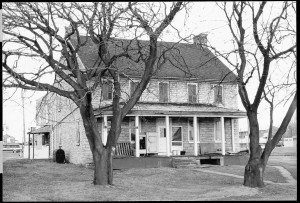 Conrad Hogmire’s 1793 stone home formerly stood at the corner of the Dual Highway and Edgewood Road. Both the stone home and stone barn were demolished in the middle of the night to make way for a shopping center.

At the most eastern edge of Hagerstown, just where the Dual Highway enters the city, two early stone buildings stand out among their 20th century neighbors. Shrouded with more recent sheds and porches, accretions of other reuses and neglected for decades, the original beauty of the old buildings still shines through. Presently operated as a flower, fruit and vegetable stand, the magnificent stone home was built in 1793 by Colonel Conrad Hogmire, a leader in early Revolutionary War activities. Conrad Hogmire had emigrated from Germany in 1741 at the age of sixteen and settled in the western part of Frederick County. He was a surveyor and received many land grants. When Washington County was created on October 1, 1776, Colonel Hogmire was appointed one of the first County Commissioners. Almost 70 when he had this ample home built, the colonel was to own it only three years. In 1796 it was conveyed by his eldest son Samuel to Henry Schroeder along with 117 acres of land. Colonel Hogmire died in October of the following year at the age of 72. 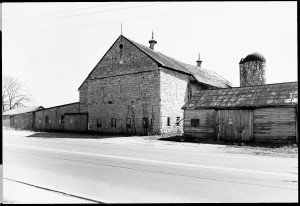 Beyond the house is a stone and frame barn forty feet deep and eighty feet wide. Its walls are still plumb and not cracked, testament to the skill of those early stone masons; and it stands proudly on the landscape in spite of the debris that surrounds it. A tablet on the west side reads: GS 1825. It is assumed that this refers to Gerrard Stonebraker, 1780 – 1855, who purchased the farm from Henry Schroeder on June 4, 1808, and whose descendants held title to the property until the death of Clara Stonebraker Howell in 1937.

Originally the road ran between the house and the barn, so the actual front of the house faces away from the Dual Highway. In the early 19th century roads were narrow dirt tracks and traffic was light. Having neighbors pass between the house and barn created a social situation for the residents, not a problem.

Old Fox-Deceived was the name given the plantation granted by Lord Baltimore to a James Walling in 1757. While the original reason for the name is not known, one charming story tells of a chicken farmer who was losing his flock to a wily fox in spite of all his efforts to protect his birds. At last he traded his chickens for cows and started a dairy. Proud that he had outwitted the cunning fox at last, he named his property Fox-Deceived.

Retreating from defeat at Gettysburg, the Confederate Army marched through the area in July of 1863. Heavy rains had fallen for several days, and the rivers were high. Robert E. Lee was at Williamsport, but he, his forces and his supply trains were unable to ford the Potomac until the waters receded. While Lee’s infantry dug in, J. E. B. Stuart’s cavalry brigade and horse artillery covered the withdrawal. On July tenth, a crescent-shaped battle line was formed around Funkstown with the left side of the Confederate line beginning at Stonebraker’s barn, where sharpshooters were posted. They met the Union forces under Brigadier General John Buford, and the battle raged most of the day. There were some 479 casualties on both sides. Jacob R. Stonebraker wrote a description of the battle in his memoir, A Rebel of ‘61. 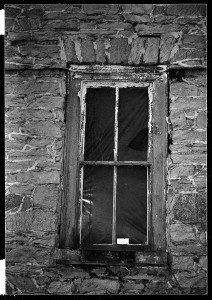 Ronald Andrews, National Register Administrator of the Maryland Historical Trust, says that Fox-Deceived is eligible for the National Register of Historic Places. The application for National Register status says in part, “This late 18th century stone dwelling and bank barn represent a tangible link to the early history of Washington County. Built by a wealthy and prominent landowner of the time, the farmhouse reflects both the architectural trends and the prevailing economic order of late 18th century rural western Maryland. The overall design and finishing features convey the sense of vernacular architectural transition from Georgian to Federal period while the choice of building material and scale suggest the relative social stratification and cultural background of its builder/owner. Although some deterioration has occurred over the years, both farmhouse and barn retain the original architectural integrity.”

The present status of Fox-Deceived is guarded. Situated at a busy corner of an expanding commercial area, it was acquired by the DeChiaro-Rachuba Group of Towson, Maryland, who say they were unaware of the historical significance of the buildings at the time of purchase. Since the property does not lie in any of the three historic districts of the City of Hagerstown and since a site survey of landmarks outside these districts has not yet been done, the Preservation Design District Commission (PDDC) has begun the process of designating these buildings and one and forty-four hundreths acres around them as a local landmark. Until such designation is completed, the PDDC has no legal way to protect the buildings. Fearful that intervention by a governmental body would limit their options, the developers applied for a demolition permit. Since the process for creating local landmark status takes at least three months and a demolition permit is routinely issued in ten days, a permit was granted. The developers, however, agreed to give the PDDC fifteen days’ notice if they decide that demolition was necessary and agreed to consult with the Commission in seeking alternative solutions. Restaurants have been built in mineshafts and World War I bunkers; a very successful one operates in a collection of barns in Massachusetts. Office space in historic homes has become almost commonplace, but tenants still seem willing to pay a bit extra for the history. Surely there is a way for these buildings to be used again.

Epitaph: Fox Deceived was destroyed just after midnight on February 22, 1991, even though Davis Renn, engineers for the owners, had prepared two excellent plans for reusing the structures.

This article appeared in the Herald-Mail Sunday, August 6, 1989 as the 4th in the series.