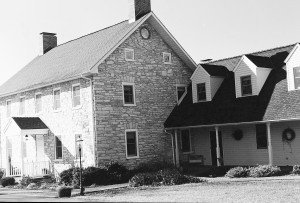 Settled far back from the south side of Route 40 just west of Beaver Creek is a stone house, freshly pointed, with candles glowing in the windows. This home is the beneficiary of an almost miraculous salvage operation that still continues. On April 29, 1982, a disastrous fire gutted this house and killed its solitary occupant, owner Marie Lakin. Floors were burned through, joists destroyed and the roof collapsed. One ancient tree standing near the house was so badly scorched that it died, and another still shows scars of the searing heat. Roofless and forlorn, the shell stood for several years, a constant reminder of the raging fire that burned so completely its origins were never determined.

Christian Newcomer was born in Lancaster County, Pennsylvania, on February 1, 1749, one of eight children of Mennonite parents who had emigrated from Switzerland. As a young man, he had a powerful religious experience but was reluctant to preach his faith, for he did not feel worthy. In 1775, he moved to this farm at Beaver Creek. In his journal he wrote, …like Jonah, I sought safety in flight by selling my plantation and removing from my neighborhood to the State of Maryland. Soon after he arrived, he became desperately ill. Concluding that this was God’s way of compelling him to preach the gospel, he gave in and immediately began to recover his health.

Newcomer’s faith had been strongly influenced by William Otterbein and George Adam Geeting, who were key to the formation of the United Brethren Church. He became a circuit-riding preacher for this new denomination and rode thousands of miles to preach the Gospel, going as far as Indiana and Canada. He crossed the Allegheny Mountains 38 times and preached up and down the Cumberland and Shenandoah Valleys, gaining many conversions. He made his last trip, on horseback, when he was over 80.

Newcomer was appointed a Bishop in the United Brethren Church in 1813 and remained in that capacity for the rest of his life. He made record books for the groups he created, collected missionary funds and organized classes, becoming known as the St. Paul of the United Brethren faith. For the last 35 years of his life, he kept a journal in German that gives a picture of life on the frontier and his experiences as a missionary. In 1830, he died at 81 and was buried at the old Dunker Church Cemetery near Beaver Creek.

The house at Beaver Creek was built about 1795 by Christian Newcomer, and it stands astride a spring that has always been its only water source. Typical of its time period, it has five bays with a central entrance and is two-and-a-half-stories high. The north and east walls are coursed local fieldstone, while the other two walls display rougher stonework. Above the doors and windows are flat arches made of cut stone with a central keystone. A circular stone edged with header bricks is set high in each gable end. These were probably once struck with initials and a date, but time has worn them away. To the rear of the house is a two-story wing that contained the kitchen and still retains the cooking fireplace. The house is set in a gentle hill, and the cellar is accessible at ground level from the rear of the building. 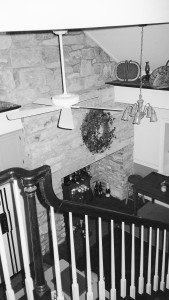 In the spring of 1982, David Merchant, a young man in the excavation business, noted the sale sign in front of this burned out shell. A love for old stone houses made him buy it along with 22 acres in 1984. Many times he was advised to level the seared walls and start over, but he persisted in his efforts to save the structure. Ten truckloads of trash were taken out of the basement and a mason was hired. The front wall leaned in severely and had to be removed from above the front door. The stone was carefully saved, and the wall was rebuilt in concrete block and faced with this original stone. The interior chimneys at either end were also rebuilt in block and relined. The cooking fireplace had lost its log lintel to the fire, and this was replaced with steel and stone. It took two three-foot dampers to close the throat of this chimney.

Interior finish work has not yet begun. The windows, modern ones, were installed last fall; and the walls are studded out. Plywood sub-floors are down, and a rudimentary stair leads to the second story. David Merchant intends to restore the first floor to its original state with random-width pine floors and early woodwork with paneled window jambs. The second floor will be redesigned to accommodate bathrooms and closets, and two more bedrooms will be placed in what was originally the attic. David and his crew work on the house as time and funds allow—a rainy-day project, he calls it; for it keeps them busy when weather would otherwise make them idle. Eventually, Christian Newcomer’s house will become David’s home. It will be finished no later than 1995—in time for its 200th anniversary.

Epilogue: James Kittle of the State Fire Marshall’s office called after this article appeared to say that he had investigated this fire. The fire moved from the kitchen through the rest of the house, indicating that it started in the large cooking fireplace. Mrs. Lakin lived in Florida, returned to Maryland in the summers and was in the habit of making a fire in that fireplace on cool evenings. The man who had helped out at that house for a number of years reported that the chimney had not been cleaned for fifteen years. It is assumed that the fire started in the chimney.

The house was finished in time for its 200th birthday, but work on any home never really stops. Floors throughout are random-width boards, woodwork has been copied from old moldings, and mantels replaced. A lovely addition has been tucked beyond the original kitchen with a large screened porch just beyond. This porch overlooks a cozy in-ground pool. The house is a home once again.