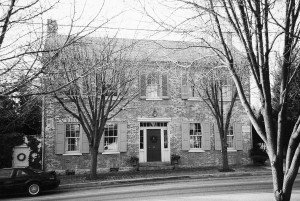 Jacob Funck [sic] and his brother Henry came to West-ern Maryland from Virginia in 1749 to buy land. In 1754 the brothers purchased a tract of land on the east side of the Antietam that was patented as Black Oak Ridge; and it was here, in 1767, that Jacob laid out a town which he named Jerusalem. A main street was built, lots were sold and fifteen log cabins were built. In 1769, Jacob Funck built a large stone house on the main street near the creek. Jacob soon left to develop a town called Hamburg, now Washington, D.C., and Georgetown, it was then that Henry moved to the stone house in Jerusalem. 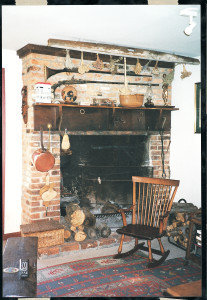 On July 6, 1776, even before they had received news of the signing of the July 4 Declaration of Independence in Philadelphia, Pennsylvania, the Maryland convention in session at Annapolis passed resolutions declaring the allegiance of Maryland to the mother country to be at an end and calling the first State Convention for August 14, 1776. At this convention, it was decided to divide Frederick County into three sections; and on September 6, 1776, Montgomery and Washington Counties were created. In order for the new Washington County to begin to function, a County seat had to be decided upon. The question was put to the duly qualified voters of the County, and Elizabethtown was designated as the polling place. Jerusalem was the only challenger to Elizabethtown for County Seat. Mr. Funck circulated petitions among his fellow citizens asking that this honor be bestowed on Jerusalem, far more beautiful and judiciously located than its rival, but the personal influence of General Daniel Heister and other leading citizens of Elizabethtown carried the day with the members of the convention. This vote decided the destinies of the two towns, then nearly equal in size. Elizabethtown became the city of Hagerstown, and Jerusalem remained a village. 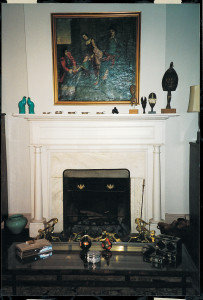 About 1854, people began to call Jerusalem Funkstown, and the house next to Jacob Funck’s home became 29 Baltimore Street. In 1857, Joseph Francis Davis and his wife Angela Kirkham Davis purchased this property. Joseph Davis had been born in Boonsboro in 1826 and went to Batavia, New York, around 1850. There he became a partner in a successful boot and shoe manufacturing company with Charles H. Kirkham. He also met Charles Kirkham’s sister Angela; and in due time they were married. Immediately after their union, the Davises moved to Funkstown, now a bustling commercial village on the National Pike. About a block from their home, Joseph Davis ran a large country store of general merchandise consisting of dry goods, drugs, groceries and Queensware, a cream-colored, glazed earthenware.

The Davises were in Funkstown during the Civil War, and, years later, Angela Kirkham Davis wrote a thoughtful reminiscence of this period for her nieces. She records trips to visit the various encampments around the area and the intense excitement of the citizens as they watched the troops march. Although it was a splendid sight, yet it seemed terrible, when I realized that this was no child’s play. They repeatedly took provisions to the soldiers at the camps. At one point, while declaring her allegiance to the Union, Mrs. Davis served water to the ragged Confederates as they marched through town. When asked why she would give them water, she responded, Because our Heavenly father taught us to give a cup of cold water, even to our enemies. 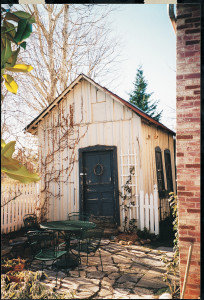 A large map of the country, on which they followed the movements of the armies, was kept in the hall. When the rebels approached, the Davises hid account books, important papers and money …in the woodshed by digging a hole and burying the iron wash kettle filled with these packages and covering it with boards, dirt and chips, no one knowing but ourselves, where they were. And Mrs. Davis handed over her silver tea set, hidden in a basket, to Aunt Charlotte, one of her friends who was a huckster. Aunt Charlotte took up her kitchen floor and buried the tea set there. Mrs. Davis did not see the set again for several months until Aunt Charlotte felt it safe to return it. 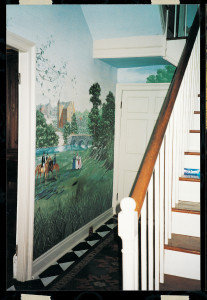 In 1988, Sterling Everett and Jack Schellenberg purchased the house at 29 Baltimore Street and began a massive renovation project. Sterling is a professional artist, and his talents are apparent everywhere. The exterior of this red brick house had been painted a cream color. Disappointed that his house no longer looked like a brick house, Sterling Everett undertook to paint each brick and all the mortar joints around the entire house to look as if they had not been painted—faux brick. In the entry hall that once held the map on which the Davises had followed the actions of the Civil War, he painted a mural taken from an early photograph of Baltimore Street. It shows the stone bridge over the Antietam, the mill which once stood by it, Jacob Funck’s house and the house at 29. This mural winds up the stairs and into the upper hall. The floor in this hall is painted to resemble black and white marble tiles.

The footprint of the house is shaped like a T with the back wing of the house having been built first around 1785. The end room of this wing still has the cooking fireplace and narrow back stairs, which lead up to the back bedroom. This is now used as a den, and the room in front of it has been converted into a kitchen with aqua walls and white cabinets. The front hall and the room to the east were built next and stand over the basement. Finally, the room on the west side of the center hall, with its second story, was added. With windows on opposing walls, these rooms are light and airy. They have original woodwork and period mantels taken from a home in Clear Spring. Upstairs, four bedrooms repeat the floor plan of the first floor, with the ceilings of the back two rooms sloped to accommodate the lower roof. Some of the original six-over-three window sashes still remain. 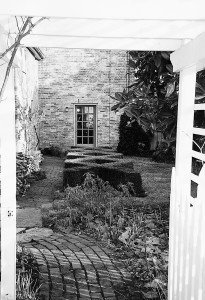 Behind the left side of the house is a charming formal garden with boxwoods planted in a diamond pattern. This pattern is repeated in ivy espaliered to the wall and in the wisteria that is trellised before the porch that spans the back of the house. Beyond, Angela Kirkham Davis’s wash house still stands toward the back of the yard. Her memoir reads: One summer, when I was North, Mr. Davis had a pretty little Gothic wash house built, as a surprise to me. The first part consisted of a good sized room with tubs, benches, a cistern, a pump, a sink and a fireplace with an iron crane, which swung back and forth, where a large kettle was hung for the purpose of boiling the clothes. Above this room was a smokehouse and adjoining, was the woodshed.

Beautifully restored, this charming property is now the home of George and Elizabeth Wheelock. The Wheelocks sometimes refer to their home as the Faux House since so many surfaces are painted to resemble other things. But the history of the house is compelling, and the words that Mrs. Davis wrote as she recalled names and events for her nieces still ring true, We made history so fast at that time, we seemed forgetful of details.

Epilogue: The Wheelocks have finished the massive renovations begun by Sterling and Jack, creating a house and garden that fits their style while maintaining all the dignity of the original. The landscape features multiple pyracantha bushes across the west front wall espaliered in a series of circles within diamonds. A large kitchen garden is planted to produce fresh food and herbs nearly all year.

This article appeared in the Herald-Mail Sunday, May 5, 1991 as the 23rd in the series.