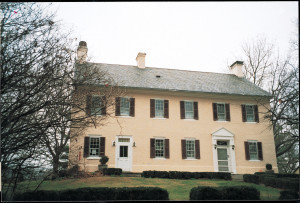 Jefferson Boulevard stretches east from Hagerstown through a mix of modest homes and small commercial enterprises. Just past the bridge over Antietam Creek, Indian Lane winds off to the right, a narrow asphalt road through a subdivision of newer brick homes. Continuing along this way, Indian Lane twists to the left and soon becomes a single-lane gravel road passing between fields toward a large, cream-colored barn and house. A smaller gray house sits just beyond. This complex of buildings is Antietam Hall.

It appears that, in 1744, Ignatius Perre acquired a 500 acre land patent called Brother’s Request, and that he sold 100 acres to George Circule in 1765. This was named George’s Lot by Circule. Circule sold 100 acres to Martin Rohrer in 1769, and Rohrer held the land until his death in 1806. It was probably during Rohrer’s stewardship that the two houses were built. (The present barn was built in the 1930s following a fire which destroyed the existing barn.) Since brick was an expensive building material in the 18th century, Rohrer must have been a wealthy man.

The main house is laid in Flemish bond on the north side facing the barn and on the east front façade, which has a quarter-round molded brick water table. The other two sides are laid in common bond. The house faces northeast, looking toward the gravel lane from behind a boxwood garden. It has six bays with jack arches over the windows and doors. Two doors open on this façade. The more southerly is a plain, two-light door with a simple four-light transom above it. The main entrance has a double door flanked by fluted pilasters and topped by a rectangular transom that is divided into triangular panes by muntins radiating from a central floret. Some of these panes are blue and orange glass–probably part of an earlier renovation. The doors have heavy frames with hand-pegged joinery, large iron box locks and full-width strap hinges. The windows in the front façade are nine-over-six as are most of the other windows in the house. These also have heavy frames and pegged joinery. 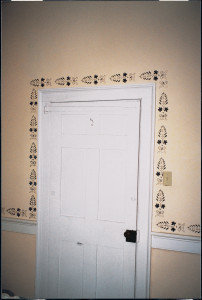 Stuart and Ida Jeanne Abraham have lived at Antietam Hall for 36 years. They have raised their seven children in this home; and, early in the process of renovating the house to accommodate their family, they became fascinated with trying to understand the evolution of the old house.

Their first reclamation project took place immediately after purchasing the property in 1955 and before moving in. Tantalized by the massive masonry column at the end of the kitchen, they went to the house just after signing the papers and began removing masonry fill to reveal a cooking fireplace with an opening eight feet wide and over five feet tall. The wooden lintel above this opening is ten feet long and sixteen inches wide. In the back of the fireplace is the trace of the arched opening that once led to a beehive oven that stood beyond the outer wall of the house. This huge space holds a collection of iron pothooks found when excavating the porch, a crane from Stuart’s mother’s family and family mementos. On the wall above is hung a creamware plate with a feathery cobalt edge that was found on the summer beam tucked between the joists of the kitchen floor near the basement entrance. 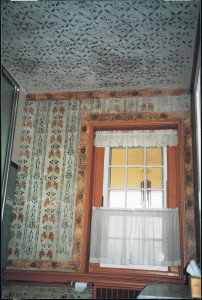 While adding a hall on the second floor, the Abrahams could see bits of red, white and black color under the green, blistered, outer layer of paint that surrounded a hole made in an interior brick wall. A visiting history professor suggested that there might be stenciled patterns under the paint, and indeed there were. The Abrahams have spent weeks chipping and scraping the many layers of paint and whitewash to reveal two vertical red and black patterns of pineapples and leaves and flowers which alternated above the chair rail. An undulating horizontal vine pattern in red and black appeared below the rail and a diagonal black geometric on the ceiling–all stenciled on a white ground.

The stencils are located only on the second floor in the area that once was a large single room, flanked by smaller rooms at either end. This space was called the ballroom in the 18th century and was used for entertaining and family occasions in affluent rural homes of that period. The Abrahams have copied segments of the stencil patterns and used them to decorate other rooms while leaving the originals revealed in several places. The stenciling was probably done by an itinerant artist and is quite rare in this area.

From the basement, the unusual framing of the floor can be seen. The beams are left round on the bottoms, and four-inch insets are cut from either side, leaving them with a cross-sectional profile something like an upside-down mushroom. These beams were laid between the foundation and the summer beam at roughly two-foot intervals. Short pine planks were placed between the beams, supported on these cuts, to form the sub-floor; then the interval above was filled with plaster to the top of the beams. The oak floor was then laid on the beams in the usual manner. This puncheon insulation would have both conserved heat and given some fire protection. 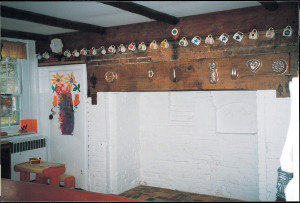 There are mysteries in the house. Why is there a three brick thick wall between the kitchen and the rest of the house? Was the kitchen added on or was it added to? Or was that wall simply placed there as a fire wall? The exterior façade shows no evidence of joints or piecing, and there is nothing visible in the attic either. A broad arch spans the living room, bisecting it into two small areas. Were they once separate rooms with wide doors? Why are there notches in the supporting woodwork just under the arch? 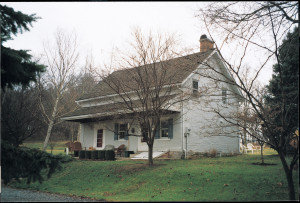 The smaller gray house may have been the original home on the property, or perhaps it was built as a tenant house. The front façade is laid in Flemish bond with a quarter-round brick water table. The other elevations are laid in common bond. When the Abrahams purchased the property, it had been used as a chicken house and was severely neglected. With help from Douglass Reed, the Abrahams and their son Austin, who now lives in the house, have rebuilt it into a charming three-bedroom cottage with exposed beams and a cooking fireplace. Austin has made moldings to match those of the main house, and he has carefully finished every detail. Beneath the house is a stone root cellar with a barrel-arch roof and two windows, one in the back wall opposite the entrance and the other created in the side wall by joining another arch into that of the roof. The cellar is protected from animals by square posts set vertically and close together in these windows.

The Abrahams continue to enjoy their farm, and the house evolves to serve their family of three. The children’s playroom behind the kitchen has become Stu’s office and houses part of his vast collection of miniature trucks as well as the records of The American Truck Historical Society, of which he is Chairman. If he has any spare time, there is a collection of vintage International trucks in the barn and a parts department for the use of those restoring these old carriers. Still, the questions remain–if only the walls could talk…

Epilogue: Stu and Ida Jeanne have moved to Ravenwood Lutheran Village. They still own the farm and are thrilled that their granddaughter Amy, her husband James Taylor and their twin sons now live at Antietam Hall. The house has a new family and the Abrahams are content that it is well cared for.

This article appeared in the Herald-Mail Sunday, March 3, 1991 as the 21st in the series.