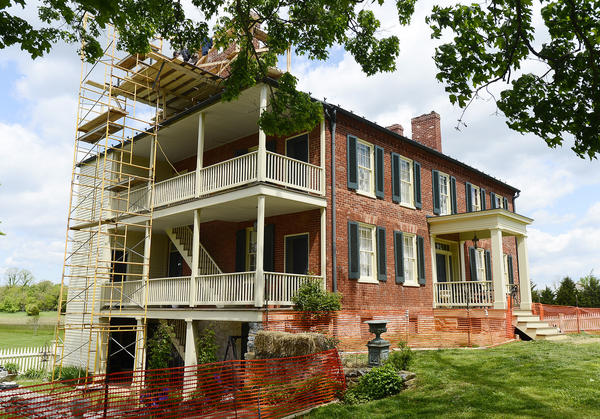 Undoing 150 years to reveal past in Burnside’s Headquarters

Mills Road runs generally north/south between Burnside Bridge and Harpers Ferry roads, near land crossed during the Battle of Antietam. Well down the road, on the west, stands an elegant brick house opposite a weathered frame barn with brick granaries.

Double chimneys rise from either gable wall of the house. A one-story, hip-roofed porch shelters the main entrance in the center of five bays. Simple sidelights (which at one time could be opened) and a transom, each with rectangular panes of glass, surround this door. The house stands on stone foundations in a yard surrounded by a painted wooden fence.

Antietam Ironworks stood at the mouth of Antietam Creek at its juncture with the Potomac River. It manufactured iron from South Mountain ore with charcoal made from the mountain’s forest, and it controlled some 17,000 acres of land.

By 1842, the Ironworks had financial problems, and its lands were being sold. David Showman, a wealthy local farmer, and his four sons purchased a 255-acre parcel of this land “lying along the public road running from Sharpsburg to Harper’s Ferry about three miles south of Sharpsburg and 1 1/2 miles from the C&O Canal” for $7,534.80, a price suggesting improvements on the property. This parcel was adjacent to the Showman farmstead.

Architectural historian Paula Reed dates the house from the 1840s, placing its construction after the Showman purchase. Which of the Showmans built the house and whether there was an earlier house or other structures present on the location is not known.

The house remained in the Showman family until 1905, when it was sold to James Snyder. Fifteen years later, Noah Mills purchased four parcels of this property containing something more than 260 acres for $13,000 dollars, a large sum at that time. The home would remain in his family until 1988.

The house has a full-height basement, and the footprint of the house, about 1,500 square feet, was excavated from the underlying rock. Brick is laid in common bond on all walls, with stretcher bricks only on the front façade. Double parlors flank the center hall on the right (north) with two rooms on the left as well. Grained double doors, each with 12 panels, separated these rooms. An interior brick wall covered in plaster separates the hall from the parlors, rising from the basement to the attic. It isn’t known if this indicates two-part construction of the house or if was built to strengthen the structure and to protect against fire.

Fireplaces serve each of the four rooms on the first and second floors, and the basement has two large fireplaces as well. In the more formal parlors on the first floor, molded woodwork is finished with pyramidal corner blocks. The corner blocks and woodwork are flat in the kitchen and dining room. The stairway in the center hall has an easy rise; its handrail is rounded with delicate, tapered round balusters.
Mabel E. Mills, Noah’s wife, purchased a number of properties in Washington County and, toward the end of her life, transferred partial ownership of these lands to her son, George, and his wife. The family farm became Gum Tree Farm Partnership. Mabel died in 1979, precipitating a redistribution of the lands that she owned and the inclusion of Earl and Kimberley Mills, presumably her son George’s son and his wife, in the partnership. On July 11, 1988, the family farm was sold to Richard A. Willis, who intended to develop the property.

That same year, Dennis Frye, a professional historian, an expert on the Civil War and a passionate speaker on the Battle of Antietam, was searching for a home and knew that this one had been Gen. Ambrose Burnside’s headquarters from Sept. 24 until Oct. 7, 1862, following the battle. He carefully checked the house. The brick walls appeared to be plumb, but the lintel of one of the windows in the northwest bedroom was askew. When he asked the family, they told him the house had been struck by lightning in the 1940s, with the force of the strike being absorbed by the adjacent chimney and tilting the window frame.

The Mills family had lived in the house for almost 150 years and had altered it liberally. A full porch across the front of the house replaced the small original porch, and the double porches on its south wall were removed. Floors had been covered with asphalt tile. Walls were hidden behind paneling. HVAC was added, with holes cut into the floors to accommodate its vents. Several layers of wallpaper covered ceilings and walls that hadn’t been paneled. Despite these alterations, the house resonated with Frye, and he and his wife purchased it with an 11.09-acre parcel of the farm surrounding it on Dec. 12, 1988.

Work began. Frye found that the walls had two-by-fours and one-by-one lath nailed to the plaster to hold the paneling, but the original plaster remained. He spent long hours removing first the paneling and then the studs and lath, being careful not to damage the plaster any more than he had to. He took up the asphalt tile only to discover that the original pine floors had been first covered with Masonite that had been nailed into those floors every inch and a half. Frye carefully removed the Masonite and then painstakingly pulled the nails out so that he did little damage to the floors. Flooring from the attic was scavenged to fill in holes. This work was so agonizingly slow that one room still remains to be done.

Frye marvels that all the changes made by the Mills family were reversible. The family had carefully saved parts from the elements that they removed, so that historically accurate replicas could be made. A porch post, part of the rail, and the pilasters for the original front porch were found beneath its replacement, as were remnants of the original foundation. The original front door, complete with its faux graining and massive iron lock, was found in a pig shed behind the house.

The great 12-panel doors between the sitting rooms were the most engaging features of the house, and Frye worked carefully to strip the coat of black lacquer from them to reveal the original birds-eye tiger maple faux graining. He also recovered the graining on the doors in the downstairs hall. As he worked on the living room floor, he discovered bloodstains, probably left from someone wounded at the battle. All the floors are left unfinished or with the edge of original paint that had been used to cover the area not hidden by carpets.

The original swinging doors that separated the kitchen from the dining room were found in the garage. They had been painted rather than grained. The fireplace in the back parlor had been closed, and no mantel existed. One found in the pigpen fit perfectly into the indentations in the plaster. All ten fireplaces are now open and functional. Three of them accommodate clean-burning pellet stoves, which heat the entire house, allowing the basement level to be used as living space rather than for a furnace.

The Fryes salvaged 70 percent of the window glass in the windows. Replacement panes were cut from old glass scavenged from old sashes that had been discarded. Frames were repaired with epoxy whenever possible and old paint scraped off and replaced. The paneled doors had been painted in four colors, subtly different shades, and these colors have been replicated throughout the house.

The end of the hall on the second floor has been turned into a bath as is often done in old houses, but this bath is decorated so that the door can be left open while still giving the illusion of a Victorian room. The vanity looks like a large 19th century dresser; a protruding wall hides the commode, and the tub/shower is recessed behind woodwork.

Attic stairs rise gently to the top floor. A tall, hinged window between the double chimneys can be opened to give access to those chimneys in case of fire. A wall made of great two-inch thick slabs of poplar, rough-sawn, still edged in bark, separates part of the attic from the main room.

The work has gone slowly, carefully, each endeavor a restoration project and also a comfortable lifestyle change for them. In 2003, Dennis and Sylvia put a ceiling in the large basement room and opened the service fireplace there. Well-lit, it is a family room as well as office space. Sylvia’s office in another corner of the basement is being renovated now, with damaged plaster removed and decorative painting on the remainder revealed.

Everywhere, great attention to detail shows. Look carefully at the new posts holding the side porches and you can see the slight undulations caused by hand-planing. When the worn basement steps became dangerous, they asked the carpenter to replicate the cupped, worn edges of the original steps into the repair.

For Dennis and Sylvia, each element of the house resonates with the history of the place and the suffering of those who fought at the Battle of Antietam, and they are careful to preserve all they can.

This article appeared in the Herald Mail Newspaper, Hagerstown, Maryland July 18, 2013, as the 198th in a series of articles by Patricia Schooley about the historical and architectural treasures of Washington County.