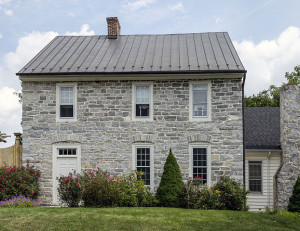 Fiddlersburg is a small community on the eastern fringes of Hagerstown. The main street, Antietam Drive, has been supplanted by Eastern Boulevard and the railroad crossing closed so that it comes to an abrupt dead end. The neighborhood is quiet. Small houses are tucked along both sides of the street with wide gaps for small fields and large gardens. Antietam Paper Mill once operated just on the other side of the tracks; and, for over a hundred years, the cement company has hada kiln manufacturing cement nearby. Many of these workers lived here in the small, early houses. As industries developed, Fiddlersburg grew up around Rockland Farm, the oldest house in the village. Many years ago, residents of this community would sit on their porches and play fiddles. So frequent was this serenade that the area became known as Fiddlersburg, or so the story goes.

Locust Bottom was surveyed in 1758 for H. Funck. It contained 1081 acres of land. In 1773, Henry Funk, Jr. built the solid stone house that sits on the east side of Antietam Drive just south of Old Forge Road on a parcel that contained parts of Locust Bottom, the Resurvey on Simmon’s Rackt, and Strife FoundThe house has three bays, with its main entrance in the north bay. This entrance has a four-panel door and a rectangular transom with four lights. Most of the windows have segmental arches, as does the 1773 date stone in the south gable wall. Most sashes are nine-over-six except for the two nine-over-nine windows on the west façade next to the front entrance. These windows are unusually long for the 18th century and may have been lengthened during a later renovation. Window frames are wide, pegged at the corners, and made of black walnut, a wood that resists moisture damage.

The first floor is divided into three rooms and a hall. The front half of the house holds the hall on the north and the large living room on the south. A summer beam runs from gable to chimney column, then chimney column to the other gable between these two halves. The back of the house has the kitchen on the north with the dining room beside it. This room has a large built-in cupboard on the inner wall, an elegant piece with a dramatic cornice, reeded pilasters, and two large four-panel doors above four drawers. 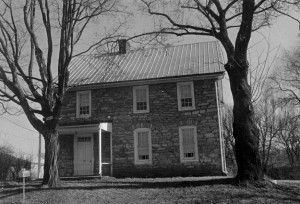 A single-story modern frame addition adds a room on the south side of the house, and another addition was once a porch off the kitchen at the back of the house. The entrance to the partial cellar is at the rear of the house as well. Close-set logs, flattened top and bottom and sloped on the sides, support the floor above. The spaces between these logs were filled with stones and other material to insulate the house above, a technique called puncheon insulation. The north third of the house stands over a crawl space, and here widely spaced round logs were used as joists.

Upstairs, three bedrooms and a large bath fill the space. The unfinished attic reveals 18th century framing. Top plates, at least twelve inches in cross section and extending the full length of the house, rest above the floor, with roof rafters mortised into them. Shims on each rafter raise the roofline enough for it to extend beyond the outer edge of the wall to create eaves. Purlins, supported by braced gunstock posts, stretch from gable to gable halfway between the plates and the ridge. The rafters are supported by the plates, the purlins, and by their opposite member at the ridge.

Behind the house is a small log building with two rooms. The room on the north has a small, nearly square window with a single, hinged shutter. The other space holds the remains of a fireplace. The interior walls are not finished.

Beyond the main house stands a small stone and frame house built over a spring that empties into Marsh Run. The two bay stone section on the east had a twobay frame section added to its west gable, using the same roofline. This house faces south and has double porches. The cellar level has three doors on the south, two leading to the east room, the stone section. A massive fireplace with a wooden lintel more than 14” wide dominates the east wall. The spring rises in this room, directed through tall cement channels to an exit in the east wall. Upstairs, two doors again enter the stone section from the porch, but these doors are not aligned with the doors below. This room also has a fireplace, and winder stairs beside it lead to two rooms on the attic level. The upstairs room of the frame section protects the gable end of the stone wing and reveals its date stone that reads “MF 1803 PF,” indicating that Martin Funk, Henry Funk, Jr.’s son, built the house.

Mary Funk, Martin’s widow, sold 161.5 acres and 14 perches of land to Daniel Emmert in 1827 for $4,847.62 ½. The property changed hands twice. Then John Dayhoff purchased it, now 138 acres 30 perches, and had it resurveyed as Rockland Farm. The size of the parcel had diminished to 56 acres by 1892. Clarence and Vergie Hurd, who acquired Rockland Farm in 1938, sold the buildings with only 0.99 acres to Emma Wolfinger eleven years later. In 1965, Emma Wolfinger sold the main house with 0.61 acres of land to Dorothy and Charles T. Davis, Sr., separating it from the small house in the back.

Geraldine DeStefano purchased the stone house in 1979. She added the wing on the south and did a great deal to preserve the house. She then placed it in trust for her two children, who later offered it for sale.

Chris Horst and Tara Amann happened down Antietam Drive in 1999 and saw the house for sale. They were looking for a home, one with history, and loved all the detail that remained at Rockland Farm. They purchased the house in January 2000 and were able to acquire the little stone house at the back for $1. It had been renovated as a tenant house. Then the floodwaters of early 1996 rose to the main floor, completely inundating all the systems of the house, making it uninhabitable.

Many things had happened to the main house over its long life. At one point, the second floor had been turned into an apartment; and a door with exterior steps leading to the ground was opened into the north gable wall. At some later time, these steps were removed; and the door was changed into a window, leaving the door’s shadow in the stonework.

The house has only two fireplaces, brick, one in the living room and a small, closed one that Chris found behind plaster in the kitchen. The house is built around a center chimney with three rooms, a rather typical German floor plan, except that there should be more fireplaces. The floor in the attic may tell the tale. It has been filled in around the two-flue, brick chimney column, suggesting that perhaps this masonry column was once much larger, probably built of stone, and that it contained more flues serving more fireplaces. Henry Funk’s probate inventory dated October 28, 1799 includes “stove in back room,” and “1 stove in large room.” These stoves must have supplanted the fireplaces, since they seem to be in the same rooms, but they do not explain the attic floor repairs or the few number of flues.

The original staircase to the second floor was also removed at some point. Perhaps it had circled around the chimney column and was lost when the stone chimney was removed and replaced with brick. A rather rough, steep stairway built along the north wall of the hall was there when the house was entered in the National Register of Historic Places in 1978. Then it, too, was replaced with a modern staircase.

The floor in the kitchen, when finally found under layers of later flooring, has oak floorboards continuing from the hall joined to pine boards, laid north-south, that floor the rest of the room. Was there a wall along this juncture?

Chris and Tara also discovered that the house originally had not had lath and plaster ceilings. The beams and the bottoms of the floorboards were beaded and then whitewashed, leaving the beams exposed.

Chris and Tara worked on the house for eleven months before moving in. Chris repaired the window frames and sashes, discovering that they were made of walnut lumber with the ovolo molding carved from the framing member, thus omitting the joint between frame and trim molding that could allow water to penetrate and deteriorate the structure. Chris milled replacement pieces and glued them into place with epoxy rather than using nails. He rewired the house, added a new furnace, replaced plumbing and fixtures, tiled the bathroom, and added a spa to the rear addition, which he then tiled.

The kitchen floor presented real problems. It was very loose, suggesting that the support structure beneath it had failed. The floorboards were removed and new joists set. Then the boards were returned, having been sanded and finished.

There is still much to do, but the house is very livable and beautifully decorated with simple period pieces and sympathetic modern furnishings. Chris presently uses the small house as a workshop, but he plans to restore it and the log summer kitchen, too. A lifetime of projects awaits Tara and Chris.

This is the 141st in a series of articles about the historic and architectural treasures of Washington County.