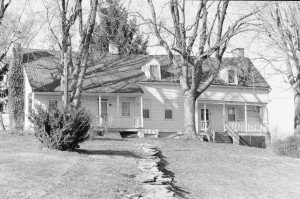 Bloody Lane, where once the Union and Confederate Armies met in the deadliest, single day battle in the history of this country, is quiet now, a sunken road winding among fields edged with split rail fences. To its left are a mailbox and a sign announcing a private farm in the heart of Antietam Battlefield. The narrow farm lane winds more than half a mile among the quiet landscape, a stone fence following it intermittently on the right. A large frame bank barn, weathered dark, looms to the right as the lane curls behind it, past a pond, toward a group of farm buildings.

Settled at the foot of a hill is a small stone building with a large brick chimney at its gable end. A tiny stream flows through this building from a spring that emerges under an arched brick shelter just to its west. This building has two rooms and a loft. A seam in the stonework between the two rooms indicates that the first structure here was the southern room, a single-story, sixteen foot by eighteen foot, stone cabin with a service fireplace. At some point, this building was nearly doubled in size when the sixteen foot by sixteen foot northern room was added. The roof was raised to create loft space. Joists supporting the loft floor were extended through the wall on the north, making the roof overhang to the west, protecting the doors to the two rooms. The spring flows through the newer north room in a concrete channel where crocks and jars of foodstuffs were once placed to cool. A hole in the ceiling of this room is connected to a window in the loft’s gable end by a plank shaft that directs light into the lower room. The two rooms’ floors are on different levels, and there is no connecting door between them. 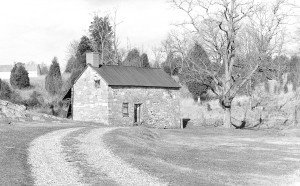 The lane winds past this building to a parking area at the foot of the hill. Another stone structure, once an icehouse, is built into the base of the hill. Its northern end has been pushed out and the building extended with wood to form a garage for one car. The two stone corners built into the hill at the back of the building are rounded, a bit of masonry that is easier to build and strengthens the corners.

A series of flat stones are set into the ground beside this garage to form stairs up the hill to the long, narrow, story-and-a-half house that rests atop. This house, now clad in aluminum siding, has a raised-seam metal roof and dormers. Three distinct sections are visible. On the south is a four-bay frame section with a one-story porch under the main roof span. This section, the first, was built in the 18th century and was later remodeled in the middle of the 19th century. The door enters a hallway that bisects this block of the house and exits through a door on the west. Seven doors open into this hall, each is beautifully grained to look like mahogany. Closed stairs lead to the second floor. To the left of the hall is the parlor with a fireplace, whose elegant mantel has a flared shelf and fluted pilasters. Behind the parlor is a small room with peg rail on three sides. These rooms can be entered independently through hall doors but also have a door on the wall between them. 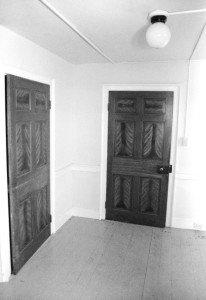 On the north side of the hall is the nineteen foot by fourteen foot living room. This stone addition is a three-sided, two-bay structure. This room has a simple mantel over a fireplace that is now fitted with a heating stove. One door has six raised panels and woodwork trimmed with ovolo molding typical of 18th century work. A small room has been added onto the back of the living room. The basement beneath this section has thick stone walls that are buttressed with additional stonework at various heights.

The large kitchen occupies the northern three bays of the house and was added to the right side of the living room block. Closed stairs to the basement and to the upper floor are built along this joining wall. The most interesting feature of this room is its service fireplace, now partially bricked over but still revealing the original iron door of its beehive oven. This door still opens to reveal a broad, shallow oven space with an oval brick ceiling. The floor of the oven is also brick, supported on close-set, hand-hewn timbers, which form the ceiling of a small shed that is attached at the north end of the kitchen. This shed has a gable roof built over the top of the oven.

Hand-planed beaded boards finish the stairway and upper hall in the first section of the house. Four batten doors with thumb latches lead to two chambers with sloped ceilings, a closet and a large central room above the living room. On the north side of this room, a grained door leads to yet another bedroom that can also be accessed from a steep set of stairs in the kitchen. At one time, this segment of the house was but a single story. The stone wall in the attic still shows the shadow of an earlier, lower gable.

The National Park Service has long wanted to acquire the Roulette Farm but has never had the funds to do so. When Howard Miller and his wife decided to sell their farm after 42 years, the Mellon Foundation of Pittsburgh was willing to fund the effort. The Conservation Fund negotiated the deal with a leaseback option for the Millers. In only ten weeks the parties went to settlement. At closing, the Conservation Fund turned title to the property over to the National Park Service. 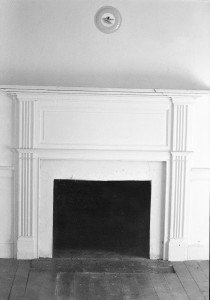 In 1785, Joseph Reynolds purchased 45 acres of land, part of a parcel patented as Joe’s Lott, from Joseph Chapline for £150. Other parcels were added in 1789, 1794, and 1801. It is likely that Reynolds built at least the first section of the house during this period. Reynolds sold the farm to John Miller in 1804 for fifteen pounds an acre. Miller may have added one or both of the two northern sections of the house. William Roulette was descended from Jean Louis Roulette, a noted French engraver and a Huguenot whose family was driven from France because of their Protestant religion. William Roulette married Miller’s daughter Margaret; he then purchased the farm from his father-in-law in 1853. It must have been the Roulettes who updated the formal areas of the house, changed the woodwork and added the dormers and the handsome grained doors in the central hall.

The Roulettes lived in the house when the forces of history surrounded them. It is said that Roulette, his wife and five children hunkered in the basement as the Battle of Antietam raged around them. When the Union forces advanced on the sunken road, Roulette ignored his own safety and ran out to cheer them on. During the battle, more than 10,000 soldiers traversed the farm and more than 700 Confederate soldiers were buried there.

After the battle, Roulette applied for reparations. Page after page of beautiful script under the heading,

listed Roulette’s losses: …6 Hogs, 13 Shoats, 3 Calves, Barrels of Flour, Bushels of Potatoes and Apples, Blacksmith and Carpenter tools, Bacon, Lard, Sugar, Vinegar, Butter, Molasses, Saddle Bags, Damages to House and Barn, Half Bushel Measures, Grain forks, Rebuilding Worm fencing, Dried cherries, 6 Gallon Blackberry Wine…on and on for a total of $2,496.27. Roulette had lost many of the things that made the farm function. He was never paid.

The farm remained in the Roulette family until 1956 when Howard and Virginia Miller purchased it and made it their home for more than 40 years. They have been good stewards. Few alterations were made and original materials were saved. When new, energy-efficient windows were added, Howard kept the old sashes and will give them to the Park Service. The farm has now passed into the public domain to be preserved as part of the turbulent history of the Civil War.

Epilogue: A structural evaluation of all the buildings on the farm has been completed and a proposal submitted to the National Park Service for the rehabilitation and restoration of the farm to the 1862 period. The cost of this project is estimated to be $3.6 million. Once completed, it would be interpreted as a living farm showing rural life in 1862 in western Maryland.

This article appeared in the Herald-Mail Sunday, February 28, 1999 as the 112th in the series.