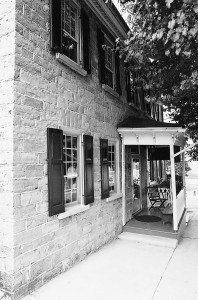 In Sharpsburg, a large stone house stands on the south east corner of Main and Church Streets, a venerable relic in an historic town. Joseph Chapline, Sr., Indian fighter, early settler, holder of vast tracts of land, laid out this town near a great spring that rose in a field he had once planted in tobacco. He patented the land as Joe’s Lott in 1758, surveyed it in 1762, and founded the town the following year. One hundred eighty seven lots were laid out, each 103 feet wide by 206 feet deep, except for the four slightly smaller ones at the town square. These lots were offered for sale at two pounds ten shillings each. 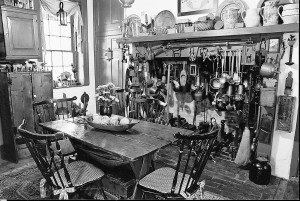 Lot 145 at the corner of Main and Church Streets was sold to Shadrock Harmon on April 23, 1765, for three pounds. Rent of three shillings, six pence was to be paid to Joseph Chapline on March 26th each year. Merry Stinson’s research for this nomination to the National Register of Historic Places found that the four deeds from 1789 to 1834 used incorrect numbers to describe the property. She states that Benjamin Tyson purchased the property in 1792 for seven pounds, five shilling and sold it to John Amon for £22.10 twelve years later, suggesting that Tyson may have begun the stone house that Amon completed. In 1839, Samuel Detrick sold it to Daniel Piper for the price of $1,705. This deed specified, as the earlier one had, that Piper was to pay rent, now 78 cents a year, to the heirs of Joseph Chapline on July 9, 1839, and forever after. The stone section of the house was built during these 74 years, probably before the turn of the century; but the owner and builder are not known. Was Samuel Detrick a descendant of Harmon, an heir? No records have come to light to solve this question.

In 1857, the house passed from Daniel Piper to his son Henry. Henry’s daughters Elizabeth and Mary Ellen were given the house …for natural love and affection… in 1890, about the time their father died. Lizzie (Elizabeth) Dye and Mary Ellen Smith sold the property in 1924 to Raleigh Sherman. Lizzie’s first husband was Raleigh Sherman, and this was their son Raleigh, who never married. The house descended to Mary Ellen’s son and his wife M. Victor and Sallie Smith in 1931, after Sherman’s death. It remained in the family until 1968, when John and Rosita Ray fell in love with the old place and set about making it their home.

The front façade of the two-story, stone house is built of carefully cut stones, while other elevations are rubble stone. Massive stone chimneys rise at either gable end, and flat arches with seven carefully prepared voussoirs top each door and window opening. The Piper House is five bays wide with a one-story porch sheltering its central entrance. This porch has scroll-cut splats in its balustrade and appears to be a later addition. At the rear of the house is a two-story, four-bay brick ell added about 30 years after the original house was built.

The wide, six-paneled door under a four-light transom opens into the entrance hall. Elegant stepped woodwork, trimmed with ovolo molding worked into crossettes, surrounds doors to the right and left. The doors themselves have been grain painted to imitate mahogany. 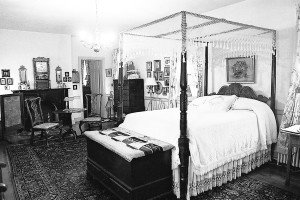 On the east side of the hall, two small rooms have been made into one, now the library, with two fireplaces. Probably when Piper added the brick wing, the original mantels were replaced with black marble ones, and a closed cupboard was built in the space between. To the west, the living room has a single fireplace with a carved period mantel that is also a replacement, lovingly stripped of paint and refinished by Rosita. Window architraves at the front of the house also have crossettes. There are chair rails, hand-planed window jambs and original iron box locks with lever handles throughout the house.

A door at the rear of the living room opens into the dining room, which is in the brick wing of the house. Entrances open on the left to the porch and on the right to Church Street. A broad, square arch expands across the back of the room. A double, folding door and a single door once closed this space. Because the room is not large and wall space is at a premium, these doors have been stored in the barn, leaving the room permanently opened into the kitchen. In the kitchen is a shallow fireplace with a simple, original mantelpiece and another door opening onto the porch. Beyond the kitchen, at the end of the wing, is the keeping room with a large service fireplace and closed cupboards on either side.

In the entrance hall, stairs rising to the second floor have a turned Victorian newel post and turned balusters, later additions. These stairs rise to a landing from which three steps lead to the second floor of the wing. On the opposite side of the landing four steps lead into the second floor of the stone section of the house. This short section of steps retains the original balusters, turned with blocks; and the steps to the attic have simple square balusters. The front of the hall has been converted into a bath, as in many old houses. A single, large bedroom with a fireplace occupies the west side. The mantelpiece is original as is the chimney cupboard. The east side of the hall contains two smaller bedrooms, one with a fireplace and the other with two closets. Both closets have two original, raised-panel doors.

The door to the wing once entered onto the second-floor porch, which then had doors to both rooms on this level. The closer and much larger room was built as a ballroom for entertaining guests. Now a bedroom, a large closet has been built across the north end of the room, facing the fireplace with a period mantel. The smaller back room, accessed originally only from the porch, was the slave room. Oral tradition says that the last slave to be sold from the slave block in Sharpsburg was Emory Summers who belonged to the Pipers and lived in this room.

The lower porch opens into the garden with its original stone retaining walls and its period flowerbeds lovingly created and tended by Rosita. To the back are fruit trees, an herb garden surrounded by a white picket fence and a gazebo. There is a small barn, red painted, and a potting shed that once was a chicken coop; but the stone springhouse and the old grape arbor have been gone for many years. Next door is a later building that was built as a Civil War Museum and is now run by John. John and Rosita lead a quiet life, serene and paced, moving to the rhythms of the Piper House.

Epilogue: Piper House was listed in the National Register of Historic Places in 1999. Rosita continues to work on general repairs and maintenance. She doesn’t want to change Piper House, she just wants to preserve it.

This article appeared in the Herald-Mail Sunday, October 4, 1998 as the 108th in the series.